Today, we’re fortunate to have Tara M. Sinclair, Associate Professor of Economics and International Affairs and a scholar at the GW Regulatory Studies Center at The George Washington University, as a Guest Contributor.

There has been a lot of debate lately about the costs of regulation for the US economy. In a Regulatory Policy Commentary posted on December 19th, Kathryn Vesey, a research associate at the GW Regulatory Studies Center, and I discuss our preliminary findings from a study of the macroeconomic impacts of changes in the “regulators’ budget,” i.e. the part of the US federal government budget allocated to developing and enforcing federal regulations.

We were inspired to take on our study by a policy bulletin from the Phoenix Center. They argue that federal regulatory expenditures are an enormous drag on the US private sector macroeconomy. Their abstract reports the following findings:

“Even a small 5% reduction in the regulatory budget (about $2.8 billion) is estimated to result in about $75 billion in expanded private-sector GDP each year, with an increase in employment by 1.2 million jobs annually. On average, eliminating the job of a single regulator grows the American economy by $6.2 million and nearly 100 private sector jobs annually. Conversely, each million dollar increase in the regulatory budget costs the economy 420 private sector jobs.”

Not surprisingly, these results have caught the attention of people concerned about federal regulatory spending, such as in this blog by House Majority Leader Eric Cantor and this Statement of Judiciary Committee Chairman Lamar Smith. We wondered, however, how sensitive the findings might be to different specifications.
Therefore, we began with the same vector autoregression (VAR) framework as was used in the Phoenix Center study. Following their approach we measured regulatory agencies’ budgets based on data provided by Susan Dudley and Melinda Warren in their annual report on the regulators’ budget, although we updated the data by one year as compared to the Phoenix report. Here’s a graph of the data: 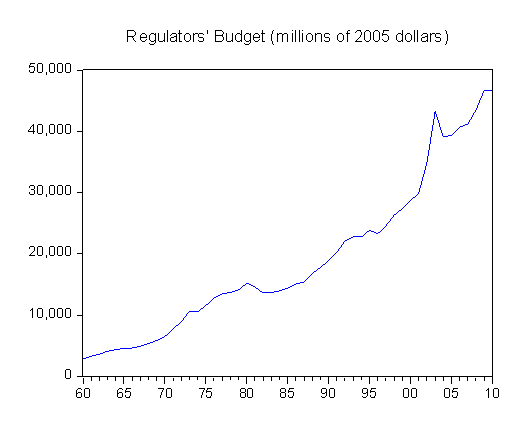 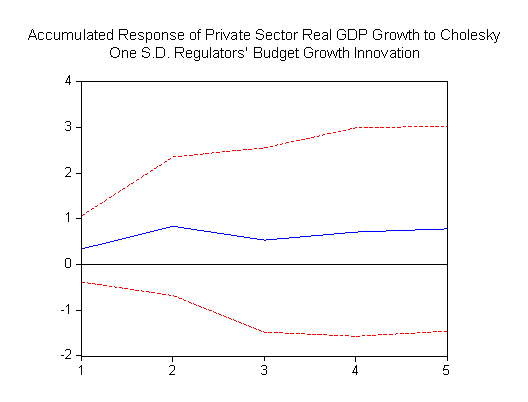 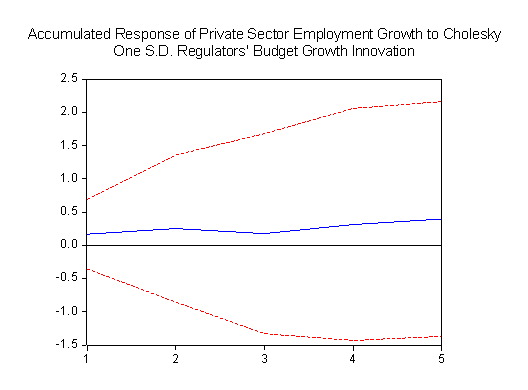 The key characteristic to notice is that although the estimates suggest a positive relationship for both employment and real GDP growth with regulators’ budget growth, these estimates are clearly well within the standard error bands which suggest that we’re really finding no effect at all.
The lack of statistical significance in our results could be explained by a number of factors. For example, as is the case with more commonly used proxies for regulatory activity, such as number of pages in the Federal Register or Code of Federal Regulations, the Regulators’ Budget is a blunt measure of regulation. Of particular concern when using this measure is that one substantial outlier in the budget, Transportation Security Administration spending, is by far the biggest driver of regulators’ budget growth over the last decade. It is also possible that different types of regulatory spending have diverse effects on the economy, and that these effects may vary at different times. Our findings suggest, however, that on average the macroeconomic effect of changes in the regulators’ budget appears to be minimal, or at least undetectable based on the data and statistical methods available.

23 thoughts on “Guest Contribution: US Federal Regulatory Budget and Macroeconomic Outcomes: What Do We Know?”