I was sitting in a briefing recently, where I heard how US GDP would be measurably affected by the floods in Thailand –- specifically through the shutdown of production of key auto parts. [0] That reminded me of the supply-chain-propagated impact of events nine months earlier, following the earthquake and tsunami in Japan. Here’s the trade-related part of the assessment from my colleague Isao Kamata’s article in the La Follette Policy Report, “The Great East Japan Earthquake: A View on Its Implication for Japan’s Economy”:

Impacts of Disruption
of Supply Chains

The Tohoku and northern Kanto regions severely damaged by the Great East Japan Earthquake had been populated by many firms that produce materials
(such as metals and chemicals) and parts of motor vehicles and electronics. The disaster damaged these firms and stopped their production activities; it also stopped or diminished the production activities of non-disaster-affected firms that used the products of the disaster-damaged firms, because of the shortage of those intermediate inputs. This phenomenon of disrupted supply chains amplified the impacts of the disaster on manufacturing production and expanded the impacts broadly to other (non-damaged) regions in the country.
The impacts of the disruption of supply chains have been the largest in the transportation equipment industry that includes manufacturing cars, trucks and their parts. According to statistics from Japan’s Ministry of Economy, Trade, and Industry (METI), the total manufacturing production in March 2011 was 15.5 percent lower than that in the previous month, which was the largest decrease for 58 years since the production index was established. More than a half of this decrease was due to a drop in production in the transportation equipment industry, which experienced a 46.7 percent decline in March 2011, the disaster month. The industry further decreased production by 1.9 percent in April, while the total manufacturing production recovered by 1.6 percent in the same month. This large impact on nationwide manufacturing production should indicate the complexity of today’s supply chains that have been globally constructed for production efficiency and cost minimization. It may also be that intermediate products supplied by the disaster-damaged firms had been so specialized that the “downstream” producers cannot readily switch to alternative products or suppliers. The large nationwide decrease in manufacturing production in March likely is not solely due to the disrupted supply chains but also to the rolling electricity blackouts prompted by the accident at the Fukushima Daiichi nuclear power plant. Rolling blackouts were not implemented in April.
An initial fear was that the impact could become more severe if the disruption of the supply chains continued. If “downstream” producers, such as a General Motors truck plant in Louisiana, anticipated that the shutdown or partial operation of the disaster-damaged firms, they might seek material from other firms to maintain production. With the global nature of supply chains, those alternative suppliers could be in other countries. One concern is that if new supply chains are established, Japanese firms damaged by the earthquake and tsunami might find they are excluded from the market when they are able to restart manufacturing of intermediate products. This scenario could permanently lower Japan’s manufacturing production and exports.
However, the operation of the disaster-damaged Japanese firms and the supply chains recovered very rapidly, due to large efforts of those firms themselves as well as related “downstream” producers to recover. A METI survey shows that, as of early April, more than 60 percent of the damaged firms have been restored, and another 30 percent were expected to be restored by summer 2011. Their actual restoration seems to have been even faster.

I had wondered whether this event would spur a reversal of the development of supply chains. [1] It’s too early for a quantitative assessment, but clearly managers are thinking hard about this issue, particularly in regard to China. From FM Global Supply Chain Risk Study: China and Natural Disasters – A Case for Business Resilience:

Nearly nine in 10 companies surveyed (86 percent) are more reliant on China as part of their supply chain for their key product lines than they are on Japan (43 percent). 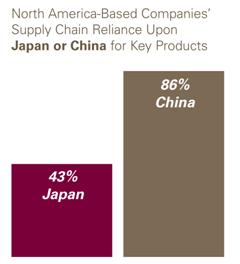 There are a variety of ways to respond to such a risk. One way is to make sure there are multiple suppliers. Another way is to increase in-sourcing; this is what I speculated might happen as risks of disruptions abroad increased, and transportation costs remained elevated [2] [3]. Figure 5 illustrates how the surveyed firms are considering responses to these perceived risks. 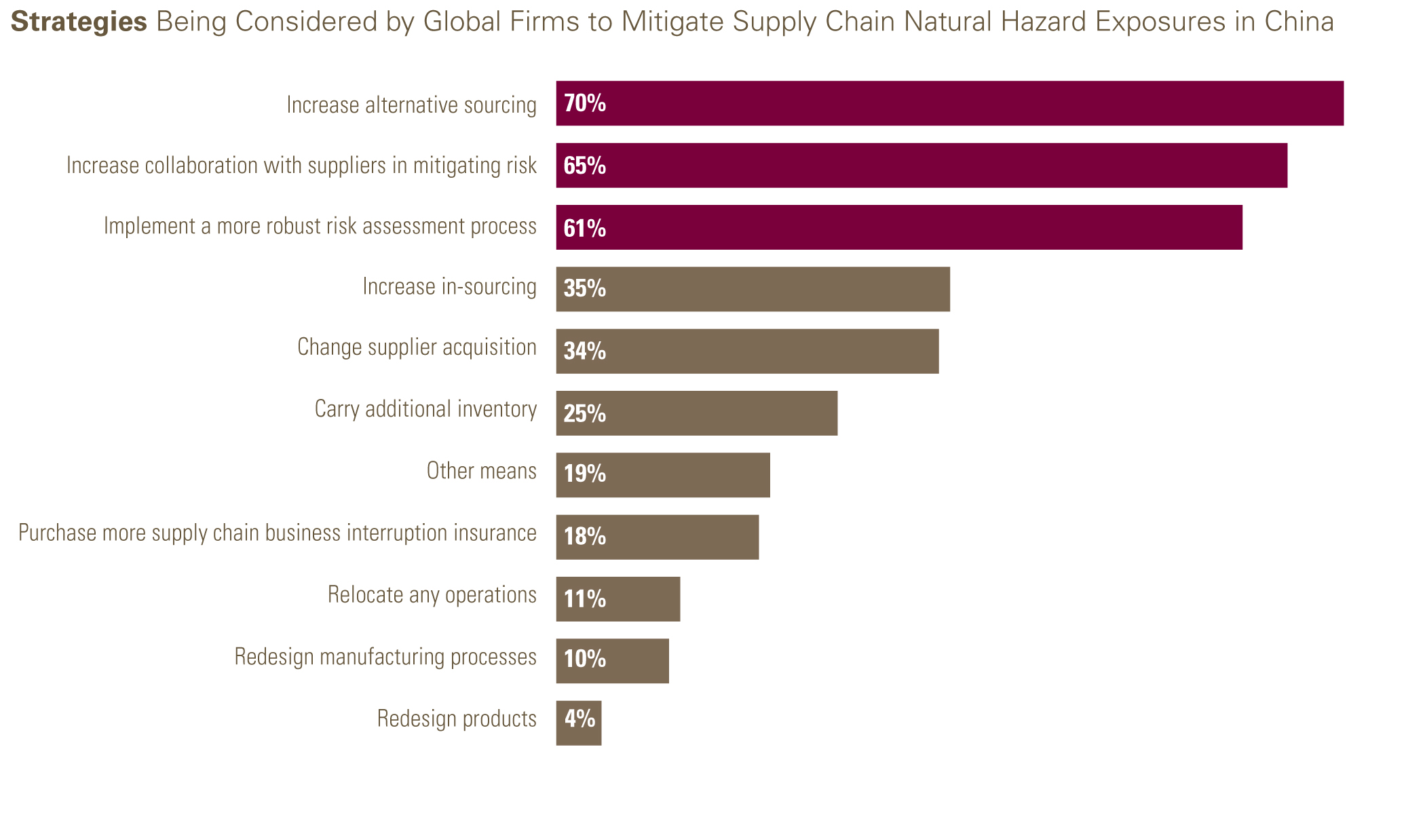 To me, it looks like relocating production back to the US is pretty far down the list (4th). Given the difference in labor costs, one can think of this as either unsurprising, or surprisingly high.

The topic of offshoring/outsourcing will be covered in Professor Kamata’s Public Affairs 856 course, taught this Spring at UW Madison. (Spring 2011 syllabus.) And on this coming Tuesday at 3:45, Jon Vogel (Columbia University) is presenting “An Elementary Theory of Global Supply Chains” with Arnaud Costinot and Su Wang, in the International Workshop at UW.