In a Guest Contribution today, John Kitchen (U.S. Treasury, formerly Chief Economist, Office of Management and Budget) addresses the issue of “Financing U.S. Debt: Is There Enough Money in the World — and at What Cost?”. The comments are based on a paper recently published in International Finance (Winter 2011), co-authored with Menzie Chinn. The views expressed are the author’s and do not represent the views of the U.S. Treasury.

From the abstract to the paper :

With the outlook for continued U.S. budget deficits and growing debt — and the uncertainties regarding their financing — we examine the role of foreign official holdings of U.S. Treasury securities in determining Treasury security interest rates, and the resulting implications for international portfolio allocations, net international income flows, and the U.S. net international debt position. … Although relationships suggest that the world portfolio could potentially accommodate financing requirements over the intermediate horizon, substantial uncertainty surrounds the likelihood of that accommodation and the associated effects on interest rates and adjustments in international portfolios. Notably, unprecedented levels and growth of foreign official holdings of U.S. Treasuries will be required to keep longer-term Treasury security interest rates from rising substantially above current consensus projections.

Although the United States has had little trouble financing its large budget deficits in recent years and at low interest rates, the results of the paper show the extent to which Federal Reserve policies (from expanding its holdings of Treasuries and government-backed securities) and the large purchases of Treasuries by foreign governments and central banks (foreign official assets) have contributed to keeping longer-term Treasury security yields low (and low relative to the low short-term interest rates from Federal Reserve policy). Once the U.S. and major developed world economies return to a more established economic expansion, however, the United States likely will face greater challenges in financing its debt — and at a higher cost with much higher interest rates. 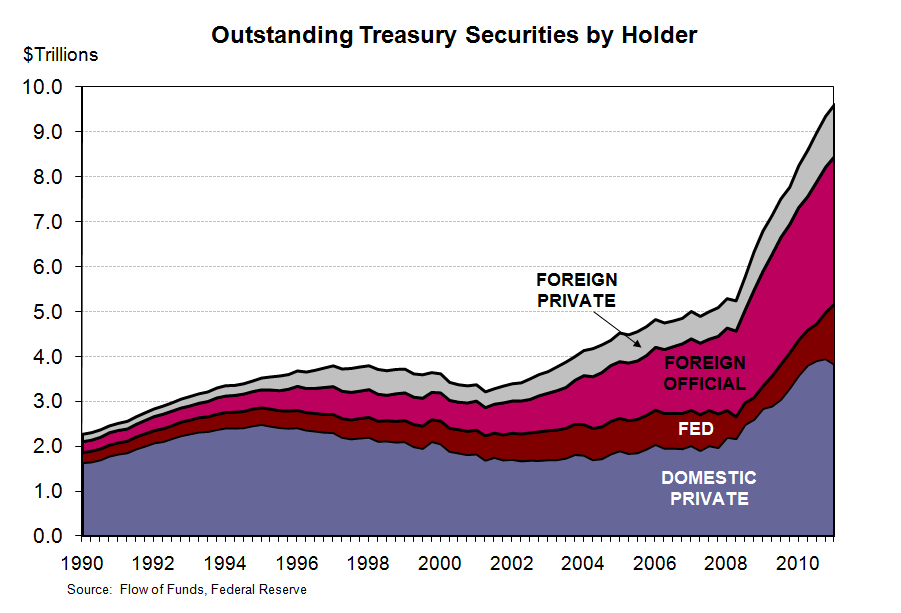 The preferred equation in Kitchen and Chinn for estimating the effects of the various factors determining U.S. Treasury interest rates is given by: