From the latest issue of the Milken Institute Review, “Trends: Better Living Through Inflation” (co-authored with Jeffry Frieden):

The politics of debt is, if anything, more daunting than the economics. A debt crisis typically degenerates into bitter political conflict over who will bear the burden of the adjustment. Some of the conflict may be among countries, with creditor nations trying to force debtors to pay off in full and debtor nations rebelling against measures that could conceivably make that possible. Other political battles take place within countries, as taxpayers, bankers, government employees, pensioners and investors jockey to avoid being saddled with the costs of working off the accumulated debts.

If we simply choose to wait for the world to find acceptable formulas for sharing sacrifice, we may be in for nearly a decade of snail’s pace growth — a truly global lost decade. …

Our recommendation: Conditional inflation targeting now, by keeping the Fed funds rate near zero and supplemented with other quantitative measures as long as unemployment remained above 7 percent or inflation stayed below 3 percent:

When nominal interest rates are kept below the rate of general price increases, inflation reduces the real burden of debts denominated in local currency. To put it another way, as prices rise and wages follow, debtors (households, businesses and governments) find it easier to service their debts and can more readily resume regular economic behavior.


The idea may seem radical, but it’s hardly unprecedented. After World War II, the United States inflated away a portion of the debt that it had accumulated in the war years — and did so even though the economy wasn’t facing an actual debt crisis. An analysis by
Joshua Aizenman (University of California at Santa Cruz) and Nancy Marion (Dartmouth) points out that the federal government came out of the war with a debt equal to 109 percent of GDP, substantially more than the debt-to-GDP ratio the country faces today. But all it took to (nearly) halve the ratio between 1946 and 1955 was a mix of reasonable economic growth turbocharged by relatively mild (on average, 4 percent) inflation.

This is not a new observation. In Lost Decades (W.W. Norton), Jeffry Frieden and I wrote:

Government revenues keep up with inflation, but the debt doesn’t — and so its real weight declines. This is why countries with heavy foreign debts typically run inflation rates double those without. Many countries with foreign debts in their own currency reduce their real debt burden by allowing their currency to drop in value, so that foreigners get repaid in less-valuable currency. (p. 188)

The typical counter-argument is that any move toward a higher target inflation rate raises a possibility of a hyper-inflationary spiral. To place things in perspective, consider current inflation in the US and the Eurozone:

Figure 1: Annual inflation, measured by CPI for US (blue), for eurozone (red). Latter is HICP. Source: BLS via FRED, ECB, and author’s calculations.


Not only are current inflation rates quite muted in the US and the Eurozone; inflationary expectations are well-anchored [0], and can stay anchored if the target is conditioned. In his discussion of our article, Ben Casselman in the WSJ’s RTE blog noted:

In a speech last fall, Chicago Fed President Charles Evans laid out the argument this way: The Fed’s implicit inflation target is 2%. The Fed doesn’t have a widely cited numerical target for unemployment, but a conservative estimate of the “natural,” or underlying, rate of unemployment is 6%.


“So, if 5% inflation would have our hair on fire,” Mr. Evans said in September, “so should 9% unemployment.”


Unemployment has come down some since last fall, but it’s still at 8.2%, nowhere close to the Fed’s “maximum employment” mandate. By Mr. Evans’s logic (which he explains more fully in his speech), the current rate of joblessness is equivalent to inflation running at 4.2% — more than double the Fed’s target rate.


Mr. Evans has argued the Fed should consider allowing inflation to run above its target until unemployment falls to some pre-determined — and pre-announced — level. 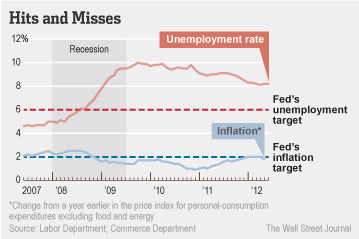 Figure from Ben Casselman, “Number of the Week: Could Inflation Revive the Recovery?” WSJ RTE (July 21, 2012).


Note that our argument here focuses only on the balance sheet and government debt aspects. As discussed elsewhere, a higher general inflation rate facilitates the relative price adjustments which are of particular importance in the Eurozone [1] [2], and would also help revive the moribund housing sector in many countries.

One particular challenge in the Eurozone, where arguably the benefits of higher inflation would be the greatest, is that the definition of “price stability” would have to be altered.

Update, 7/24 noon Pacific: The repeated reference to (allegedly) already high inflation spurred me to refer readers to this post by Ed Dolan on the psychology of price perceptions.

Today, even among Democrats, economic policy is in the hands of deficit and inflation hawks. Their policies plainly benefit too narrow a segment of the population. The bond-holding class doesn’t have to sacrifice a penny of its wealth as long as the mantra of “shared sacrifice” applies solely to Americans who earn wages and pay mortgages. For the latter, a little taste of inflation may mean a lot. Without it, the whole economy may continue to just stagger along, and in the long term that’s not good for anybody.

56 thoughts on “The Path Not Taken … Thus Far: Debt Deleveraging by Inflation”