The debt ceiling and implications of:

”We Republicans need to be willing to tolerate a temporary, partial government shutdown.”

“I think it is possible that we would shut down the government to make sure President Obama understands that we’re serious.”

The long term nominal interest rate is the average of expected short term interest rates (the expectations hypothesis of the term structure), plus the term premium associated with liquidity effects (lp), and a premium associated with sovereign risk (rp). In general, for US Treasurys, we suppress the last term. But it is the last term that is relevant in the current debate; if the failure to resolve the debt ceiling manifests itself in a higher rp, then debt dynamics can become more problematic. To see this, consider this expression.

How Likely Are We to Default, and When?

The Bipartisan Policy Center has compiled data to make a guesstimate of the date at which the Treasury’s extraordinary measures will be exhausted. The resulting calculations are depicted below:


Now what happens once extraordinary measures are exhausted? Then expenditures will be limited to daily revenue and cash on hand. Once those funds are exhausted, the Treasury according to BPC will default on financial obligations. The call for partial government shutdown, say paying our soldiers but not vendors, does not appear feasible.


First, the legal precedents for such an option –- that is to prioritize spending –- are unknown. [1], pp.8-9 Second, it is unclear whether it is technically feasible to do so, given Treasury’s computer systems (it is conceivable that debt payments could be prioritized over nondebt payments [2]). Hence, a partial shutdown, sparing essential services such as defense (or air traffic control, for those of us who fly a lot), would seem to face some obstacles. Here is BPC’s tabulation of the situation that would confront the USG on 2/15/2013:


The astute observer will note that on this particular day, the $30 billion outflow for interest payments alone exceeds the $9 billion in revenue. Hence, regardless of the technical feasibility of prioritizing payments (it is unclear how the policymaker quoted above would like payments to be prioritized), on a day like this day, then, the USG would seem to be technically in default on US debt (not paying other creditors would also be default, just not a debt default). This is the logical implication of not raising the debt ceiling. 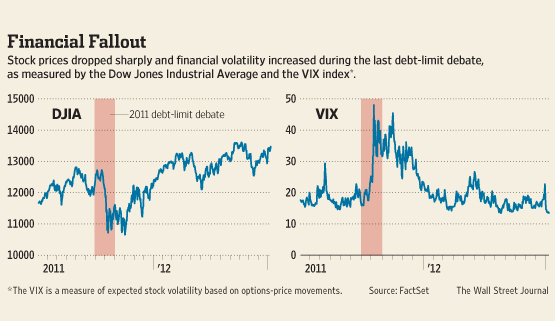 
Further, many commentators have argued that uncertainty depresses output, as discussed previously. Baker, Bloom and Davis (2013) have attempted to measure economic policy uncertainty and the impacts on economic output. Figure 4 depicts the evolution of the Baker-Bloom-Davis index:


Notice the spike at 11/08; that spike is associated with going to, but not over, the precipice. Baker, Bloom and Davis (2013) estimate that a 112 point innovation in the index leads to a 2.3% reduction in GDP after 4 quarters (peak response). The jump in uncertainty associated with the previous debt ceiling impasse was about 120 basis points (bps) (which is not quite the same as an “innovation”, but I’m pretty certain the difference is inessential in this calculation). Suppose for instance we have a default which pushes the index up 240 bps, so a back of the envelope calculation, assuming a similar elevation of uncertainty, suggests a 4.6% reduction in GDP after 4 quarters. 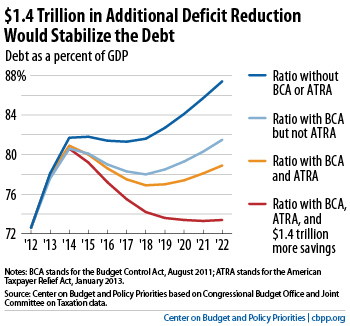 
The question policymakers need to ask themselves is whether it is necessary to chance a self-inflicted wound in order to try to balance the budget via spending cuts.

My worry is that the consequences of throwing sand (or bolders) into the wheels of global finance are insufficiently comprehended in by some of our policymakers in key veto positions within the legislative branch. Those who have faith that actors in the financial system can mitigate any damage arising from technical default by means of careful positioning and hedging should remember back to September 2008, when it was believed the financial institutions were prepared for the bankruptcy of a relatively small investment bank.

Update, 9:35AM Pacific, 1/16: Jeff Frankel provides some views on the debt ceiling debate and possible remedies.

30 thoughts on “How to Induce Explosive Debt Dynamics”