In its newly released Budget and Economic Outlook, the CBO has published new estimates of potential GDP. In conjunction with the most recent estimate of GDP, it appears that we are making halting progress on shrinking the output gap.


With the output gap still relatively large (6.1% as of 2012Q4, in log terms), and monetary policy accommodative, it seems to me we should re-evaluate what policymakers consider the relevant fiscal multipliers. I’ve been thinking about this as I’ve written a new survey on fiscal multipliers. The interesting point is that, as I caught up on the newer and newer literature, I found that the consensus moved toward larger and larger fiscal multipliers. From the paper:

Perhaps the most important insight arising from the debates over fiscal policy during and after the great recession is that the multiplier depends critically on the conduct of monetary policy. This insight is obvious if one thinks about policy in a standard IS-LM framework, where the interest rate is constant either because of accommodative monetary policy (Davig and Leeper, 2009), or because the economy is in a liquidity trap. Christiano et al. (2011) provide a rationale for this effect in the context of liquidity trap in a DSGE.


Coenen et al. (2012) show that in DSGEs, the degree of monetary accommodation is critical. When central banks follow a Taylor Rule or inflation forecast based rules, then multipliers are relatively small. However, when monetary policy is accommodative – that is interest rates are kept constant – then the cumulative multiplier is greater.


This insight is of particular importance because estimates of multipliers based upon historical data are likely to be less relevant in current circumstances, where interest rates have been kept at zero since 2008.


There is some evidence that the effects of fiscal policy in Europe have been unusually large in recent years (see Blanchard and Leigh, 2013). One of the reasons is that the zero lower bound has prevented central banks from cutting interest rates to offset the negative short-term effects of fiscal consolidation.

See also Reichling and Whalen (2012) for discussion. Returning to the survey:

Many of the earlier studies assumed the impact of fiscal policy was homogenous across different states of the economy. Recent work has sought to relax this assumption. Given that the size of the multiplier is more relevant in certain circumstances than others, accounting for heterogeneous effects is critically important.


Auerbach and Gorodnichenko (2012a, 2012b) and Fazzari et al. (2012) use VARs which allow the parameters to vary over expansions and contractions. Baum et al. (2012) condition on the output gap. The common finding in these instances is that multipliers are substantially larger during recessions.


To highlight the variation in the multiplier for the US, I reproduce Figure 5 from Auerbach and Gorodnichenko’s (2012b), which plots their estimates of the multiplier over time.


Hence, fiscal multipliers are largest exactly at times when expansionary fiscal policy is most needed. Estimates of multipliers based on averaging over periods of high and low activity are hence useful, but not necessarily always relevant to the policy debate at hand.

Historical estimates of the fiscal multiplier also condition on data when the financial system is operating normally, or is at least not highly impaired. However, the financial conditions during the crisis were arguably abnormal. To the extent that credit constraints were more binding (e.g., Eggertsson and Krugman, 2012), households could be expected to behave in a more “Keynesian” fashion, with less reference to “permanent income”. This would tend to result in a larger multiplier. See also Fernández-Villaverde (2010).


Corsetti, Meier, and Müller (2012), confirm empirically (using VARs) that during times of financial crisis, fiscal multipliers are larger. They conjecture that liquidity constrained households are more pervasive during crises. They add the caveat that this finding holds true when public finances are strong.

First, it is interesting that many types of models, including DSGEs, when modified to account for accommodative monetary policy, indicate larger multipliers than found in the previous – pre-liquidity trap – literature. Furthermore, typically empirical estimates allowing for heterogeneity find that fiscal multipliers are larger during periods of large economic slack than otherwise. These findings will not be surprising to Econbrowser readers, as I have noted these findings over the past few years. These findings will be surprising to those who ignore the academic literature because most of the findings conflict with their priors. (e.g. here).

Second, given that sequestration is likely to proceed, then we are adding additional fiscal drag on top of that already in the pipeline. With larger multipliers, the negative impact might very well be larger than expected on the basis of conventional multiplier estimates (e.g., those at the midpoint of the ranges cited by CBO). Here is Goldman Sachs’ latest estimates of impact per year. 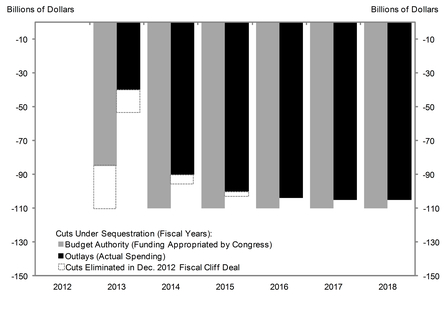 
With the output gap as large as it is, we should be pushing fiscal policy the other direction. At the very minimum, we should not implement cuts in current expenditures; rather they should be targeted at out-year expenditures, when output is closer to potential. We knew this before; now we have even more reason for holding to this view.