Against a backdrop of people who are dismissive of data and expertise, it is refreshing to see analysts rise to the challenge of tracking the economy while the government shutdown delayed the release of critical macroeconomic data. From Jim Stock of the CEA, “Economic Activity during the Government Shutdown and Debt Brinksmanship”:

Here is Figure 1 from the report. 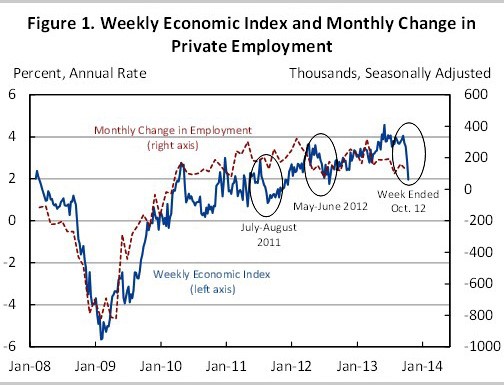 What is the bottom line obtained from Figure 1? Economic activity dropped considerably due to the government shutdown. I’m sure there are commentators in certain circles who thought there was little impact (e.g., [1] [2]), and in some sense could not be contradicted because government statistics were not being released (how’s that for a strategy for winning an argument?). However, the Weekly Economic Indicator puts the arguments of the nay-sayers to rest.

For those who follow the indicators for the macroeconomy, the statistical approach will sound familiar. In fact, it is similar in concept to the Chicago Fed National Activity Index (CFNAI). Of course, this makes sense, since that index was based on the statistical approach forwarded by Stock and Watson (1999). (The point of this documentation, of course, is to pre-empt the “statistics-deniers” who no doubt will complain that the methodology is bunk, or some other such nonsense — example here).

Following implications for the impact on economic activity follow directly:

This paper shows that a range of indicators show that sentiment, job creation, consumption, and some elements of production grew more slowly in the first half of October than in previous months. Moreover, it combines all of these indicators into a single measure termed the Weekly Economic Index which is consistent with a 0.25 percentage point reduction in the annualized GDP growth rate in the fourth quarter or a reduction of about 120 thousand jobs in October, based solely on the indicators available covering the period through October 12th. These estimates could understate the full economic effects of the episode to the degree it continues to have an effect past October 12th—as it most likely would.

16 thoughts on “Better to Light a Candle…”