Over the period of the Great Moderation, has inflation responded linearly to the output gap?

With GDP surging 4.1% SAAR in the third quarter [0], I soon expect to hear cries of inflation fears (example here). But it’s important to remember that even this rapid growth leaves a large output gap, on the order of 5%, expressed in log terms. (Note that I guesstimate the CBO’s potential GDP by applying the ratio of 2011 GDP’s in 2005Ch.$ and 2009Ch.$.) 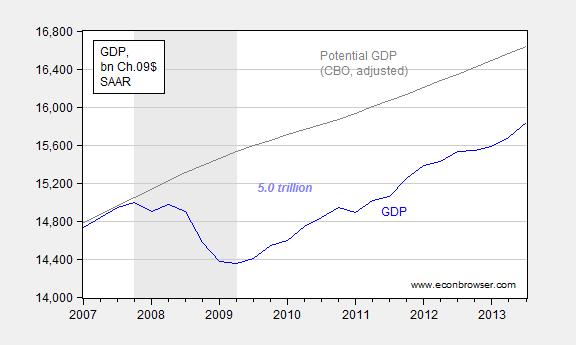 
Even with the pieces apparently in place for accelerated growth, I don’t believe inflation is an imminent concern. That’s because of what the data — as opposed to what some “theories” (e.g., money base increase necessarily causes inflation) — seem to indicate. In particular, here’s a scatter plot of CPI inflation and lagged output gap, 1986Q1-2013Q1: 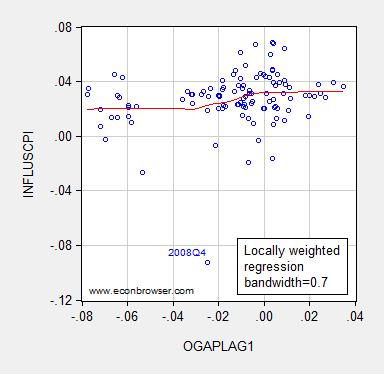 
I rely upon the pre-benchmark GDP data because I have CBO estimates that are consistent with these data.

Interestingly, the slope coefficient is essentially zero from output gaps from -8% to -3% (log terms). From -3% to about 4%, the slope is positive, averaging about 0.21. Notice this pattern shows up if the personal consumption deflator is substituted for the CPI. 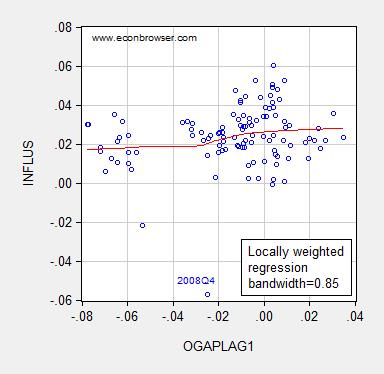 
Obviously, this is not conclusive proof of an asymmetric Phillips curve. In particular, I’m only examining a nonlinearity in a bivariate scatterplot. Other variables one might think of interest – particularly expected inflation – are not included. As pointed out by others (e.g., Krugman), the expected inflation term does not seem of particular importance during the era of the Great Moderation, perhaps because of the anchoring of expectations. 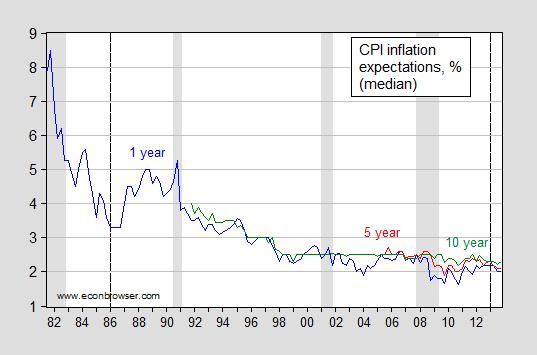 
In other words, inflation expectations stabilized considerably post 1985, at least as measured by the SPF.

This phenomenon suggests that the typical Phillips curve specification:

can be reduced to:

Estimating the relationship over the 1986Q1-2013Q1 period, using a dummy variable to allow for a slope change when the output gap is larger than -0.03 yields the following results.

The coefficient on the interaction term, while not significant at conventional levels, is significant at the 41% msl. Taken literally, the slope nearly doubles when the output gap is larger than -3%.

For a skeptical view on nonlinearity associated with potential, see Ball and Mazumdar (2011). Coibion and Gorodnichenko (2013) argue that household inflation expectations are not as well anchored. Earlier posts on nonlinear aggregate supply here and here.

5 thoughts on “Phillips Curve Nonlinearities in the Data”