A cautionary tale for my undergraduate economics students

Reader Steven Kopits wonders why, in order to show the relative prominence of government spending, I don’t merely take the ratio of one real index to another real index. Specifically, he admonishes me:

I find this presentation confusing. … Is it not possible to present this data as a simple percent of GDP?

The answer is no. The reason is that real quantities (in the national income and product accounts) are measured using chain-weighted series. From Whelan (2000):

The weights change over time, mitigating the problem with substitution bias. However, a consequence of measuring quantities using this approach is the loss of additivity. The sum of the chain-weighted components does not equal the corresponding chain-weighted aggregate. This point is highlighted in Figure 1. 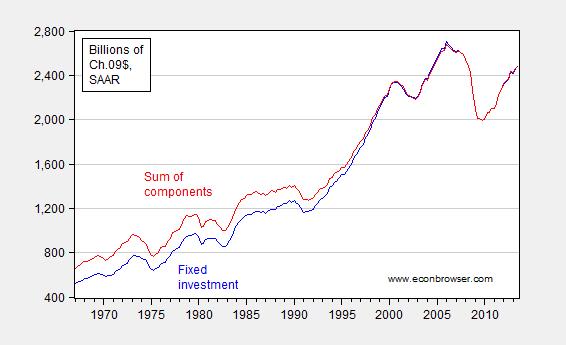 Now, suppose one wanted to measure the importance of one component by taking a ratio — for instance equipment investment to total fixed investment. One could calculate the ratio of nominal equipment to nominal fixed investment. This, however, would not be informative regarding the quantities. Because of the non-additivity aspect of chain weighted measures, one can’t take the simple ratio of real variables.

However, one can compare the growth rates of the two series, for instance Z and W. Taking log ratios accomplishes this goal. Consider the difference in cumulative growth rates.

The right hand side of the expression is the log ratio of Z/W, minus a constant, in the [square brackets].

Now consider Figure 2, which shows the nominal ratio and the log ratio of real series. 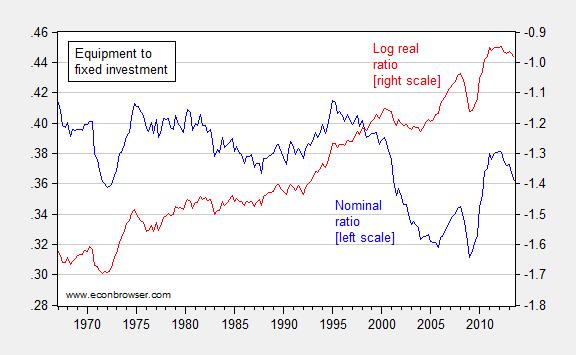 
The level of the right hand scale has no meaning, except that an upward trend indicates equipment investment grows faster than aggregate fixed investment. The difference between the initial value and the final is equal to the cumulative growth differential.

The bottom line: when discussing variables like GDP, and its components, understanding of their measurement in practice is useful.