In my ten years living in Madison, this has been the coldest Winter thus far. Keeping in mind everything is probabilistic, it’s likely that I have anthropogenic climate change to thank for experiencing this event. [1] [2] [3] (Just like one can’t say Hurricane Sandy was directly a result of global climate change, the likelihood of such events rises with global climate change.)

From NASA via RealClimate comes this graph of annual temperatures taking into account El Nino and La Nina phenomena:

This figure illustrates that while temperatures vary with the El Nino and La Nina phenomena, allowing for a mean shift, one sees a clear pattern toward overall warming temperatures (notice no hiatus once looking at the data in this fashion). Now, while the annual averages are rising, global climate change models imply greater climate variation as well. (I’ve discussed the greater dispersion in temperatures in summer months here, that is spread as well as mean change.) NOAA has generated indices to measure climate extremes; components are reported here. 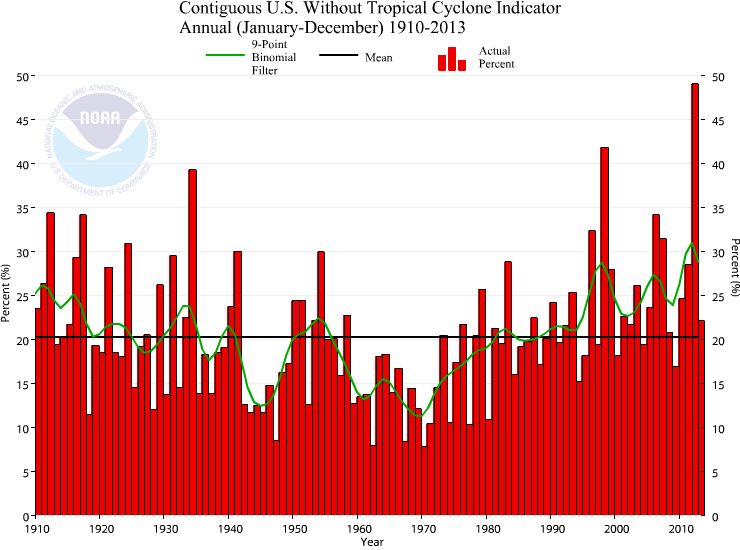 The data indicates that extreme high/low temperatures and extreme precipitation are rising in frequency.

I was thinking (again) about the economic impact these extremes as I was contemplating Representative Marsha Blackburn’s twofold (and seemingly internally inconsistent) assertion today that there was no consensus on anthropogenic climate change, and even if there were, we should think about all the positives that would come about from an upward shift in the mean and increase in support of the distribution of temperatures in the United States (maybe there’s an upside to West Nile fever! [4]).

Here are the immediate impacts (Informal poll: How many people had trips cancelled because of the weather this Winter? I’m the first vote yes). 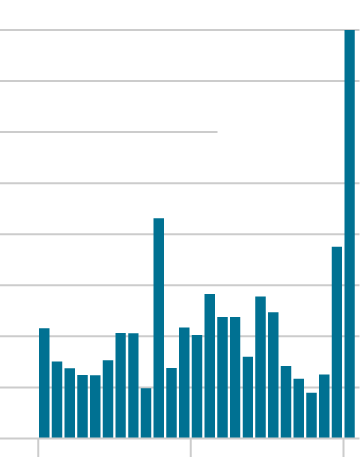 I wonder if any of those who argue better to adjust than to try to price carbon and were caught in those flight cancellations reconsidered there positions. That’s only partly facetious; I think climate change is going to impose substantial costs going forward, a lot more than just damage to sewer pipes and salt bills. [4]

These costs include power outages, estimated by CEA/DoE. 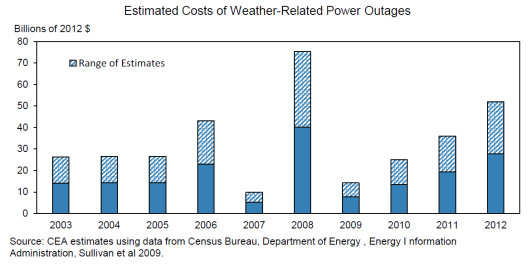 The Consensus on Anthropogenic Climate Change

As I mentioned earlier, Representative Blackburn argued that there was no consensus on the sources of climate change. I beg to differ — as do scientists themselves.

Here are the key graphs from “Expert credibility in climate change,” Proceedings of the National Academy of Sciences (2010). Note that UE denotes unconvinced; CE denotes convinced (by the thesis of anthropogenic climate change).

Another study, with similar results, from Eos (The Transactions of the American Geophysical Union) is here. The climatologists publishing on climate change tend to be the most convinced of anthropogenic climate change (97.4%, which in my book is pretty overwhelming).

Since Econbrowser has a large audience of people interested in economics, I thought it useful to post estimates of the human-activity-related component of global climate change (on average, warming), from a well-known econometrician. From Kaufmann, Kauppi, and Stock, “Emissions, Concentrations, and Temperature: A Time Series Analysis,” Climatic Change (2006): 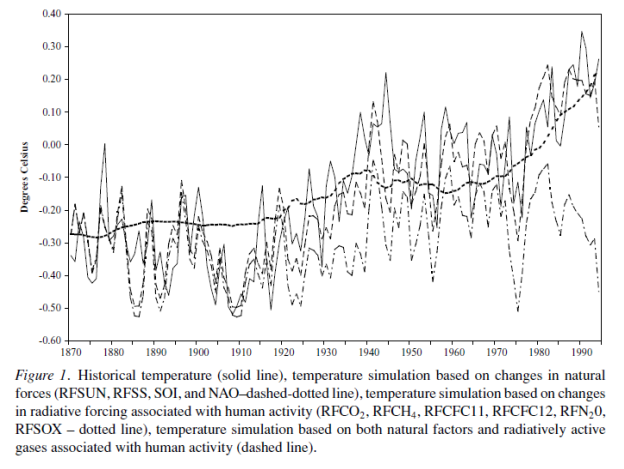 Returning to Representative Blackburn who plea for a cost-benefit analysis, I turn to a real expert on the subject, William Nordhaus. I am not sure what she means by cost-benefit is what Professor Nordhaus means.