With update links to CBO and the CEA comment on the minimum wage.

Despite the likely benefits, policymakers in Wisconsin make statements such as the following (from Fox6Now):

“I’m not a big supporter of artificially increasing the minimum wage. I think the marketplace is a much better way to go,” [Wisconsin Assembly Speaker Robin] Vos said.

The minimum wage is by definition the lowest hourly remuneration that employers may legally pay. As a legal requirement, it can only be changed “artificially”. The marketplace could alter the equilibrium wage rate, as supply and demand conditions change — but that would be changing, not the minimum wage, but … the equilibrium wage rate. I guess Speaker Vos means that the equilibrium rate — which has been delivered by the marketplace thus far — is the one we should be happy with. (Dr. Pangloss would nod in assent.) At this juncture, it’s useful to remember that, just like not all things organic are necessarily good for you, not all equilibria are optimal. A free market is not necessarily a competitive market, and in the presence of monopsony power and asymmetric information, one can imagine intervention improving outcomes.

In my view, an increase in the minimum wage could have an impact on income inequality in Wisconsin. According to EPI, 22.4% of the total Wisconsin workforce would be affected by the minimum wage (i.e., the floor would bind, and other wages not bound would rise in a ripple effect), a share slightly higher than that pertaining to the national workforce (21.3%). 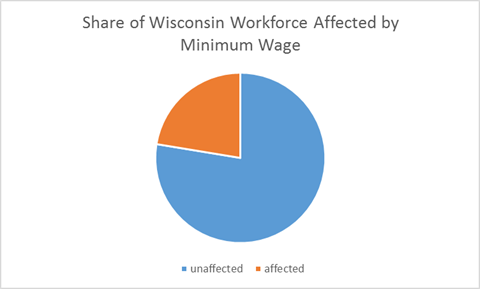 Figure 1: Share of Wisconsin workforce affected (both directly and indirectly) by a $10.10 minimum wage in effect by July 2016. Source: Economic Policy Institute; see EPI for details of calculations.

More importantly, for low income workers, an even greater share would be affected. 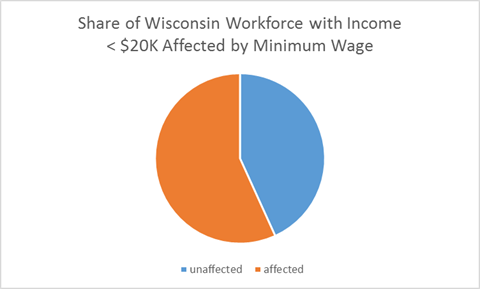 Figure 2: Share of Wisconsin workforce with income less than $20,000 affected (both directly and indirectly) by a $10.10 minimum wage in effect by July 2016. Source: Economic Policy Institute; see EPI for details of calculations.

To the extent that minimum wage increases tend to have negligible employment effects, the higher wages should increase the total low-income wage bill, as discussed in this post, which recounts the recent empirical literature, and provides a diagrammatic exposition elaborating on this point.

The President has voiced support for an increase in the minimum wage to $10.10 in three increments, as laid out in the Fair Minimum Wage Act. A time series plot of the minimum wage starting from 1960 is presented below, along with minimum wage that would obtain assuming passage of the FMWA in March (merely for expositional purposes — this is not a forecast!). 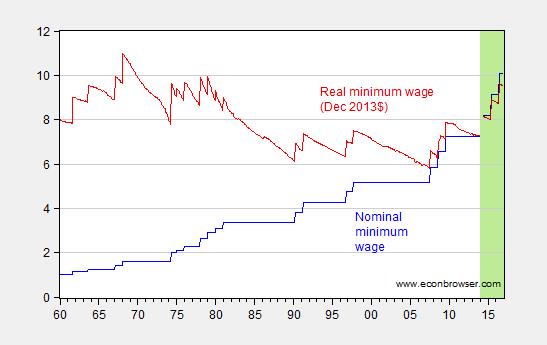 Note that the increase in the minimum wage under the FMWA brings the real minimum wage (assuming the mean WSJ forecast trajectory) back only to levels of April 1979 (the maximum is 10.79, in December 2013 dollars, recorded in February 1968). 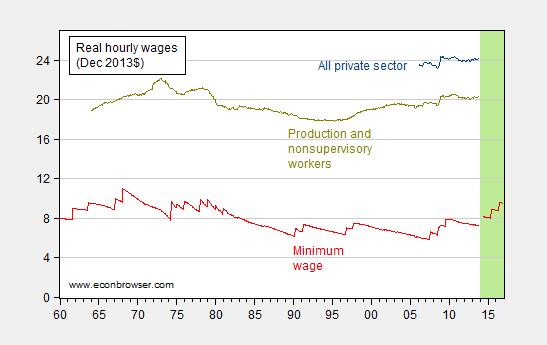 Nobody claims that raising the minimum wage will alone reverse fully trends in income inequality in place since (particularly) the 2000’s. However, if one wants to do something concrete and feasible about income inequality, this is one place to start.

Jason Furman and Betsey Stevenson at the Council of Economic Advisers recap the empirical literature on the effects of the minimum wage on employment, turnover, and productivity, in a blogpost yesterday.

CBO has released a report which notes the general improvement of the situation for low income households, and a dispersion of forecasts centered around small job losses. The CEA comments.

86 thoughts on “Elevating the Minimum Wage, in Wisconsin and the Nation”