Here are some immediate consequences of Russia’s intervention in the Ukraine. From Reuters:

Russian stocks and bonds plummeted on Monday and the central bank hiked interest rates, burning its way through as much as $12 billion of its reserves to prop up the rouble as markets took fright at the escalating tension with neighboring Ukraine.

Investors were ditching all Russian assets alike – the rouble, stocks and bonds. The market capitalization of the Russian rouble-denominated MICEX stock index fell some $60 billion since Friday, more than the $51 billion Russia spent on the Winter Olympics in Sochi last month.

Here is a longer term view of the evolution of the ruble, in the context of perceived tightening in US monetary policy. The ruble has been depreciating since the beginning of 2013, but the decline has accelerated in 2014, as depicted in Figure 2, using daily data. The depreciation in the ruble today has occurred despite an increase in the seven day policy rate from 5.5% to 7.0%, and the expenditure of roughly 2% of Russia’s foreign exchange reserves. 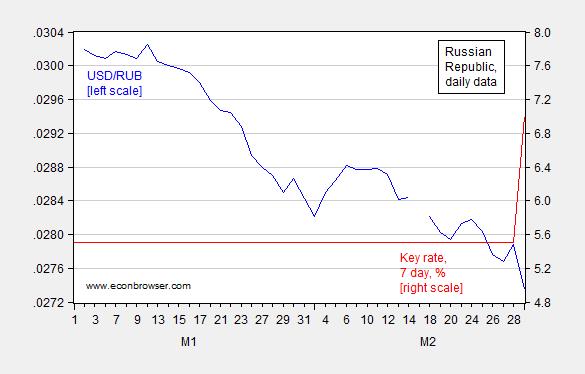 It will be interesting to see if this interest rate defense coupled with intervention in the forex markets prove successful. It surely must depend upon expectations — both of the central bank’s willingness to defend the currency (a central bank official indicated there is “big room” to increase rates further), the sensitivity of the economy to interest rate hikes, and anticipated Western responses. At the moment, there seems to be some bravado on the part of some market participants.

“Is Russia going to be cut off from the world? That is very unlikely given what Russia provides to the world, which are oil, gas, raw materials,” Alexis Rodzianko, president of the American Chamber of Commerce in Russia, said.

“Sanctions are less than absolutely likely because sanctions hurt both sides, maybe even the side applying the sanctions more than the side being sanctioned.”

The credibility of the interest rate defense is in my mind a little strained, given that growth was already forecasted by the IMF in January to decelerate from a modest 1.9% to 1.5%, going from 2013 to 2014 (q4/q4) (and y/y growth had been marked down a whole percentage point for both years, going from October to January WEO‘s).

I am a little more skeptical that there are some sanctions that could impose real pain on Russia. These include freezing individuals’ assets in the US [1]. Allowing exports of US crude in order to influence world prices (as sugggest by the CFR’s Richard Haass) seems unlikely — to me — to have a sufficiently large impact on global oil prices to have punish Russia noticeably. However, if the mere announcement of sanctions signals to market participants an extended period of financial turbulence, then the markets might nonetheless impose substantial pain on Russia.

Addendum: The ratio of short term debt to reserves is fairly low at the end of 2013Q3, at 16%. In comparison to some ratios shown in Chart 8 in this post, the ratio is fairly low. The Economists‘s capital freeze index in September placed Russia barely in the “orange” range,and outside the green range. [2]

…We feel that the biggest restraints for Russia are actually Russia’s economy and financial markets as well as the Russian people. Significant military action would destabilise Russia’s weak economy with acceleration in capital flight and dollarisation likely to prove increasingly difficult to combat despite the huge currency reserves (which are being drained at quite a clip), external debt hard to roll over, especially if the EU/US impose sanctions. …

5 thoughts on “The Ruble under Stress”