Total vehicle miles driven in the United States have not re-attained pre-recession peaks.

Upon inspecting Figure 1 in this post, reader Patrick R. Sullivan decries the current level of auto production. His reasoning?

Just curious how much the present demand still represents “pent-up demand.” With domestic production running at 300-350K per month and then dropping like a rock for three years, it would seem that just getting back to the old “normal” still represents “behind the curve.” There are plenty of anecdotal accounts of small fleets being run into the ground because owners are afraid to spend money on replacement vehicles.


I’d suggest there is still a story behind the chart that is not being told.

I agree that there is more aspects to consider. First, I think it is useful, when considering what is an appropriate level of production, to take into account what is the end-use of the product. In the case of motor vehicles, it’s miles driven. And here, the trend has been sideways — after a drop in 2009. 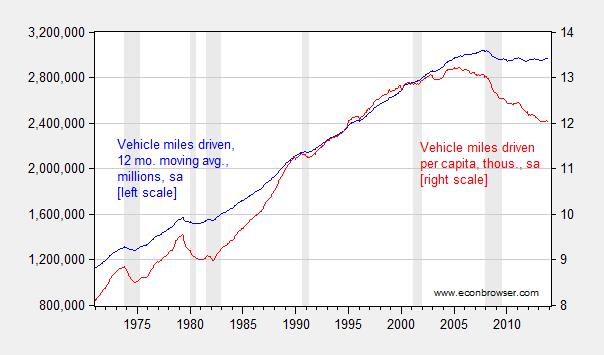 What is more interesting to me is the decline in per capita miles driven. This variable has dropped 9% (log terms) since 2005M08 (vehicle miles have fallen 2.1% since the miles peak of 2007M09).

Part of the reason for the reversed trend in per capita miles driven is surely elevated gasoline prices; however, this seems unlikely to be the only factor. 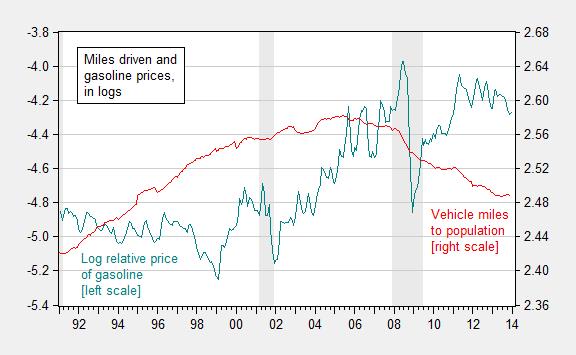 [G]asoline prices are just part of the story. The lack of growth in miles driven over the last 6 years is probably also due to the lingering effects of the great recession (high unemployment rate and lack of wage growth), the aging of the overall population (over 55 drivers drive fewer miles) and changing driving habits of young drivers.

29 thoughts on “Time for Some Traffic”