It’s interesting how “pro-business” policies do not appear to be conducive to rapid employment growth. 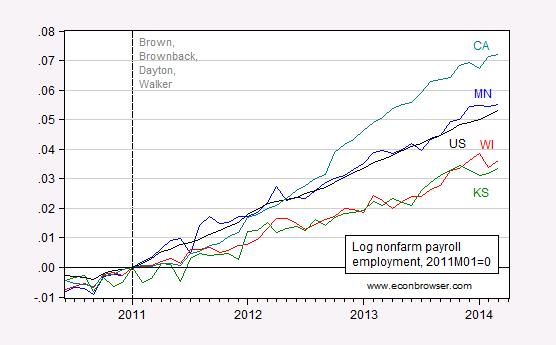 What about California? It is ranked 47th by ALEC-Laffer, and yet is doing the best in terms of employment amongst the four states. This does not deny the relevance of these indices, but for sure the correlation of the index with performance is not obvious to me. (These rankings are persistent — in 2012, Kansas and Wisconsin were ranked 26 and 32 respectively, while Minnesota and California were 41 and 38 respectively.) So, the higher the ranking according to Arthur Laffer, Stephen Moore (currently chief economist of Heritage), and Jonathan Williams, the poorer the employment growth.

Moreover, it is not apparent to me that broader measures of economic performance (i.e., the Philadelphia Fed’s coincident economic indices) tell a different story (see this post).

In terms of Wisconsin’s performance relative to stated goals, private nonfarm employment is projected by the Wisconsin Department of Revenue to fall far short of Governor Walker’s goal (reiterated 8 months ago) of 250,000 net new jobs created. 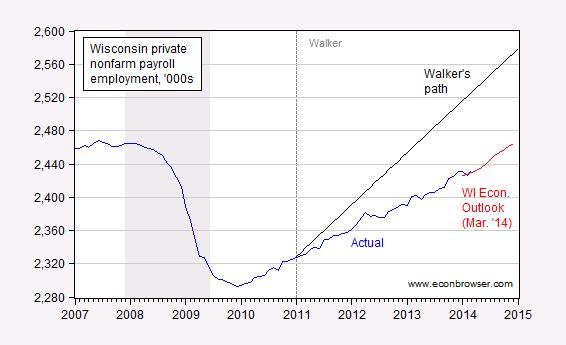 As of March, employment is lagging goal by 94,300. Using the Wisconsin Department of Revenue employment forecast (interpolated), employment will lag the trend goal by 108,400 in December 2014.

One final point. Some observers (e.g., the irrepressible Ed Hanson) have argued that January 2013 is the right point in time to assess the impact of altered fiscal policies in Wisconsin. The annualized month-on-month growth rate in Wisconsin was 1.3% in the first two years of Walker’s administration. Since January 2013, the growth rate has accelerated … to 1.3%.

Update, 7AM Pacific 5/10: An econometric addendum to this post is here.