That’s the title of a conference that took place at USC this weekend, co-organized by Joshua Aizenman, Menzie Chinn and Robert Dekle, and cosponsored by the USC Center for International Studies, USC School of International Relations, Journal of International Money and Finance, and the Federal Reserve Bank of San Francisco.

The papers focused on new international trends and developments in the wake of the global financial crisis, including the role of corporate saving/investment/net lending (figure 7), and official flows, in the global saving glut, the behavior of cross-border banking, the size of fiscal multipliers, fiscal rules and business cycle volatility, the implications of foreign exchange reserve accumulation, monetary aspects of Abenomics, and the competing options of macroprudential regulation and financial repression. 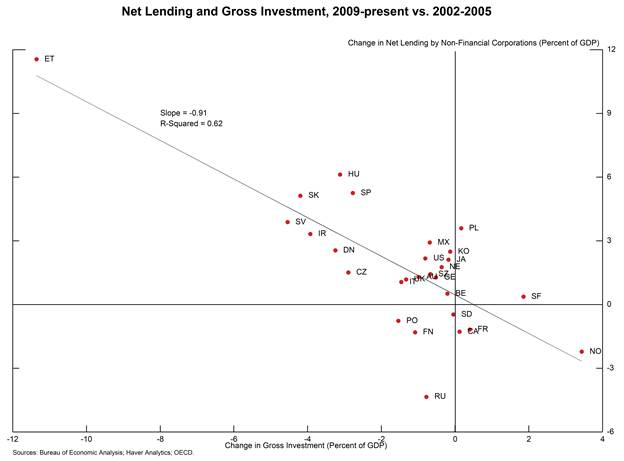 The agenda is here. I’ll discuss some of these papers at greater length in a subsequent post, but for now, here are links to the papers, and their abstracts:

Abstract: We examine the increase in the net lending (saving minus investment) of nonfinancial corporations in the period following the Global Financial Crisis. We consider whether this increase in net lending is an endogenous reflection of the current weak pace of growth or rather an outcome of firms’ desire to cut investment and hoard assets, and thus an exogenous drag on growth. Looking at G7 economies, we find that the increase in net lending (and its components) is in line with historical norms, given the path GDP growth, interest rates, and other relevant determinants. Moreover, we identify no pronounced reduction in the return of corporate earnings to shareholders through dividends or equity buybacks. As such we conclude that this is little evidence to support
the hypothesis that an extraordinary desire by corporations to save is hindering investment and thus the economic recovery.

The paper analyzes the effects of changes to regulatory policy and to monetary policy on cross-border bank lending since the global financial crisis. Cross-border bank lending has decreased, and the home bias in the credit portfolio of banks in the euro area has risen sharply, but not among banks outside the euro area. Our results suggest that expansionary monetary policy in the source countries has encouraged cross-border lending in euro area and non-euro area countries. By contrast, while increases in financial supervisory power or independence have encouraged credit outflows from source countries, tighter capital regulation has lowered cross-border lending since the crisis. However, these effects have largely been driven by euro area countries. The findings thus underline the importance of regulatory arbitrage as a driver of cross-border bank flows since the global financial crisis.

“Fiscal Multipliers in Expansion and Recession: Does It Matter Whether Government Spending is Going Up or Down” (paper)
Presenter: Carlos Vegh, John Hopkins University (co-authors Daniel Riera-Crichton and Guillermo Vuletin)

Abstract: We examine the composition of cross-border bank exposures between 1995 and 2012, focusing on the role of the international loan syndication market. Compared to other bank loans, syndicated loans are larger, have longer maturities and complex lender structures, and are extended to relatively safer borrowers. We show that on-balance sheet syndicated loan exposures account for almost one third of total cross-border bank loan claims and about half of the variation in these claims, suggesting that they are an important vehicle for cross-border lending to advanced and emerging market borrowers. We find that the share of syndicated loan exposures increased during the global financial crisis, mainly due to large credit line drawdowns and long maturities on outstanding loans extended in the pre-crisis boom.

Abstract: The Japanese currency has recently weakened past 100 yen to the dollar, leading to some criticism that Japan is engaging in a “currency war.” The reason for the recent depreciation of the yen is the expectation of higher inflation in Japan, owing to the rapid projected growth in Japanese base money, the sum of currency and commercial banking reserves at the Bank of Japan.

Hamada (1985) and Hamada and Okada (2009) among others argue that in general, the expansion of the money supply or the credible announcement of a higher inflation target does not necessarily constitute a “currency war”. We show through our empirical analysis that expansionary Japanese monetary policies have generally helped raise U.S. GDP, despite the appreciation of the dollar.

Government-directed, or official, financial flows (dominated by purchases of foreign exchange reserves) have exploded over the past 15 years and are now running at more than $1 trillion per year. Current account imbalances also reached record levels in recent years and they remain a major source of tension in international economic policy, despite a partial retrenchment since 2007. Advanced economies see emerging ones as frustrating needed current account adjustment via reserve accumulation aimed at holding down the values of their currencies. Emerging economies see their advanced brethren as trying to export their way out of recession via loose monetary policies that tend to weaken their currencies. Hence the much publicized talk of currency wars. This paper explores the first of these two arguments: Are official flows frustrating current account adjustment? Of particular interest is the extent to which official flows have a greater impact on current accounts in the presence of capital controls or other barriers to capital mobility. In addition, we explore whether there is a longer lasting impact of official flows on current accounts through the portfolio balance channel.

Abstract: Based on a dataset of 112 emerging economies and developing countries, this paper addresses two key questions regarding the accumulation of international reserves: first, has the accumulation of reserves effectively protected countries during the 2008-09 financial crisis? And second, what explains the pattern of reserve accumulation observed during and after the crisis? More specifically, the paper investigates the relation between international reserves and the existence of capital controls. We find that the level of reserves matters: countries with high reserves relative to short-term debt suffered less from the crisis, particularly if associated with a less open capital account. In the immediate aftermath of the crisis, countries that depleted foreign reserves during the crisis quickly rebuilt their stocks. This rapid rebuilding has, however, been followed by a deceleration in the pace of accumulation. The timing of this deceleration roughly coincides with the point when reserves reached their pre-crisis level and may be related to the fact that short-term debt accumulation has also decelerated in most countries over this period.

Abstract: Since 1998, Japanese economy has experienced consistent deflation and the
Japan’s government had responded to two economic shocks – first the global financial crisis of 2008-2009 then the devastating earthquake, tsunami, and nuclear crisis in March 2011 (henceforth 3/11). Somewhat surprising, though, it was not until early 2013 that the government took the most radical actions to reflate the economy with the inauguration of the new LDP cabinet led by Shinzo Abe.
Informed by the role of Central Bank Independence literature and the impact of ideas on domestic politics, this paper analyzes the factors that drove the Bank of Japan responses to the country’s economic challenges of the last 15 years to explain how and why the BOJ failed to adopt an aggressive monetary policy during this period. Our analysis hinges on the important role of international norms in Japan’s economic policy making.

This paper is meant to commemorate the thirtieth anniversary of Carlos Díaz-Alejandro’s classic article, “Good-Bye Financial Repression, Hello Financial Crash” (1985). Writing in the wake of drastic financial blowups in the Southern Cone, Díaz-Alejandro nonetheless argued that “a believable alternative system could be designed, avoiding many of the inefficiencies of financial repression…and blending both public and private financial agents”. It would take nearly three decades since the publication of this prescient work, but there are credible signs that such an arrangement is now emerging within some Latin American emerging economies (EEs).

We track the thinking on financial repression from the early 1970s up to the current period and note how this concept has come to encompass interventionist financial policies in both OECD and EE settings. We then turn to the era of financial liberalization in Latin America from the 1980s up through the 2000s, with an emphasis on Argentina, Brazil, and Mexico. We suggest that Latin American EEs like Brazil and Mexico have indeed proved capable of implementing the more “macro prudential” financial policies that have been much-discussed in the wake of the global financial crisis; on the other hand, the Argentine case confirms that the bad old days of financial repression, replete with credit allocation, exchange controls, and the inflation tax, are not entirely behind us. We close by noting that while achieving better financial balance and intermediation is key, the real goal for all three countries should be to address the structural and political economy challenges that limit investment, growth and a more equitable distribution of income. Fortunately, the sort of pragmatic and eclectic approach Díaz-Alejandro called for is a useful guide for the bigger challenges ahead.

“International Reserves Before and After the Global Crisis: Is There No End to Hoarding?” (paper)
Presenter: Hiro Ito, Portland State University (co-authors Joshua Aizenman and YW Cheung)

1 thought on ““Financial Adjustment in the Aftermath of the Global Crisis 2008-09: A New Global Order?””