(The can opener reference can be understood by clicking here)

From the House budget proposal:

In a report published in February of 2013, CBO concluded that reducing budget deficits, thereby bending the curve on debt levels, would be a net positive for economic growth. According to that analysis, a large deficit-reduction package of $4 trillion, which this budget resolution actually exceeds, would increase real economic output by 1.7 percent in 2023. Their analysis concludes that deficit reduction creates long-term economic benefits because it increases the pool of national savings and boosts investment, thereby raising economic growth and job creation. The greater economic output that stems from a large deficit-reduction package would have a sizeable impact on the federal budget. For instance, higher output would lead to greater revenues through the increase in taxable incomes. Lower interest rates and a reduction in the stock of debt would lead to lower government spending on net interest expenses. CBO finds that this dynamic would reduce budget deficits by a net $186 billion over ten years, including $82 billion in the tenth year alone.

Two observations, regarding the CBO “discussion” of the Ryan budget:

Regarding the first point, here is the quote from the CBO updated discussion.

The projections do not represent a cost estimate for legislation or an analysis of the effects of any specific policies. In particular, CBO has not considered whether the specified paths are consistent with the policy proposals or budget numbers that Chairman Ryan released on April 1, 2014, as part of his proposed budget resolution.

On the second point, the astute observer will note that these dynamic effects are emphasized only when Representative Ryan writes about the long term (2025 onward), as displayed on Page 94, Table S-6 of the House budget. Short run effects are in Table S-2. There is a very good reason for the de-emphasis of short term effects. One discerns this reason when one actually reads the CBO document cited in the House budget, and inspects Figure 2, on page 7. 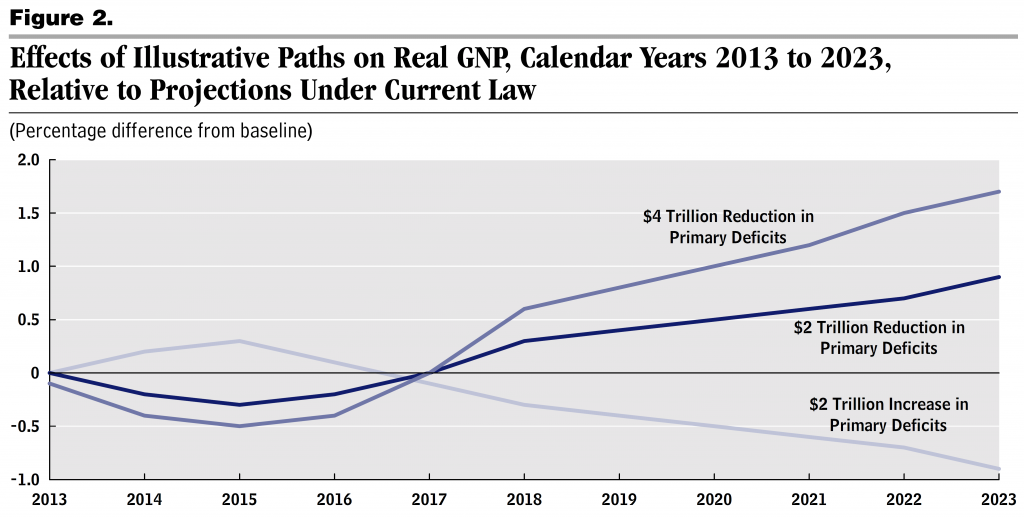 In other words, for a ten-year $4 trillion deficit reduction, in the subsequent four years, the net impact on GDP is negative. Figure 2 pertains to a $4 trillion plan implemented in 2014. The corresponding impacts for the current incarnation of the current House budget could be approximated by shifting forward the curves by one year. According to the CBO discussion of the Ryan proposal (Figure 4, page 9), if the Ryan budget is implemented, then by 2016, per capita GNP will be nearly a percentage point lower (-0.8% to be specific). Of course, by 2025, using midpoint estimates, output per capita would be higher. However, there is wide uncertainty regarding the impact, as indicated in Table 2: the range is from as little as 0.8 ppts to 2.6 ppts higher than baseline.

Stepping aside from the macroeconomic implications, it is of interest to observe the choices Representative Ryan has made in his cuts; these include $125 billion to SNAP (partly by implementation of work requirements, see page 63). According to CBPP, ten-year cuts to Medicaid and SNAP would constitute $0.9 trillion. This apparently this is his view of the “roadmap out of poverty”.

The CBO discussion of the Ryan budget did not incorporate behavioral responses due to changes in policies (e.g. workhouses implementation of work requirements associated with SNAP), but it also did not incorporate changes in government investment productivity that contributes to future output. For a case wherein supply-side aspects were incorporated into the dynamic-scoring process, see here.

Update, 9:15PM Pacific: Keith Hennessey compares the Ryan budget and the Obama budget, with the caveat:

In this post I’m just going to compare the short-term deficit and debt effects of the two proposals. While I’d like to use comparable numbers, CBO has not yet rescored President Obama’s proposal because the President released his budget six weeks late. So for now I’ll compare Ryan’s numbers to Obama’s. That is suboptimal but the best we can do for now, and I am confident it doesn’t change the overall picture. Let’s start with deficits.

The way this is stated, one gets the impression that the Ryan budget has been scored. I don’t know if this is what Mr. Hennessey intended, but of course, regardless of intent, it is a misleading statement, because the Ryan plan has not been scored either. CBO took at face value Representative Ryan’s spending and tax revenue numbers, and tabulated the macro feedback effects. Hence, it would not be right to compare a CBO-scored Obama budget to Ryan’s numbers, and Mr. Hennessey knows it (or at least should).

Update, 4/4, 11AM Pacific: From the chorus of the data-challenged, Ed Hanson asks:

Can you think of a time or occurrence in US history when The Fed Government drastically reduced its budget and borrowing and yet the economy boomed?

And Patrick R. Sullivan answers: “September 1945”, appealing to the NBER peak/trough dates. Well, a relevant question is what constitutes a “boom”, and these same people who argue that the current expansion is not a boom are happy to tabulate the post post-September 1945 period as a boom. All I can say is that they either must (1) not believe in reading data, or (2) have a radically different interpretation than I do of what a “boom” is. Here is my depiction of data around 1945; I will let the readers decide if post-1945 through 1946 was a “boom” (I’m willing to say it’s a recovery). Just ignore the 15%-odd decline in GDP, and the 20%-odd decline in industrial production (log terms). 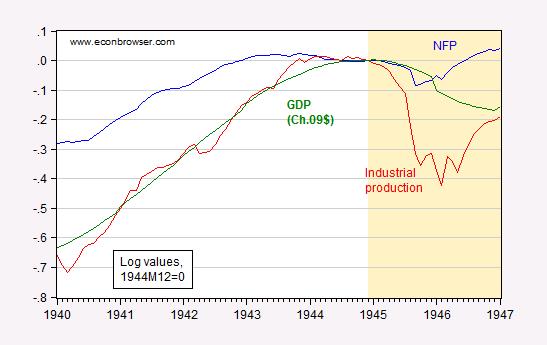 36 thoughts on “The Ryan Plan: Assume a Can Opener, Yet Again”