The authors examine a sample of 30 OECD countries over the 1986-2008 period, using the local projections method of Jorda (2005). In addition to allowing for differential effects depending upon whether the economy is in a contraction or expansion, an allowance is also made for differential impact depending upon whether government spending is going up or down. The resulting impulse response functions for recessions vs expansions are shown in Figure 4 from the paper. 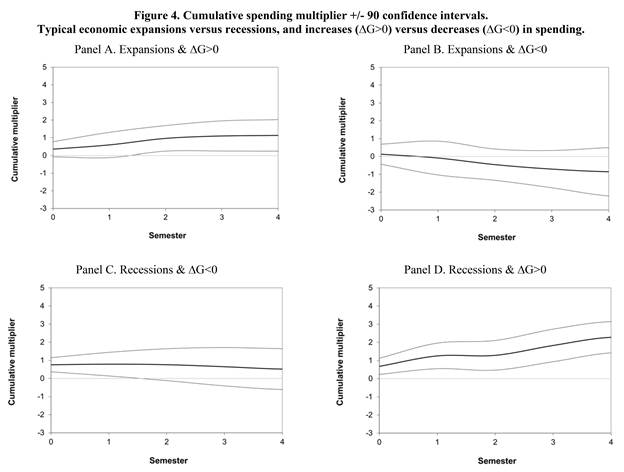 The authors also look for differential effects between extreme recessions and expansions. The resulting IRFs are shown in Figure 6. 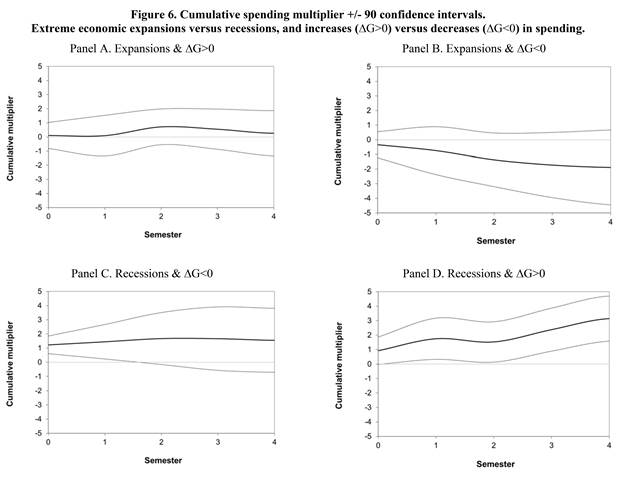 The obvious point is that expansionary fiscal policy during a extreme contraction is highly expansionary. As the authors conclude:

Maybe more subtle, yet very important, both for expansionary and contractionary fiscal policy, is the distinction between typical and extreme recessions. In particular, the long-run multiplier for a typical recession and government spending going up is 2.3 compared to 3.2 when focusing on an extreme recession. Moreover, while cutting spending during typical recessions reduces output by less than one, doing so in extreme recessions reduces output by more than one (at the very least in the short and medium run). Applied to the current debate on austerity in the Eurozone, this would imply that debt to GDP ratios would increase in response to cuts in fiscal spending.

I think this result is intuitive. When output is contracting due to some aggregate demand shock, there is likely to be a lot of slack, such that a Keynesian model is more apt than a Classical model. In addition, monetary policy is likely to be accommodative. In contrast, expansionary fiscal policy in an extreme expansion has an impact that is not significantly different from zero (note than in an non-extreme expansion, the multiplier for expansionary fiscal policy is still about one).

There is a question of what sort of mechanism delivers the observed asymmetry in responses across expansionary and contractionary fiscal policy, as pointed out by the discussant Yuriy Gorodnichenko (coauthor with Auerbach of a related paper) and other participants.

Nonetheless, following up on earlier discussion of how conventional estimates of fiscal multipliers can be misleading when the state of the economy or the conduct of monetary is not controlled for, [1] (paper here) it seems to be the case that those who argued that fiscal policy would be ineffective in the last recession are ever more seen to be in the wrong.

Paper link “Fiscal Multipliers in Expansion and Recession: Does It Matter Whether Government Spending is Going Up or Down”