Russian foreign exchange reserves, while large, are declining. Since reserve holdings (or lack thereof) are one of the best predictors of balance of payments/currency crises, it’s worth taking a look at their trajectory. (See Frankel and Saravelos, 2012 for a recent example)

First, consider a long span of quarterly data (through end-2014Q1): 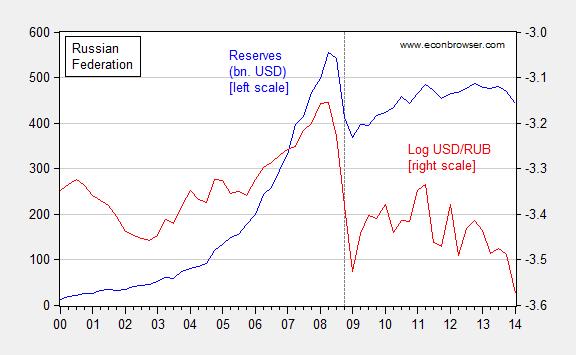 Next consider a shorter span (corresponding to the period after the dashed line in Figure 1, ending April 2014), at a monthly frequency. 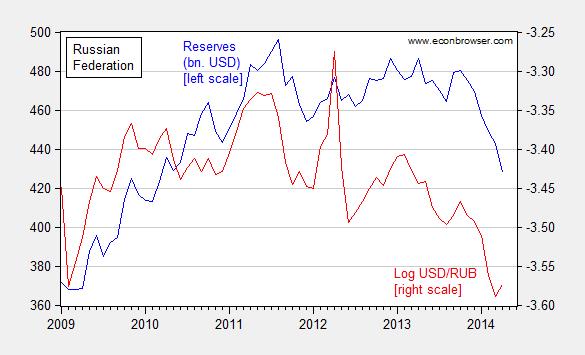 Both series correspond to end-month. Note the rapid decline in reserves ($14.8 billion in April), even as the ruble has stabilized (note further the policy rate has been raised to 7.5% already). Are Russian reserves high or low? That depends on the context. Figure 3 plots the time series of reserves to short term debt (an important variable for determining whether a country suffered a big growth deficit during the global financial crisis, according to Bussiere et al. (2013)), and relative to M2. 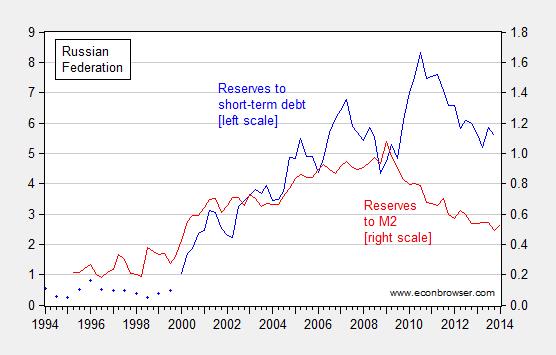 The reserves to M2 ratio is of interest because (following Calvo) M2 is approximately the amount of bank deposits that are sufficiently liquid that they could leave the country.

The reserves to M2 ratio has been declining, just like the reserves to short term debt ratio. The reserves to M2 ratio is now below 60%. Now, it’s hard to say whether this is a “low” number. By the standards of the countries embroiled in the East Asian crises of 1997, the 60% is pretty high (Thailand was at about 27% at end of 2006, Korea at 16%). On the other hand, capital account openness (as measured by the Chinn-Ito financial openness index) is higher in Russia today than it was in either of those two crisis countries in 1996. The fact that the capital outflow is so marked [1] is consistent with this view.

So, on the basis of short term debt coverage, Russia seems fairly secure. The fact that it runs a current account surplus is also very helpful. On the other hand, if the ratio of M2 to reserves continues to decline, then the situation might be come more worrisome for Russian economic policymakers (and a heightening of the VIX would probably not help).

1 thought on “Russian ForEx Reserves and Balance of Payments Vulnerabilities”