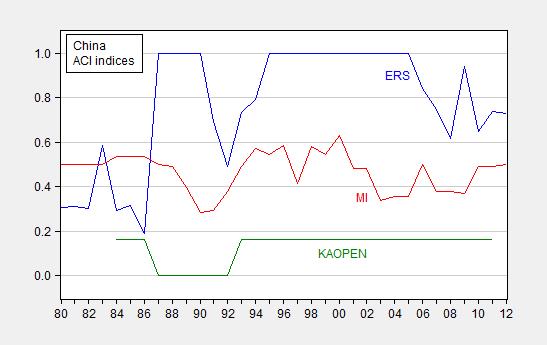 A policy panel at the Columbia-Tsinghua conference was chaired by Chaired by Shang-Jin Wei (Chief Economist Designate, Asian Development Bank, Professor of Economics at Columbia University, and NBER). The participants were:

Both He and Ma noted that capital account liberalization had already progressed to a certain extent, with Ma making the case more forcefully. Ju argued that premature liberalization of the capital account could lead to capital flight and and domestic financial crisis as the housing market collapsed. Some discussion of the Ma, He, and Ju presentations are reported in the People’s Daily.

The major point of my presentation was that development of the RMB as an international currency was not costless, despite the pride that might be engendered by such a outcome. In particular, an internationalized currency exposes an economy to external shocks, and some loss of monetary autonomy if other countries peg to it. Such already seems to be the case for China. Some of these points are discussed in this paper.

I couldn’t attend all the sessions at the Columbia-Tsinghua conference (there were at times parallel sessions), but here are some of the papers I caught.

What are the macroeconomic effects of tax adjustments in response to large public debt shocks in highly integrated economies? The answer from standard closed-economy models is deceptive, because they underestimate the elasticity of capital tax revenues and ignore crosscountry spillovers of tax changes. Instead, we examine this issue using a two-country model that matches the observed elasticity of the capital tax base by introducing endogenous capacity utilization and a partial depreciation allowance. Tax hikes have adverse effects on macro aggregates and welfare, and trigger strong cross-country externalities. Quantitative analysis calibrated to European data shows that unilateral capital tax increases cannot restore fiscal solvency, because the dynamic Laffer curve peaks below the required revenue increase. Unilateral labor tax hikes can do it, but have negative output and welfare effects at home and raise welfare and output abroad. Large spillovers also imply that unilateral capital tax hikes are much less costly under autarky than under free trade. Allowing for one-shot Nash tax competition, the model predicts a “race to the bottom” in capital taxes and higher labor taxes. The cooperative equilibrium is preferable, but capital (labor) taxes are still lower (higher) than initially. Moreover, autarky can produce higher welfare than both Nash and Cooperative equilibria.

The paper shows that foreign holdings of local currency government bonds in emerging
market countries (EMs) have reduced bond yields but have somewhat increased yield volatility in the post-Lehman period. Econometric analyses conducted from a sample of 12 EMs demonstrate that these results are robust and causal. We use an identification strategy exploiting the geography-based measure of EMs financial remoteness vis-à-vis major offshore financial centers as an instrumental variable for the foreign holdings variable.The results also show that, in countries with weak fiscal and external positions, foreign holdings are greatly associated with increased yield volatility. A case study using Poland data elaborates on the cross country findings.

Likun Wang (Goethe University Frankfurt) presented “Exchange rate, risk premium and factors: what can term structure of interest rates tell us about the dynamics of the exchange rate?”:

In this paper, I investigate the role of expectations on the current and future status of economies in determining the dynamics of the exchange rate, through the channel of risk premium for holding a currency. The risk premium is introduced as an additional term to a best-fit time series model and is instrumented by bilateral latent factors obtained from the term structure of interest rates. Results show that it can significantly improve the baseline model in terms of in-sample goodness of fit and out-of-sample accuracy of forecast in exchange rate changes. The non-linearity of the risk premium in latent factors further renders state-dependent and time-varying response of change in exchange rate to an identified monetary policy adjustment. Above findings hold for seven out of eight advanced-economy currency pairs (AUD, CAD, GBP, JPY, NOK, NZD, SEK against USD). Once included in the Fama regression, the risk premium can also help in solving the UIP Puzzle, which has been detected in the cases of GBP/USD and JPY/USD.

Other presentations (w/o papers online):

I’ve focused my review on the international/macro topics. Other fascinating issues in economics were also covered, including intergenerational mobility, retirement and higher education. For those, see the agenda.