That’s the title to today’s article in Reuters. I’ve been surprised that the Russian economy has taken as much a hit as it has, partly in response to sanction and spillover effects onto confidence from those sanctions. I think the skeptics of the efficacy of sanctions for hitting the Russian economy will have to re-assess.

From the Reuters article:

Russia’s central bank shifted the ruble’s trading band the most since the incursion into Ukraine started as it burns through almost $2 billion of reserves to stem the world’s worst depreciation since June.

The monetary authority sold $442 million on Oct. 7, data on its website show today. That excludes any interventions yesterday as the ruble slid 0.5 percent versus the target dollar-euro basket. The bank said it moved the upper band by 20 kopeks to 44.85 yesterday, a level the currency has since crossed to trade at 44.9126 by 4:09 p.m. in Moscow today. The ruble closed at 40 per dollar for the first time yesterday.

The boundary shift was the biggest since March 4, when President Vladimir Putin kicked off the incursion into Crimea that triggered a standoff with the U.S. and its allies and sent the nation’s assets tumbling. Central bank Governor Elvira Nabiullina has stepped up her defense after the ruble lost the most among global peers since June, hurt by a drop in oil prices and a domestic dollar and euro shortage stemming from sanctions.

The depletion of reserves through end-September and the ruble depreciation are shown in Figure 1. 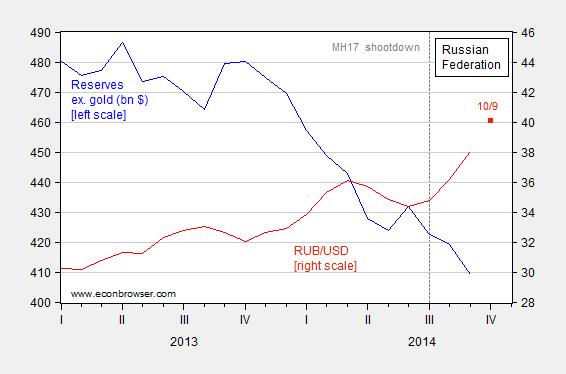 Reserve depletion occurs when current account plus financial account < 0, so most of the recent run-down in reserves shown in Figure 1 is due to capital flight (as the recent intervention occurred over the last four days).

For now, I’ll merely note that the IMF has 2014 q4/q4 growth rate tagged at -0.8%. This is somewhat less than posited in some worst-case scenarios, e.g., IIF, discussed in this post, World Bank in this post. But, as they say, it is still early days. (I’m still waiting for the 225 bp rise in the policy rate to fully percolate throughout the economy, and higher food prices to further depress consumer confidence).