If you dynamic score, dynamically score both expenditure and revenue measures.

Every piece of legislation has economic consequences. Most are small, but some are significant. When the CBO ignores them, it disregards the detrimental effects on economic growth of bad legislation as well as the positive effects on growth of good legislation.

While Professor Lazear argues for dynamic scoring of tax legislation, he also argues for scoring of spending components. This puts both Professors Krugman and Lazear in agreement with Alan Auerbach (UC Berkeley) as well as yours truly. Unfortunately, as Krugman observes I think correctly, the desire to implement dynamic scoring is driven mainly by political objectives (lower taxes overall) rather than a desire to do the economic analysis correctly. Or, — despite the fact that I don’t usually use sports analogies — as succinctly put by Tom Toles: 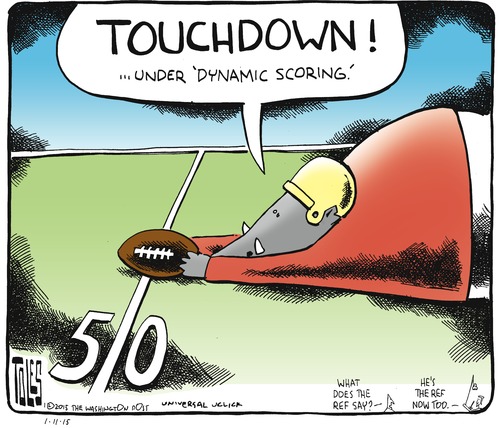 27 thoughts on “I Agree with Ed Lazear (and Alan Auerbach)!”