Today we are fortunate to have a guest contribution written by Joshua Aizenman, Dockson Chair in Economics and International Relations. This post is based on a presentation at the Society for the Study of Emerging Markets Panel session, AEA meetings, Boston, January 3, 2015.

The global proliferation of Sovereign Wealth Funds continues [see Figure 1], and includes by now growing number of manufacturing and non-commodity countries [China, Hong Kong, Korea, Singapore, France, Ireland, and others]. Recent research reviewed at the AEA 2015 Boston Meeting suggests that Sovereign Wealth Funds [SWFs] may provide a new margin of stabilization [see the enclosed PP file]. This role is of greater relevance for Inflation Targeting [IT] countries and in periods of heightened volatility. IT regimes may relegate the goal of real exchange rate stabilization and counter-cyclical fiscal policy to its SWF, via a fiscal rule. While international reserves managed by the central bank have comparative advantage in dealing with balance sheet exposure, the SWF deals with longer term saving, and fiscal stabilization. The possible gains of greater division of effort towards stabilization between the central bank and the fiscal authorities apply to all countries with functioning institutions. We validate the growing importance of liquidity management via SWFs for Emerging Markets. These policies mitigate the transmission from terms of trade shocks to the real exchange rate and, thereby, stabilize the domestic economy. 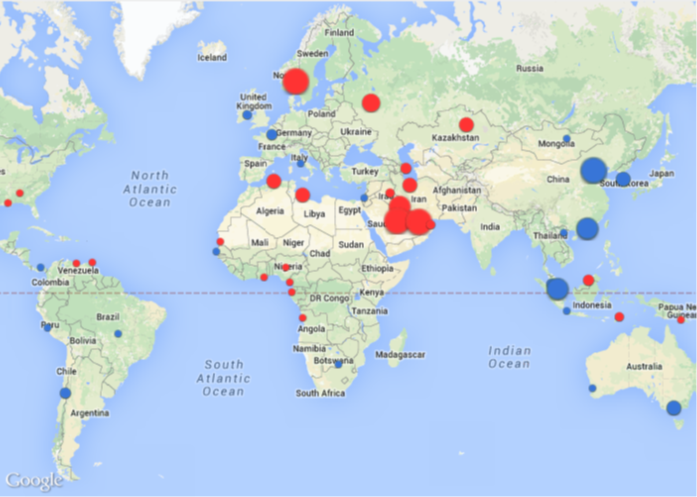 This division of labor is consistent with Tinbergen rule in policy design: to reach n targets, one may use n independent instruments. International reserves are useful in dealing with balance sheet exposure, aiming at short and intermediate run stabilization objectives. Yet, hoarding international reserves is not a panacea, as the opportunity cost of reserves imposes a fiscal cost, and hoarding reserves may require sterilization to mitigate their inflationary consequence. Thereby, an inflation targeting regime may relegate the goal of real exchange rate stabilization to its sovereign wealth fund, as part of a fiscal rule aiming at achieving counter-cyclical policy stance. Such a fund may have greater risk tolerance, and its accumulation or decumulation impacts directly the fiscal stance and the real exchange rate.
The gains of combining IT with a fiscal counter-cyclical rule may apply to most countries with functioning institutions, beyond commodity countries managing SWF. The logic of linking country’s buffer funds [international reserves, SWF, public debt] with the fiscal budget can be applied to any country, once we recognize that the market value of sovereign debt is akin to Sovereign Liability Fund – a negative SWF. Similarly, stabilizing the economy in the presence of volatile CTOT and other shocks, aiming at country-cyclical policy is a worthy goal for all countries. While properly managed IT deals with inflation and price stability, generically IT and Taylor rules do not suffice to stabilize both output and inflation. The logic of Tinbergen’s rules of policy design imply that at times of large and persistent shocks, IT rules should be complemented with fiscal rules, as has been clearly illustrated by Chile and several other countries.

The presentation is here.