The dollar has exhibited substantial strength in the past few months, both against the euro, and against a basket of currencies, as noted in the press (e.g., [1] [2]) While this assessment is correct, it’s useful to keep the dollar’s movement in perspective. 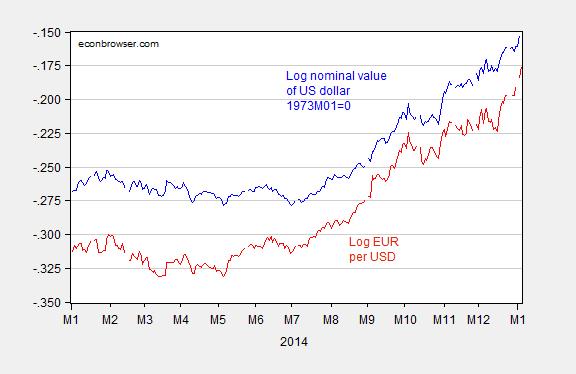 Figure 1: Log value of US dollar on trade weighted basis against other major currencies, 1973M01=0 (blue), and log EUR/USD exchange rate (red). Up denotes a strengthening of the dollar. Changes are interpretable as percentage change, i.e., a change from -0.04 to -0.00 represents a 4% appreciation. Source: Federal Reserve Board via FRED, Pacific Exchange Services, and author’s calculations.

The appreciation since July looks substantial on a broad basis — 7.8% in log terms, bringing the value back to where it was in the wake of the Lehman collapse. Figure 2 provides a longer view. 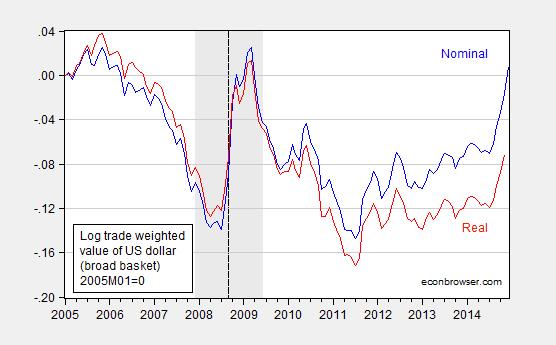 Figure 2: Log nominal value of US dollar on trade weighted basis against broad basket of currencies, 2005M01=0 (blue), and real (CPI deflated) value (red). Up denotes a strengthening of the dollar. Changes are interpretable as percentage change, i.e., a change from -0.25 to -0.20 represents a 5% appreciation. Vertical dashed line at Lehman. NBER defined recession dates shaded gray. Source: Federal Reserve Board via FRED, NBER, and author’s calculations.

In real (CPI deflated) terms, the appreciation is less pronounced; as of November, it’s some 8.4% lower than it was in March 2009. If nominal matches real in December, then it’ll be about 6% lower.

Furthermore, as discussed in previous posts, it’s not clear that CPI deflated measures of the real exchange rate are the most useful for measuring international competitiveness. A more useful concept would be the labor productivity adjusted measure, namely the unit labor cost (ULC) deflated real rate. I plot both series in Figure 3, over a long time span. 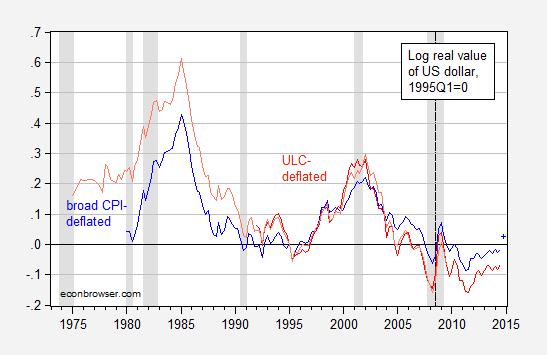 Here we encounter a trade-off between theoretical advantage and empirical availability. Conceptually, the ULC deflated series is more appropriate for assessing competitiveness, but the calculated series only encompasses industrial countries for which productivity data are readily available (hence omitting China).

Regardless, Figure 3 demonstrates that we are some way away from a deterioration in competitiveness rivaling that of the early 2000’s, let alone the mid-1980’s, using either the CPI or ULC deflated measures (although there will be some reduction in output relative to counterfactual, as discussed in this post). Working the other direction, it might be that US imports are more substitutable with home production, and US exports with foreign production, than in decades past. I suspect that’s the case, but I don’t know of any specific empirical work that validates that view.

Even though the dollar’s value does not yet rival previous peaks, if US output should grow substantially faster than that in the Eurozone and Japan, then expect continued appreciation (see discussion of Taylor rules, output gaps, and exchange rates in this post).

My own personal worries revolve around emerging markets. As noted (e.g., [3]), and appreciating dollar implies a deterioration in emerging market firm balance sheets when there are large amounts of dollar debt. Fixed or semi-fixed exchange rates will mitigate this effect if sustainable; otherwise, pernicious feedback loops are going to be established.

I particularly worry about the dollar appreciation in conjunction with increasing yields in the US. Rising US yields would likely pull financial capital from emerging markets, with particularly negative effects on growth, as shown in Chart 15.4 (from a forthcoming international economics textbook by myself and Doug Irwin). 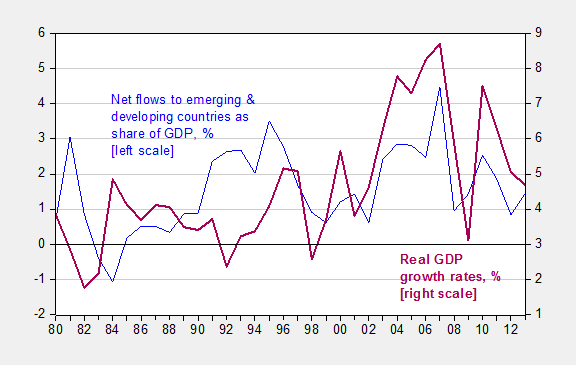 16 thoughts on “The Dollar’s Recent Rise in Perspective”