As widely expected, at Wednesday’s FOMC meeting the Federal Reserve dropped its statement that “the Committee judges that it can be patient in beginning to normalize the stance of monetary policy”, the magic formula that many observers had thought would open the way for a hike in interest rates at the Fed’s June meeting. But the yield on a 10-year U.S. Treasury bond dropped 10 basis points immediately following the FOMC release.

More important than leaving the word “patient” out of the latest FOMC statement was a significant downward revision in the interest rate that the Fed itself seems to be anticipating. The median FOMC member now anticipates a fed funds rate over the next few years that is 50 basis points lower than was anticipated last December. 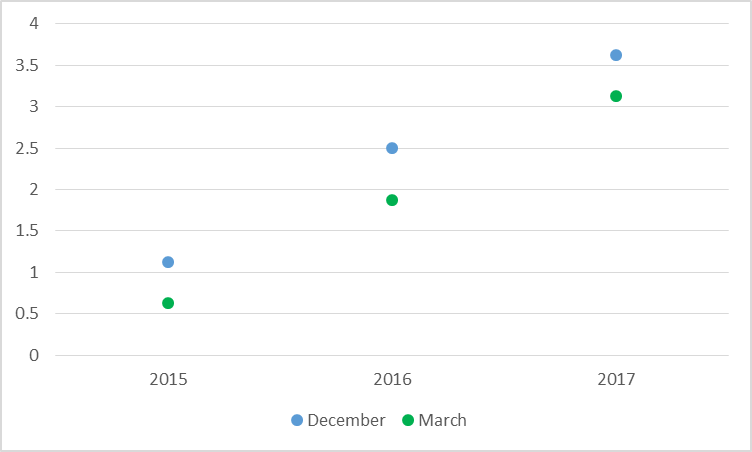 Anticipated target for fed funds rate for end of indicated calendar year of the median FOMC participant as of December 17, 2015 (in blue) and March 18, 2015 (in green).

Notwithstanding, the fed funds futures market is pricing in significantly lower expectations yet. 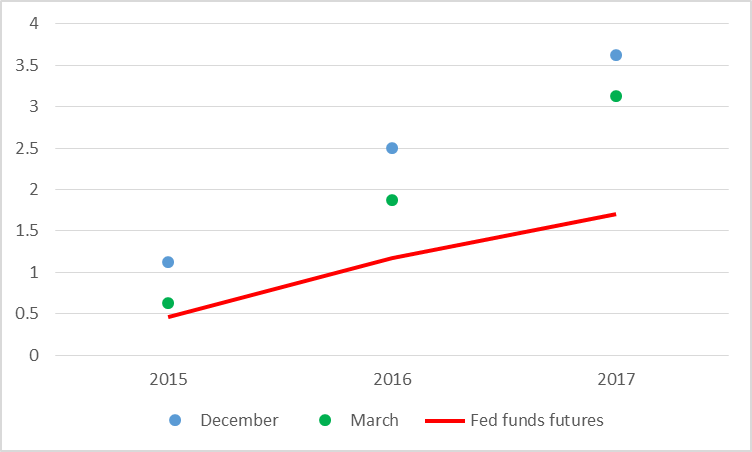 It’s also worth noting that the median FOMC “longer run” interest rate prediction came out at 3.75% from both the December and the March meetings, though the distribution of the individual “dots” from the latter has clearly drifted down. With a long-run inflation objective of 2%, that implies an equilibrium real interest rate of 1.5-1.75%. Compare that to the yield on a 10-year Treasury inflation-protected security that is now below 20 basis points. 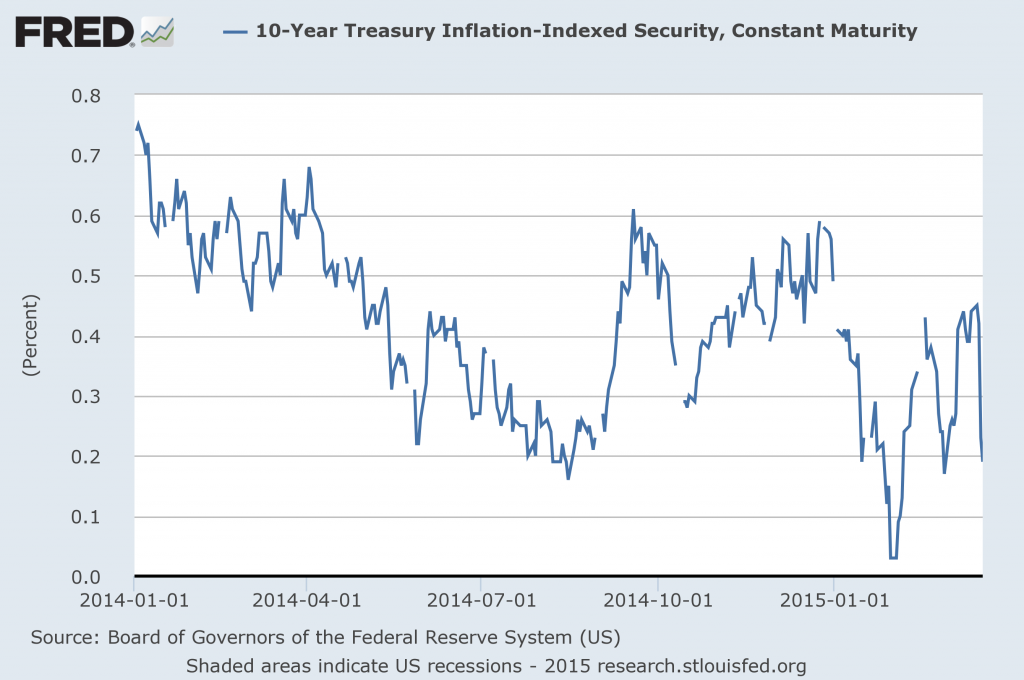 All of which raises the question: does the Fed know something the market doesn’t, or vice versa? Tim Duy concludes “it is now clear the bond market is not moving toward the Fed; the Fed is moving toward the bond market.” But my answer to the question is: a little of both. Based on the historical evidence reviewed here I think it’s reasonable to expect an equilibrium real rate significantly above 0.2% and significantly below 1.5%. But given my own (and everyone else’s) uncertainty about exactly where the number is within that range, it makes sense for the Fed to wait a little longer before raising rates.

And as Menzie pointed out last week, international developments are leaving the Fed little choice. One important channel by which monetary policy can influence the Fed’s targets for output and inflation is through the exchange rate. A higher interest rate in the U.S. than in other countries means a stronger dollar. That makes it harder for the U.S. to export goods and makes imports more attractive, both of which mean a drag on U.S. GDP. And insofar as a stronger dollar means a lower dollar price for internationally traded commodities, it also takes us farther below the Fed’s 2% inflation target. When other countries are lowering their interest rates, that by itself tends to bring down U.S. output and inflation, and mitigates any argument for raising U.S. interest rates.

Note that the dollar fell 2% against the euro within a few minutes of the FOMC release.

Exchange rate (in euros per dollar).

Bottom line: the Fed sent a dovish signal with its statement last week that to me has a lot to recommend it and seemed to have some of the desired effects.

24 thoughts on “Fed moves the markets”