Wages in right to work states are lower than those others. After controlling for various factors, the gap remains.

The Congressional Research Service summarizes the empirical literature in this 2012 report. A recent empirical analysis using micro data from the Current Population Survey is by Gould and Shierholz (2011). Figure 1 presents the wages differentials for right to work states, based on a simple comparison, a model with no controls, a basic model, and a model with full set of controls. 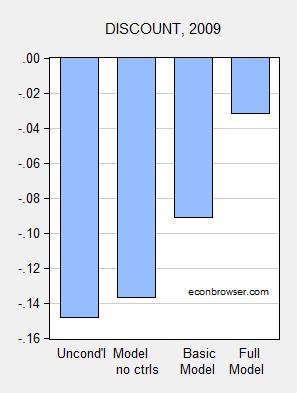 Obviously, controlling composition and individual effects changes the gap. In the end, the existence of right to work laws is associated with a 3.2% lower wage rate. This applies to all workers (union and non-union). If one focuses on certain groups, those gaps are more pronounced. 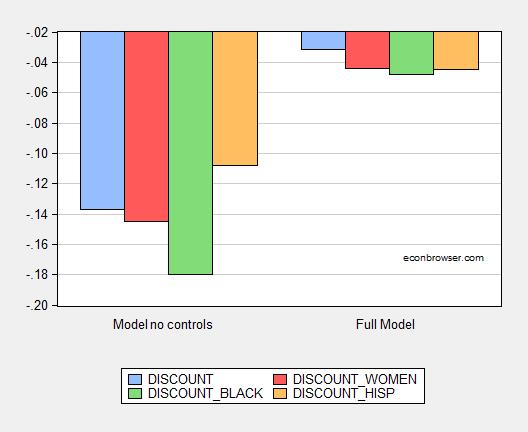 Now, the first thing one teaches beginning econometric students is (to quote Edward Tufte) “Correlation is not causation, but it sure is a hint” In particular, one could think that states with lower wages might implement right to work laws in the belief that that would produce higher wages. That suggests an instrumental variables approach. In this post, I found that the presence of right to work laws were associated with anti-miscegenation laws in effect in 1947. This in turn suggests that an ideal instrumental variable (IV) would be the presence of anti-miscegenation laws.

I find that raw differential in wages at the aggregate state level are 15.7% lower (log terms) in right to work states, as found in a cross section regression of log wage on a right to work dummy. Adding in a continuous variable for manufacturing share of GSP in 2014 makes the gap -13.7% (statistically significant at 1% MSL, using heteroskedastic robust standard errors).

Now, let’s allow for endogeneity of right to work laws. Using anti-miscegenation laws in 1947 to instrument, one finds that the gap is now -21.4% (it increases in absolute value!), and remains significant at the 1% MSL, despite the fact that the standard errors increase.

Obviously, this is not anything near a comprehensive treatment. However, it is interesting that a first cut accounting for endogeneity does not eliminate the gap.

Update, 3/7 12:30PM Pacific: Michael Wasser points me out to a 2009 paper by Lonnie Stevans which account for endogeneity in a more comprehensive manner.

72 thoughts on “Some Empirics Regarding Right to Work Laws”