The EIA released a new drilling productivity report last week, allowing us to update our graph of the drilling rig count in the four major tight oil regions. Active rigs in those areas are now 32% below their peak last October, the lowest level in 3 years. 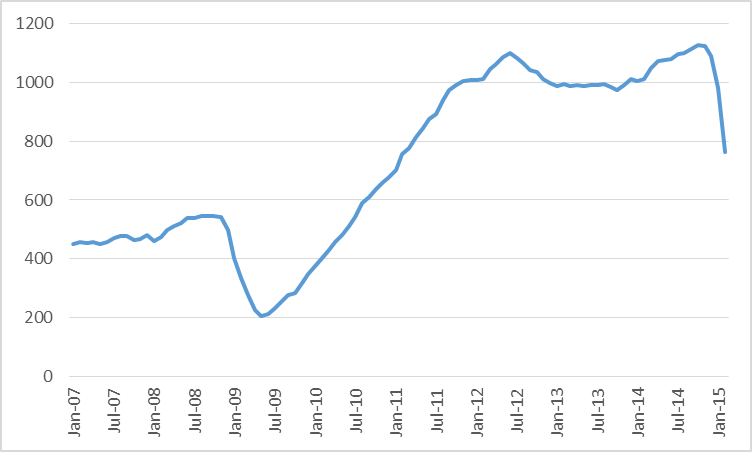 The DPR’s forecasting model nevertheless predicts that production from these four regions will be half a million barrels/day higher this month than it was in October, and will only begin to decline starting next month.

But folks over at the Peak Oil Barrel note that while the DPR is estimating for example that Bakken production rose 27,000 b/d between December and January, the North Dakota Department of Mineral Services reported last week that Bakken monthly production was down over a million barrels in January, or about a 35,000 b/d drop from December.

In any case, U.S. crude oil inventories continued to increase last week, signaling that so far supply continues to outstrip demand. And the Wall Street Journal reports a strategy followed by some companies that could enable them to bring production back up quickly if prices recover:

Now many are adopting a new strategy that will allow them to pump even more crude as soon as oil prices begin to rise. They are drilling wells but holding off on hydraulic fracturing, or forcing in water and chemicals to free oil from shale formations. The delay in the start of fracking lets companies store oil in the ground in a way that enables them to tap it unusually quickly if they wish– and flood the market again.

The backlog of wells waiting to be fracked– some are calling it fracklog— adds to the record above-ground inventories to restrain any significant price resurgence. Eventually, however, the economic fundamentals have to prevail, and we will settle down to a price around the true long-run marginal cost.