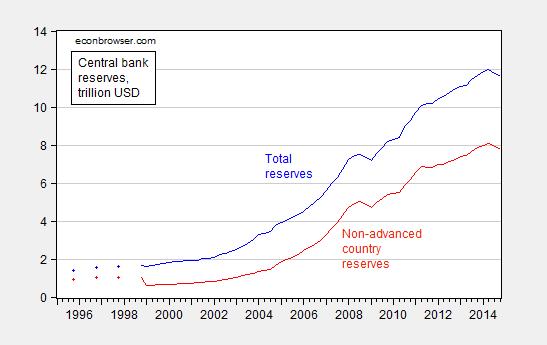 Note the drop in non-advanced country reserves in the last two quarters. The only drop of a comparable magnitude occurred during the aftermath of the global financial crisis. The rapid appreciation of the dollar makes the interpretation of dollar-valued reserves a bit more complicated than usual. In SDR terms, reserves have essentially plateaued. 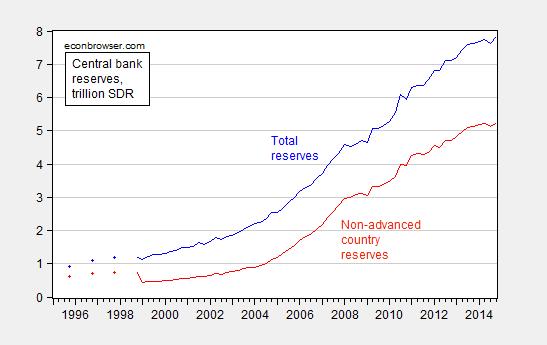 This is interesting because this represents a continuation of the phenomenon outlined in Section 4 of Bussiere, Chen, Chinn and Lisack (2014). We conjecture:

In work currently underway, we are examining these hypotheses.

The deceleration is widespread, suggesting in part a common factor, but there is also some variation, indicating some idiosyncratic effects. Chinese accumulation has dropped in dollar terms from $28.4 billion/month over the 2009-2012 period, to $1.8 billion/month in 2014. Russian accumulation, from $1.3 billion/month to -$10.7 billion/month. Table 1 presents some statistics. 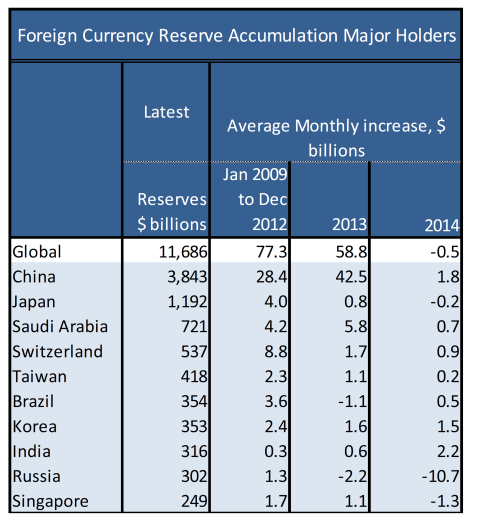 One question raised by a declining pace of reserve accumulation is whether bond prices will tend to rise faster (e.g., [1]). Kitchen and Chinn show that Treasury yields depend on foreign official sector purchases of dollar assets. 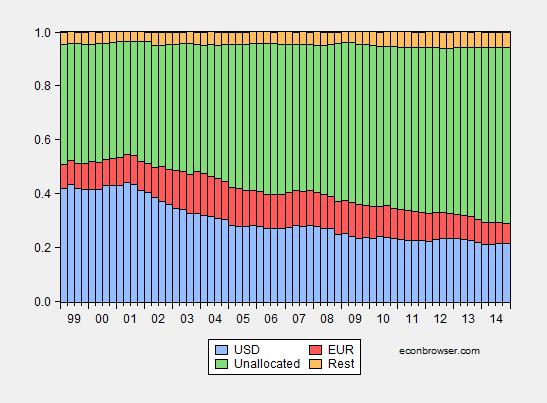 Unfortunately, as shown, there is a large degree of uncertainty regarding the amount of dollar assets vs. others. Benn Steil at the CFR, in assessing Chinese reserve accumulation, concludes that China is not selling off reserves, after stripping out valuation effects, and assuming that 65% of reserves are in US dollars. Since China accounts for a third of world reserves, and three-quarters of reserve accumulation over the last two years, it would seem that lots of upward pressure on Treasury yields from this quarter is unlikely.