Not only was overall employment growth preliminarily estimated to be low; earlier months’ estimates were also revised down. 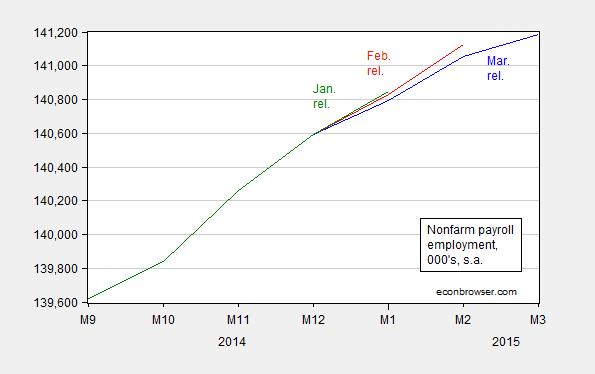 One should never put too much weight on one month’s preliminary figures. It’s important to keep in mind that the mean absolute error of the m/m changes going from 1st release to 3rd release is 45,000. [1] Still, lackluster employment growth in this month reinforces my view that we should not be overly concerned about an overheated labor market. In my view, we are still some way from full employment.

To me, the more interesting aspect of the release involves the sectoral breakdown. Some have pointed out the drop in leisure and hospitality employment, which seems unlikely in their view to be sustained. For me, the more worrying aspect is the decline in manufacturing employment over time. In 2015M03, the change is -1 thousand (so doesn’t show up in Figure 2 below). 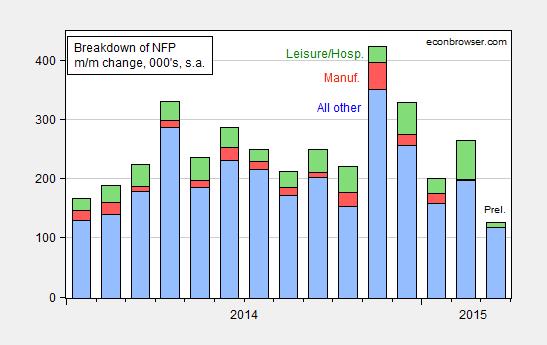 Update, 4/4 2:45PM Pacific: Here is a graph of growth rates in the dollar, and indicators for manufacturing. 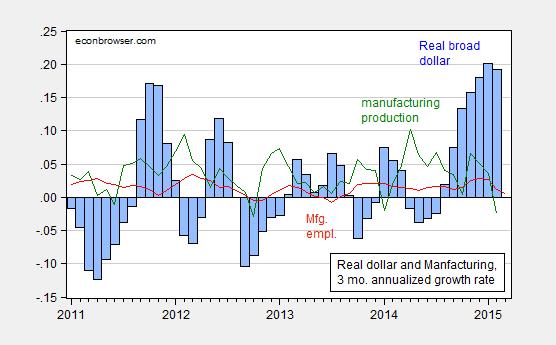 For other views on the dollar, see Riccadonna, Wright and Yamarone/BloombergBusiness.

13 thoughts on “March Employment: Downward Revisions and Some Sectoral Breakdowns”