Poverty, estimated using the official criteria and poverty threshold, or including taxes and non-cash benefits, rises in Wisconsin (while the officially reported Census measure declines in the US). [minor edits to clarify MDC 4/23]

The invaluable Wisconsin Poverty Report, coauthored by my La Follette colleague Tim Smeeding, Julia Isaacs (Urban Institute & IRP) and Katherine A. Thornton (IRP) under the auspices of the Institute for Research on Poverty, has just been released.

The key methodological innovation in the “Wisconsin Poverty Measure” is to calculate a taxes and non-cash benefits inclusive measure of poverty. Time series for the market income, official, and augmented measures are displayed in Figure 1. 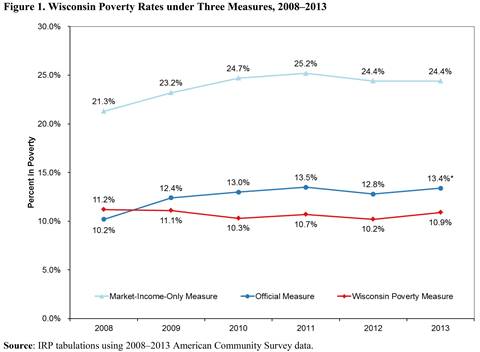 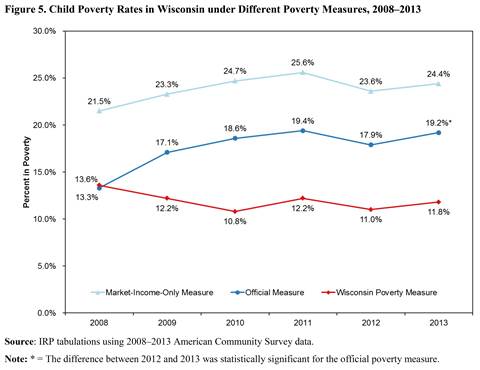 Finally, I find it of interest that there are Econbrowser readers who constantly decry the trend in supplemental nutritional assistance program expenditures. 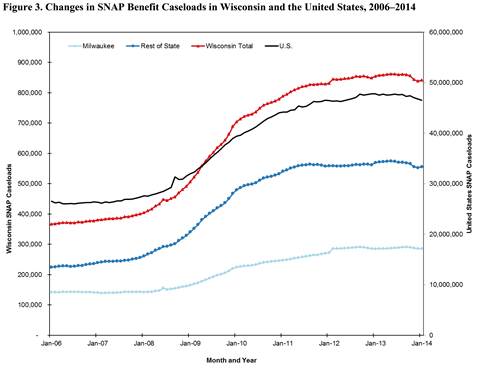 Expenditures are being reduced, but in part because of termination of extended funding for SNAP. If Figures 1 and 5 convey any message, it is that there remains a need for SNAP (well, only if one cares about poverty).

Children got some boost from the recovering economy in 2012, but that boost appears to have dissipated in 2013.While families with children continued to benefit from some of the program expansions under the American Recovery and Reinvestment Act of 2009 (ARRA), it was not enough to protect them against the rising market-income poverty of their parents in 2013.

In contrast, at the start of the recession, the WPM shows different trends from those shown by the two cash-based measures. Between 2009 and 2010, earnings fell sharply, but SNAP benefits rose as more families qualified for assistance and as both SNAP and the federal EITC and other refundable tax benefits were expanded under the ARRA. (Because the state EITC is tied to a percentage of the federal EITC, the state EITC also increased; however, the growth in the state EITC was offset by state action to reduce the state EITC, effective in tax year 2011 and continuing.) As these programs expanded, child poverty as measured under the WPM actually declined, despite the worsening economy and increase in market-income poverty (see Figure 5). Child poverty in 2010 was still higher than poverty for other age groups, but it was low relative to other years.

Update: Reader Patrick R. Sullivan expresses disbelief that the Wisconsin Poverty Measure (WPM for short) falls in 2010. If he would read the report, he would find (page 6):

While the official poverty measure considers nothing beyond pre-tax cash income as resources, the WPM incorporates a more comprehensive range of resources, including tax credits and noncash benefits such as SNAP and housing subsidies, and it adjusts for household needs, such as out-of-pocket medical costs and work-related expenses that include child care and transportation costs. Consistent with our goal of measuring poverty in Wisconsin, we include Wisconsin-specific public resources, such as the Wisconsin Homestead Tax Credit and the Wisconsin state Earned Income Tax Credit (EITC), in addition to the federal EITC.

As noted in my quote regarding child poverty rates (and Figure 3), part of the reason for the mitigation of poverty was the American Recovery and Reinvestment Act which increased these benefits. Figure 7 highlights this point: 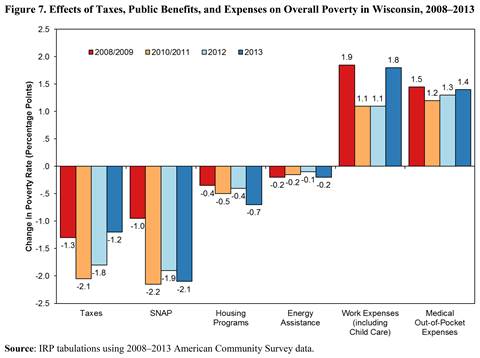 As the report warns, we will see (in next year’s report) what happens now that SNAP benefits have been cut.

60 thoughts on “Trends in Poverty in Wisconsin”