Not within the next couple of years, according the Walker Administration’s Wisconsin Economic Outlook, released today.

Figure 1 depicts the latest data on private employment, along with the Economic Outlook forecast and the path implied by Governor Walker’s promise to create 250,000 new private sector jobs by the end of his first term (black line). Note that data through 2014M09 reflects incorporation of Quarterly Census of Employment and Wages data, which the Walker Administration used to tout as the most accurate depiction of the labor market. Data thereafter reflect survey data, based upon levels reported in the QCEW data through 2014M09. 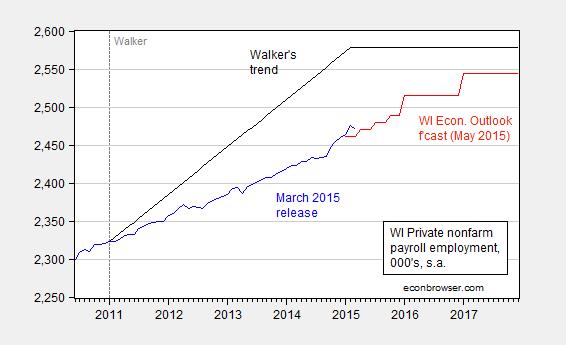 Since the forecast horizon only extends through 2017, one cannot infer when the Administration believes the +250K target will be achieved.

In order to gain some additional insight on this question, I have estimated an ARIMA(1,1,2) on log private nonfarm employment over the available sample pertaining to Governor Walker (2011M01-2015M03). Such a specification accounts for 33 percent of the variation in the first log difference of monthly employment. Using this equation, I forecasted out employment. The forecast, and the accompanying ± 2 standard error band is shown in Figure 2. 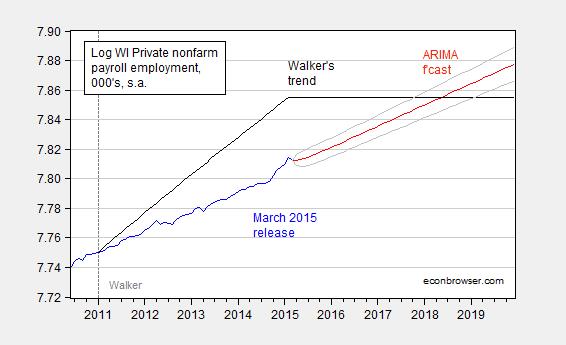 The forecast, which is slightly more optimistic than the Wisconsin Economic Outlook‘s, indicates that the +250K target will be achieved by 2018M06. Of course, given model uncertainty, the date could be as early as 2017M10, or as late as 2019M02.

An additional caution: I have used the data up to 2015M03 to estimate the ARIMA; as I noted previously, the QCEW data used in the January benchmark revisions drove a big downward revision in the survey-based data up to 2014M09. Should the same occur in next January’s benchmark revision, then holding all else constant, the forecasts I have plotted in Figure 2 will be overly optimistic.

More on Wisconsin’s lagging performance relative to the Nation, here and here.

Since tax revenues have failed to surge as the Republicans had hoped, it is likely further spending cuts will be implemented. As I have observed in the past, spending cuts are likely to be contractionary in the short run, making it even less likely that employment will continue to grow rapidly. On the budget situation, Marley and Stein of the Milwaukee Journal Sentinel write:

Only one year ago, the state was looking at a $1 billion budget surplus. Republicans used that surplus to add to a series of property and income tax cuts that they have passed since 2011 and are now considering the cuts to state programs to keep the budget balanced.

Overall, the state is left where budget watchers had long expected: in a challenging spot that is worse than the 2013-’15 budget but not as bad as Walker’s first budget in 2011. The difference is that Wisconsin now is having to cut key parts of the state budget amid a slow economic expansion, rather than four years ago when the state was doing so as it came out of a deep recession.

9 thoughts on “When Will the Governor’s Promise of 250,000 New Private Sector Jobs Be Achieved?”