In Down, Down, Down, I noted Wisconsin’s three month downward trend in nonfarm payroll and private nonfarm payroll employment, and as I cautioned, even this level of employment would likely be further downward revised when the QCEW data were incorporated in the next benchmark. The household survey based data released by the BLS adds yet more confirmation of a decrease in employment (h/t GeoffT). Monday’s newly released Philadelphia Fed coincident indices reflect those labor market trends.

In Figure 1, I present both the civilian employment and the NFP series for Wisconsin. 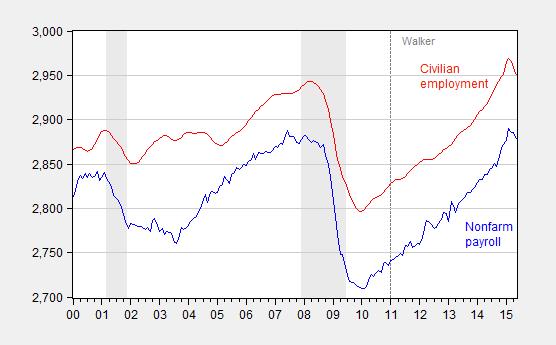 Notice that both series are declining. Since the civilian employment series is derived from a different survey than the NFP, this adds confirmation to the view that the labor market is not improving, and could very well be deteriorating. However, it is important to recall that the household series at the state level is subject to high imprecision [1] (which is why I do not typically focus on these data).

The last time such a large 3 month drop in the Wisconsin civilian employment rate was recorded — aside from the last recession — was in 1982, at the end of the 1980-82 recession.

By the way, such a marked drop in the civilian employment series is not apparent in Wisconsin’s neighbors, with the exception of Illinois. In that case, the percent drop is about half of that experienced in Wisconsin. 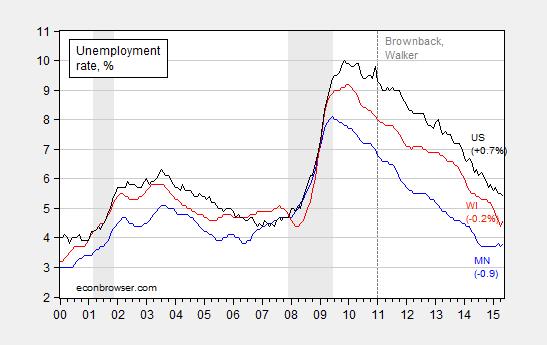 Figure 2: Unemployment rate for Minnesota (blue), Wisconsin (red)< and US (black). Figures are for change in % relative to Nationwide trough at 2007M12. Source: BLS, and author's calculations. 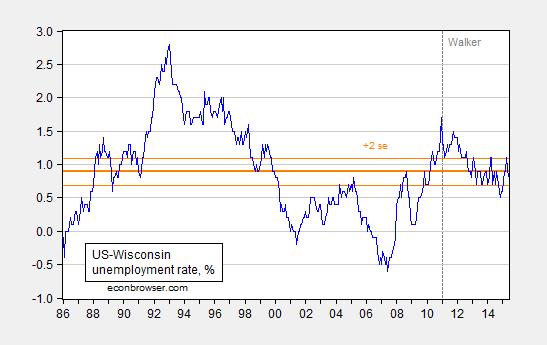 To the extent that the US-WI differential has declined since 2011M01, this means that the US unemployment rate has come down more rapidly than that in Wisconsin, and in fact the differential was significantly statistically different than zero in favor of the US over the last half of 2014. Currently, the US-Wisconsin differential is at the average level.

Finally, since labor market data are used in the construction of the Philadelphia Fed’s coincident indices, it’s unsurprising that Wisconsin has now joined the ranks of states with declining economic activity. In fact, it’s one of only 15 states that registered a negative m/m change. 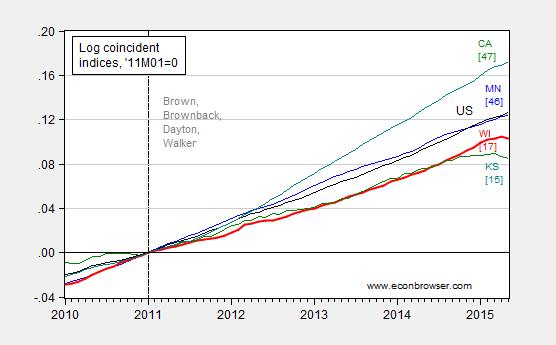 None of Wisconsin’s neighbors share this distinction of m/m decline. Notice the downward movement adds to a downward revision in the March and April index values. 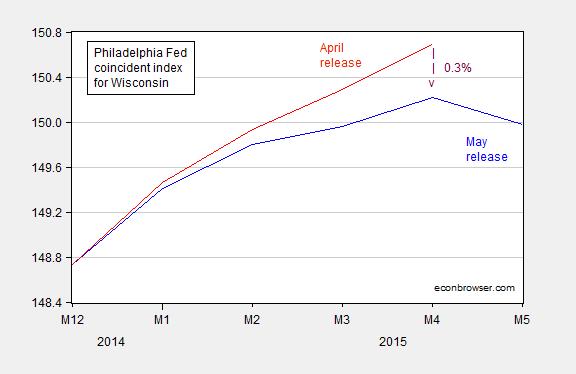 All the most recent data are subject to revision, so it is too early to conclude that Wisconsin is in a sustained downturn. However, the indicators are at consistent with at least a pronounced slowdown.

Uncertainty regarding the state budget [2] [3], particularly with respect to highway funding, [4] is unlikely to help foster growth. The resolution of uncertainty with respect to taxes, spending and borrowing will come, perhaps not by June 30th (the deadline for passing a new budget), but eventually. However, to the extent that a regime of reducing spending (including on the UW system) to match regressive tax cuts is further tightened, it is hard to see how growth accelerates on the basis of state-specific factors.