From an article in the La Follette Policy Review:

In 2010 as the Great Recession was releasing its grip on the world’s economy, the United Kingdom’s newly elected Conservative-Liberal government embarked upon a policy of fiscal consolidation—higher taxes and drastically reduced spending—with the aim of stabilizing the ratio of government debt to gross domestic product (GDP) while spurring economic growth….

… Reducing the size of government and reducing government borrowing would free up resources to spark a strong recovery driven by the private sector. In the United States, the Obama Administration maintained elevated spending through 2011 to stimulate overall demand. In contrast to the predictions of Prime Minister Cameron’s government, and contrary to the views of opponents of President Obama’s economic program, American income per capita continued a steady, albeit slow, recovery while per- capita income in the United Kingdom languished; indeed, the country fell into another recession.

The tale of two economies — and two fiscal policies — can be illustrated by reference to Figure 1 in the article: 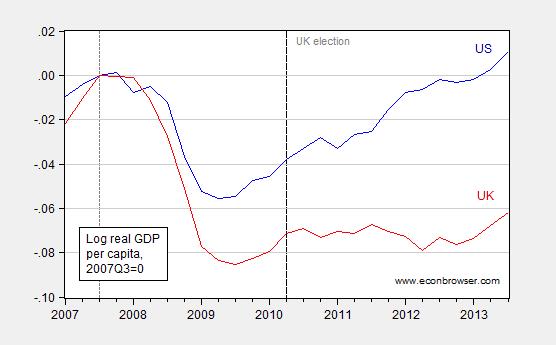 Figure 1: Log real per capita GDP in US (blue) and in the UK (red), 2007Q3=0. Source: US BEA and UK Office of National Statistics, and author’s calculations.

For those who wonder what a broader cross-country comparison of growth rates and a measure of stimulus — namely the cyclically adjusted budget balances — reveals, one need look no further than Figure 2. 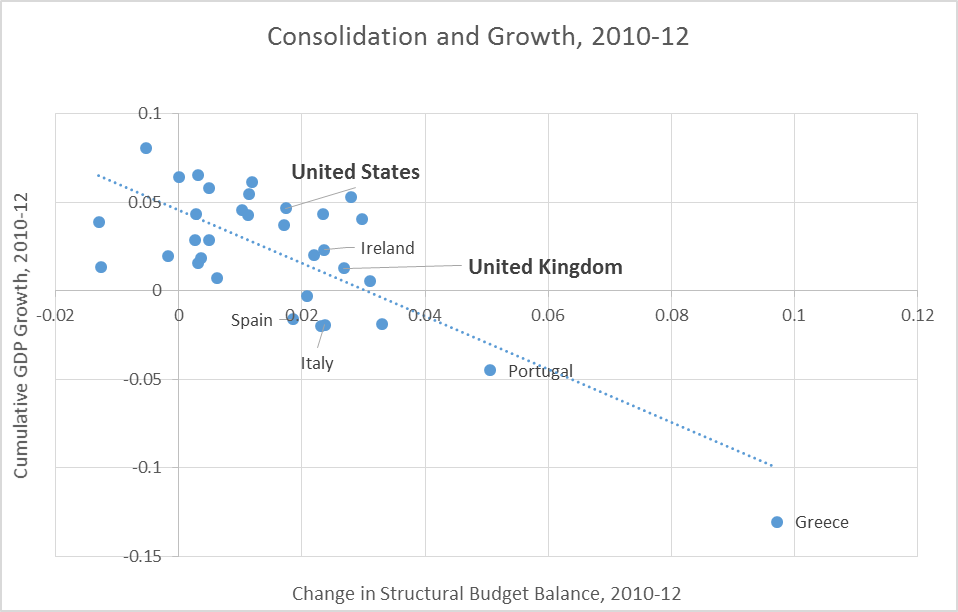 The relationship is statistically significant, and negative. That is, countries that embarked upon fiscal consolidation in the 2010-12 period experienced slower growth. The regression coefficient is -1.10 (with a t-stat over 5.7 using White robust standard errors). That is, for each one percentage point increase in the structural budget balance (as a share of potential GDP), real GDP growth is lower by 1.1 percentage point. That finding remains intact if Greece is omitted.

The aforementioned negative correlation applies to the consolidation period; if one examines the longer 2009-13 period of recession and recovery, one finds that the the slope coefficient rises in absolute value) to -1.43. If one then uses the change in the primary structural budget balance (i.e., the structural budget balance omitting interest payments), then the slope coefficient rises (in absolute value) to -1.52, again significant. Some people have argued that the euro zone countries should be excluded, as they are not independent observations. It seems a little extreme to me to drop them all, but even if one does (and omits the city-states of Singapore and Hong Kong), one still obtains a negative coefficient of -0.85, statistically significant with a p-value of 0.002. The adjusted R2 is 0.33 (higher than the adjusted R2 for the full sample, at 0.22!)

All these developments have served to disrupt a seeming consensus on the limited efficacy of fiscal policy that prevailed before the Great Recession. From the article:

In the 1990s and first decade of the next century, a synthesis of the Keynesian and Real Business Cycle models— – dubbed the New Keynesian approach— – came to the fore. New Keynesians models varied but carried the common characteristics of sticky (or unresponsive in the short run) wages and prices. On the eve of the Great Recession of 2008-2009, the New Keynesian perspective dominated macroeconomic policy analysis. These models suggested that monetary policy would have little to moderate impact on output and, in fact, argued that constraining monetary policy to some set of well-defined rules, hence, eliminating discretion, would yield the best outcome. The implications of New Keynesian models for fiscal policy were largely unexamined, mostly because conventional wisdom already held that changes in spending and taxes (which require Congressional action) would be too difficult to accomplish in time to stabilize the economy.


So, on the eve of the Great Recession, it seems that mainstream macroeconomics had come to a comfortable spot; the basic model was again agreed upon, and the disputes revolved around parameter values. Nonetheless, even the models with estimated impact at the higher end implied modest effects of monetary and fiscal policy.


Then, vociferous debate in the United States over the 2009 stimulus package dispelled the illusion of consensus.

Why Was the Consensus Wrong?

The view that the impact of government spending was relatively small was common to analysts with both the Keynesian and New Keynesian perspectives. One reason that view proved wrong was that experts predicated it on “normal times”. But the times were hardly normal, for at least three reasons:

Each of these points is discussed in greater detail in the Fiscal Multipliers entry in the New Palgrave Dictionary of Economics (post here).

The intellectual landscape half a decade after the Great Recession is quite different than it was a decade ago. Mainstream macroeconomic thought took the stable growth-low inflation environment of the previous 20 years as the norm. It assumed that the financial system had evolved to be robust to asset booms and busts. These assumptions proved grossly wrong, and so the need to re-assess many of the conclusions that followed is unsurprising.

It is interesting to consider the form in which intellectual resistance to this re-assessment takes. The response does not usually address the correlation shown in Figure 2. Nor does the rebuttal typically address why the price and wage levels typically fell during the great recession, rather than rise, as would be implied in a real business cycle interpretation reliant upon a negative supply shock (see this post). Rather, there are appeals to the Treasury view — fiscal stimulus in that manifests in higher activity in one sector must crowd out an equal amount of activity in the private sector. This argument is typically couched in an axiomatic mode. A more mathematically sophisticated approach argues that wedge between the intertemporal marginal rate of substitution and the marginal productivity of labor — the “labor wedge” — is due to taxes, either implemented or anticipated (so the recession beginning in 2007 could be blamed on the incipient policies of the incoming Obama administration, which began in 2009). More on the insights of the business cycle accounting approach in a future post.

Update, 3/13 9AM Pacific: Reader Britmouse wonders about the elevated inflation in the UK as a counter to the aggregate demand argument. A cursory examination of the data shows that inflation fell during periods of declining GDP growth, as shown in Figure 3. 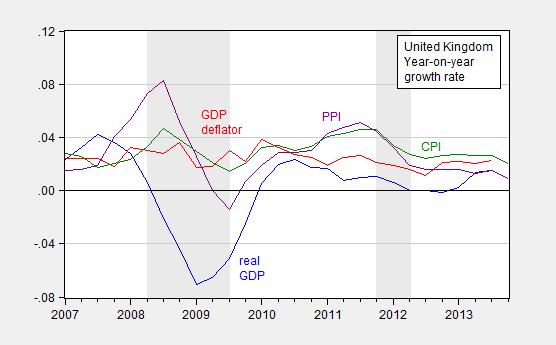 The covariation of price inflation with economic activity seems more consistent with standard demand side interpretations than a supply side one.