In my interview with NPR’s Jim Zarolli, the question came up about wage developments. Embarrassingly, I had no opinion, having not looked at the data (I know that doesn’t stop some people from opining; in any case, that question and lots of other stuff didn’t make it into the piece that aired). Well, I looked up the data, and surprisingly the level of real hourly earnings in May 2015 is the same as it was in January 2011(!).

Figure 1 shows the time series for average hourly earnings for all private workers, deflated by the headline CPI. If you think about it, it’s pretty amazing that the real wage is the same even given the dramatic drop in energy prices in recent months. 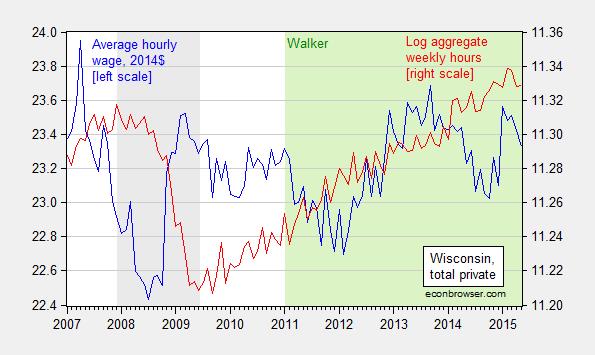 The other series displayed in Figure 1 is a measure of aggregate weekly hours. It’s hard to say given the volatility, but it certainly seems that aggregate hours are declining over the last three months. This is troubling given that data from the household survey validates the conclusion from the establishment survey that employment is declining in Wisconsin.

As an intellectual exercise, it is interesting to ask if Wisconsin can go into a downturn while the US does not. Year-on-year civilian employment growth in Wisconsin did go negative in 1985 and 1998 even while US growth did not (there’s also a short dip in 2004). Hence, it is conceivable that Wisconsin’s path could deviate from the US overall.

Update, 7/15 4:30pm Pacific: If you were wondering how average hourly earnings were evolving in the US, and in Wisconsin’s neighbor, Minnesota, here is the picture. 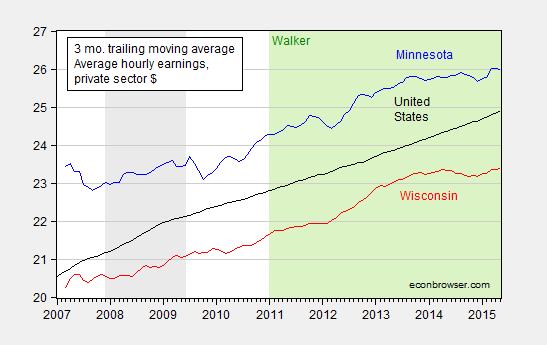 While earnings growth has slowed in Minnesota, in contrast to Wisconsin’s experience, employment and aggregate weekly hours continue to rise.

35 thoughts on “Wisconsin: Real Wages Are the Same as They Were in January 2011”