Thursday’s GDP release incorporated an annual data revision extending back to 2012. In this recovery, output is 4% lower (in log terms) than the corresponding point in the previous recovery. In Ch.2009$, 2015Q2 output was 92.9 billion lower (at quarterly rates). The comparison (in log levels, normalized to troughs) is shown in Figure 1. 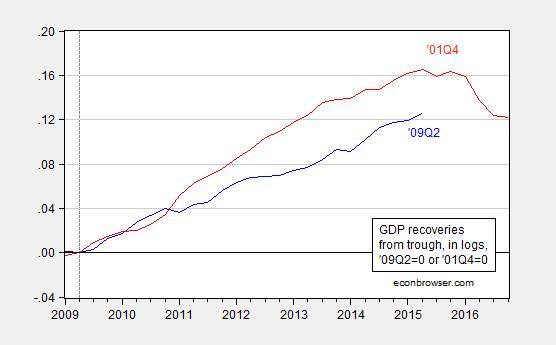 The gap falls to 2.9% when per capita GDP is compared. 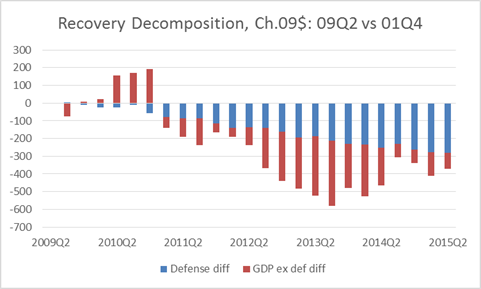 Figure 2: Contributions to differences in 2009Q2 and 2001Q4 recoveries, in billions of Ch.2009$, SAAR, from defense spending (blue) and all other government spending (red). Source: BEA, 2015Q2 advance release, and author’s calculations.

In other words, most of the slower growth in an accounting sense can be attributed to lower defense spending. Does this mean we should embark upon another war? After all, the same voices who argued for invading Iraq have also argued for taking military action against Iran (e.g.., John Bolton). I do believe doing so would add to aggregate demand. Figure 3 (from this post) shows how much we spent up to FY2012 in real terms.

Figure 3: Cumulative real direct costs, in constant (FY2010) dollars by fiscal year, in the Iraq theater of operations (“Operation Iraqi Freedom”). Does not include debt service costs. Source: Nominal figures from Amy Belasco, “The Cost of Iraq, Afghanistan, and Other Global War on Terror Operations Since 9/11,” RL33110, Congressional Research Service, March 29, 2011, Table 3. Data for FY2011 is for continuing resolution, for 2012 is Administration FY2012 request. Deflated by CPI-all. CPI for 2011 assumes September 2011 m/m inflation is the same as August 2011 m/m inflation. Assumes 2012 inflation is equal to August 2011 CBO forecast for CY2012 inflation.


Figure 3 incorporates only direct fiscal costs to the United States government, and excludes interest costs. See here for another tabulation.

However, believe it or not, there are other ways of boosting aggregate demand, even when restricting oneself to spending on goods and services – and that’s spending on directly productive assets, such as infrastructure. To make this point concrete, note that in dollar terms, overall government spending more than accounts for the GDP differential. GDP was 371.7 Ch.09$ billion (SAAR) lower than the corresponding point in the previous recovery. Government spending on goods and services was 559.4 Ch.09$ billion less. As noted in this post, a big program of spending on infrastructure would clearly benefit the economy both on the supply and demand side. And yet, there is no evidence of movement here, particularly given the refusal of certain elements to consider more tax funding for such measures.[2]

Update, 8/3 2:30PM Pacific: Here is an alternative visualization of the recoveries, with GDP ex.-defense in per capita terms. 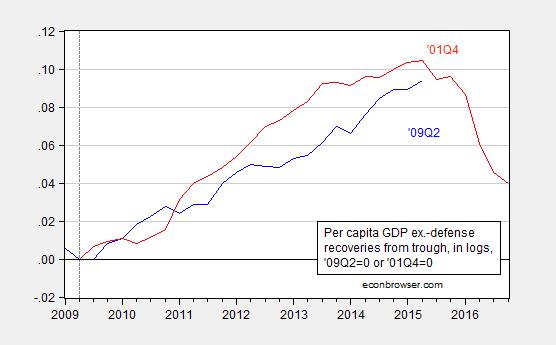 Figure 4: Per capita GDP ex.-defense relative to 2009Q2 trough (blue), relative to 2001Q4 trough (red), in Ch2009$, in logs. A reading of 0.4 can be interpreted as meaning per capita output excluding defense spending was 4% higher than it was at NBER defined trough. Source: BEA, 2015Q2 advance release, NBER, and author’s calculations.

40 thoughts on “Recovery without Military Keynesianism”