Mass deportation and elimination of Birthright Citizenship as policy options

I see the resurfacing of proposals to eliminate Birthright Citizenship and the forcible deportation of undocumented to solve the immigration problem. What are the implications of such proposals?

A 2014 Congressional Research Service report cites Department of Homeland Security estimates of 11.5 million undocumented residents as of January 2011. The American Action Forum, headed by CBO’s former head Doug Holtz-Eakin, has estimated the 20 year cost at between $419.6 to $619.4 billion. One time cost (so excluding the subsequent 20 year’s of expenditures) would range from $103.9 billion to $303.7 billion. This would be the one-time direct fiscal cost, amounting to 0.6% to 1.7% of 2014 GDP (2.6% to 7.7% of the 2014 CY Federal budget). The Center for American Progress’s estimate is $114 billion, not including recurring costs. 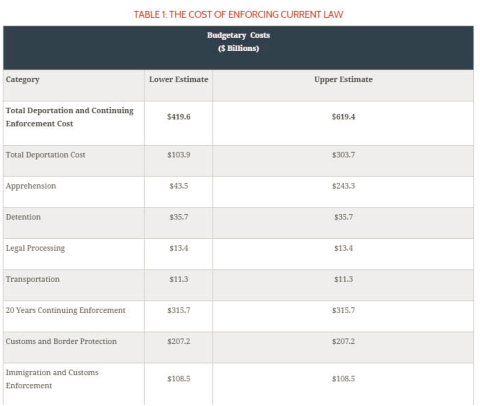 The AAF report continues to assess the long term (supply side) impact (it’s dynamic!). AAF estimates that in 20 years, GDP will be 5.7% lower than baseline given the 11 million reduction in labor force.

The most recent quantitative study on this issue I know of is this 2010 analysis written by Jennifer van Hook and Michael Fix for the Migration Policy Institute. The simulations indicate that passage of the Birthright Citizenship Act of 2009, which would have denied citizenship to any child born to parents who were both undocumented, would imply an increase of undocumented population from 10.8 million to 15.5 million by 2050. This is shown as the red line in the Figure 1 below. 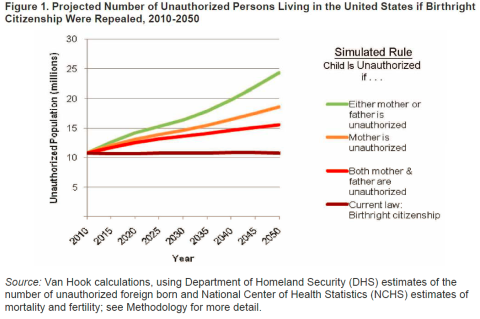 The simulations assume future behavior is the same as current (e.g., fertility, deaths), and the foreign born population remains constant at 10.8 million. Obviously, this assumes that illegal immigration continues. If the simulation assumes completely effective border control, so no new foreign born undocumented enter the country, then by 2050, the undocumented population would drop to 3.3 million. Hence, ending birthright citizenship is not in itself a “solution”, even with a completely cessation of illegal immigration – unless one is willing to wait a very long time.

Mass deportation would be costly. Ending birthright citizenship would not eliminate all undocumented even with zero illegal cross border migration (i.e., even with a “really terrific wall”).

85 thoughts on ““Solving” the Immigration Problem”