Thank goodness for Kansas, it makes even Wisconsin look good! 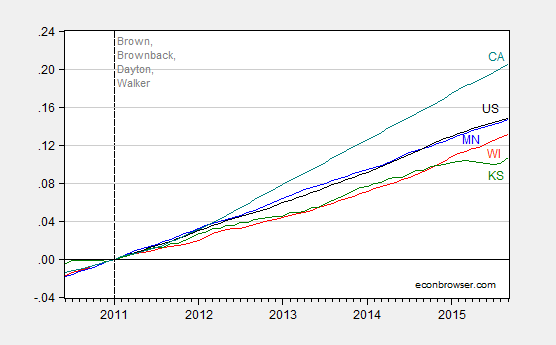 One criticism leveled against this graph, where I have normalized on a level at a certain date, is that it abstracts from trends. The question is what trend to use. I use the concept of cointegration to identify a trend, rather than using a time series model (either linear deterministic trend or a random walk with drift). Hence, I am constructing a counterfactual; disbelievers in such things should click elsewhere.

The logs of the coincident series for Wisconsin and the US do not reject the I(1) null at conventional levels. At the same time, they appear to be cointegrated according to standard test (Johansen, constant, no trend, 2 lags of first differences, at 5% msl).

Observation 2: The cointegrating relationship between Wisconsin output and US is about 0.70. 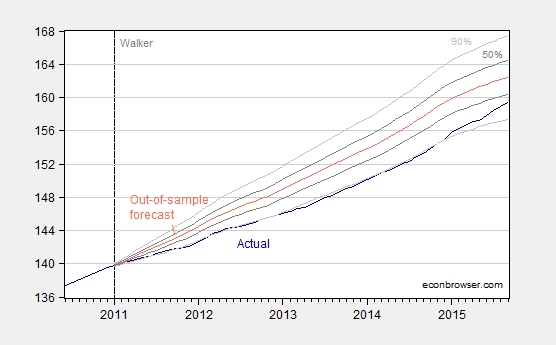 This outcome suggests that Wisconsin has been underperforming since 2011M01 relative to a counterfactual based on historical correlations in place over the 1990-2010 period. As of September 2015, actual activity is 1.9% (log terms) below what it should be.

Using GDP figures reported in the Wisconsin Department of Revenue’s May 2015 Economic Outlook, and assuming the coincident index shortfall is proportional to the real Gross State Product (GSP) shortfall, I calculate the cumulative loss since the beginning of 2011 is about 18.6 billion Ch.2009$, representing about 6.7% worth of 2015 forecasted GSP (according to Wisconsin’s Department of Revenue).

I would be somewhat wary of putting too much weight on the surge in activity registered in the last year which puts the actual within the 90% band. That’s because the last year’s worth of data do not incorporate directly the Quarterly Census of Employment and Wages (QCEW) data that the Walker Administration has touted as being very precise (at least, in the past; that refrain is seldom heard now). More discussion of this issue here.

See more on the Governor’s assertion that Wisconsin is moving in the right direction.