I don’t think it’s structural change associated with the recession.

In regard to my documentation that Wisconsin employment slowed significantly relative to counterfactual, reader Kirk writes:

…what you are doing is saying the difference in the change in coincident indexes between the US and Wisconsin remains the same in the future. You are right, it has not as your analysis clearly shows. I’m saying that it could be due to other factors than scott walker being elected, such as the US shift away from manufacturing, which was something that was in fact accelerated during the recession. ….

It’s possible a structural change happened during the recession. In fact your blog partner Jim Hamilton just wrote a peice about that idea regarding long term unemployment. Run your analysis out to 2009 or 2010 and see if the forecast starts to diverge immediately as well.

Great idea! I’d done it before for robustness tests, but here I’ll show it for completeness’s sake. To be explicit:

1. I estimate a single equation error correction model of Wisconsin and US nonfarm payroll (NFP) employment for the period 1990M02-2009M06 (the NBER defined trough).
2. Dynamically forecast out of sample using actually realized values of US NFP for the 2009M07-2015M11 period.

The ECM and methodology are laid out in this post; only the sample and forecasting periods differ. 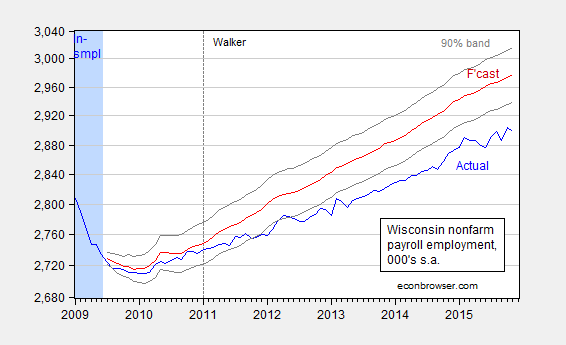 I will let readers decide. For me, the model tracks well for a year and a half, and then something happens in 2011M01, and it could be (contractionary) fiscal policy, or regulatory uncertainty. I don’t think structural factors all of the sudden hit that month.

27 thoughts on “What Happened in Wisconsin in January 2011?”