After 7 years of highly expansionary monetary policy, the Federal Reserve Bank is expected to pursue a new policy stance, which was signaled by its first increase in interest rates in last December. Side effects of this new policy are a reason of concern for policymakers worldwide, in particular in emerging markets with free movement of capital. In this column, we argue that also economies with managed or closed financial accounts may be affected. Focusing on the case of China, we show in a new research article (Cheung, Steinkamp and Westermann, 2016) that illicit capital flows, which at times are as large as the official ones, have been responding to the US monetary policy since the beginning of the 2007/8 global financial crisis. 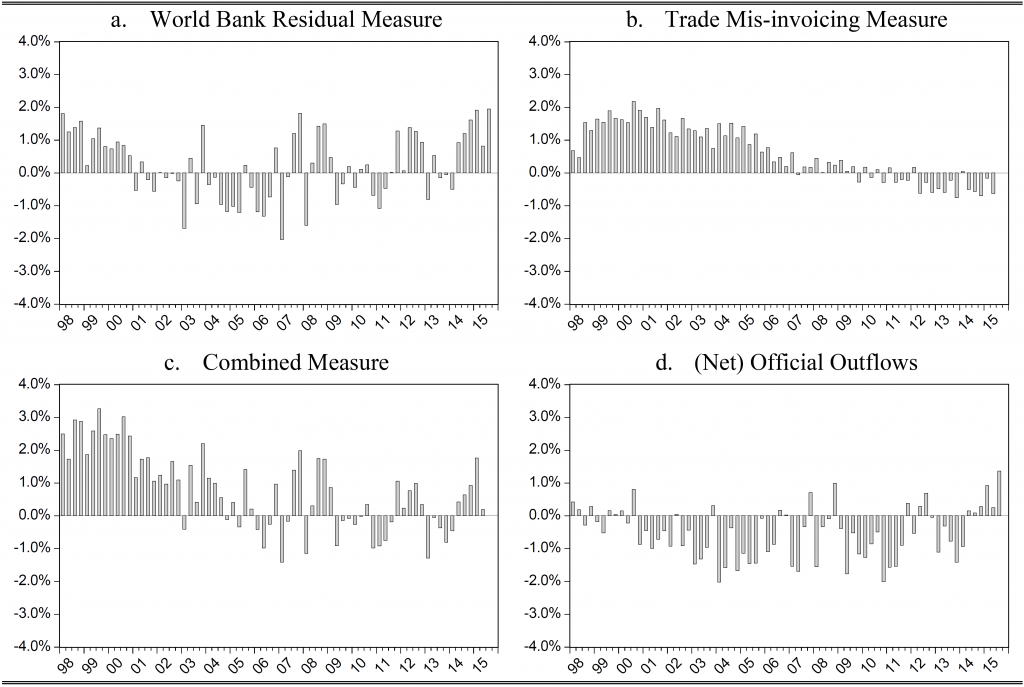 The starting point of our analysis is the creation of proxies for capital flight. While ultimately an unobservable variable, it has been approximated primarily by two measures in the literature: (i) The World Bank Residual Method, which compares the sources to the uses of funds in the balance of payments statistics and (ii) the measure of Trade Mis-invoicing. The latter is based on the idea that illicit flows can occur when bills of exports and imports are over (or under-) invoiced. For instance an export worth US$1000 may display only a value of US$500 on the bill, while another US$500 are placed into a US bank account. The independent recording of this shipment by two different agencies, the US and the Chinese statistical offices, helps us to uncover this type of capital flight. The graph above shows that the magnitude of capital flight is quite substantial. Although the dynamics differ for different measures of capital flight, they have in common that in net terms they are comparable to the official flows that are recording in the countries financial account.

In our research paper, we empirically analyze the determinants of these proxies for capital flight. Our main finding is that the standard explanatory variable, the deviations from covered interest rate parity – which follows from a standard portfolio balance model – has lost significance in the post 2007/8 period. Instead, we find three new factors that started to become empirically relevant around the same time. First the US money supply, relative to the money supply in China. The substantial expansion of the Fed’s balance sheet and other monetary aggregates help to explain the decline in capital flight out of China that is visible after 2007 in Figure 1.

The second factor is China’s gradual process of financial liberalization. This process is apparently taken as steps towards building up confidence by the markets, as it is also a factor that dampened capital flight over the past years. The increased realized volatility of financial markets, on the other hand, is a factor that appears to drive capital out of China. These factors are robust to a variety of control variables, including both China specific factors, such as political stability and risk measures, as well as other factors, such as the exchange rate regime.

Although outside of our sample period, the three factors – the US monetary policy, China’s financial liberalization, and market stability – identified in our study appear to be relevant also for China’s most recent capital flight/outflow experience after the summer 2015. Specifically, investors’ confidence about China’s commitment to financial liberalization and ability to stem market volatility has been eroded in light of the turmoil in the Chinese stock and the RMB markets and the policymaker’s erratic, if not clumsy, responses. These coupled with the US interest rate increase have been noted as reasons for significant capital flight from China.

A caveat must be made, however, when discussing the trade mis-invoicing measure of capital flight. While the Chinese authorities report the export data free on board, the US statistical offices report them including the transport and insurance costs. Thus a gap between the two is to be expected even in the absence of capital flight. In the literature – following the IMF’s example – this problem is typically approached by taking a constant 10% assumption on trade cost. While adopting this approach in the beginning of our paper, we do not consider it to be satisfactory, as trade cost can vary both across countries and over time. In one of our robustness test, we therefore use the time-varying and country specific trade-cost data of the CEPII Institute. Our main results, discussed above, were unaffected by this change.

Our empirical analysis has implications both for policy makers and practitioners in financial markets. From a Chinese policy perspective, it is important to be aware of illicit flows – as well as its determinants – when aiming to manage the financial account. Apparently these determinants are not stable over time and have changed in particular after the financial crisis.

Our results also highlight the potential side effects of tapering off the expansionary policies that have been implemented in response to the financial crisis. These side effects may not be limited to open economies where capital can be withdrawn freely, without capital controls. But it may also affect countries like China, who manage their financial account with various control instruments. A resurgence of illicit flight in these countries would follow from the recent market turbulence as well as the US and other central banks new tightening of monetary policy.

4 thoughts on “Guest Contribution: “Does China’s Capital Flight respond to US Monetary Policy?””