Mr. Trump has proposed blocking remittances of illegally earned wages to Mexico as a means of inducing Mexico to pay for a border wall. What does this imply for financial openness?

As argued by O’Grady in the Wall Street Journal:

If Mexico refused to pay, under the Trump plan the U.S. government would invoke the revised Patriot Act to begin prohibiting aliens in the U.S. from wiring money unless they could prove that they are in the country legally.

A rewrite of the Patriot Act is the prerogative of Congress and an attempt by the executive to do it would be challenged in court and probably ruled illegal. But even if it were not, it is absurd to think that it will stop the flow of dollars to Mexico.

The most obvious way around the new provision would be for those who can prove legal residency to send the money for those who cannot. But wire transfers are only one way of moving money. It could also be deposited in a U.S. bank and withdrawn from automatic teller machines in Mexico by intended recipients.

The only way Mr. Trump might inhibit the flow of dollars to Mexico via the formal banking system would be to impose targeted capital controls. But that’s likely to violate U.S. obligations under a variety of international agreements.

I thought it interesting to compare the degree of financial openness as of 2013 (latest available data) to that implied under a closure of current account and capital account, as tabulated in the Chinn-Ito financial openness measure. This is shown in Figure 1. 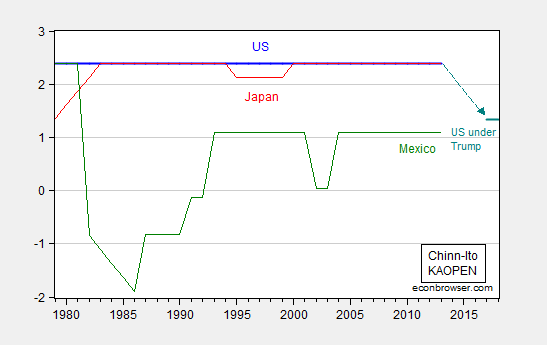 In this sense, Mr. Trump’s proposals could bring the US and Mexico together, at least insofar as measured financial openness goes. US openness would decline from maximal values to those currently ascribed to Mexico.

The Chinn-Ito index is a fairly coarse measure of financial openness. The Fernandes et al. (2015) index (described in this post, data here), based upon the finer categorizations in the IMF’s AREAER would probably provide a different measure of openness depending on the extent and nature of the controls imposed.

For more discussion of the likely effects of Mr. Trump’s proposal, see here.

2 thoughts on “US Financial Openness under a President Trump”