Today we are pleased to present a guest contribution written by Gunther Schnabl, Professor of Economics and Business Administration at Leipzig University.

Since 2015 China’s economic faith seems to have turned around. Capital flows are leaving, the Chinese yuan is under depreciation pressure, foreign reserves are shrinking and growth perspectives are gloomy. Up to recently, exports and property development have been the key growth engines. Now, growing domestic demand, supported by monetary and fiscal expansion, is regarded to be a promising growth strategy. Based on the Japanese experience I expect that this strategy is unlikely to be successful in the long run (see Schnabl 2016).

Japan is an important case study for China, as it shares similar macroeconomic characteristics. In both cases an export-oriented growth strategy has been reflected in current account surpluses, in particular versus the United States. Therefore, the exchange rates of yen and yuan against the dollar were crucial for growth. This has led – at different points of time – to exchange rate conflicts. Between 1985 and 1995, the United States exerted pressure on Japan to appreciate the yen against the dollar to reduce Japans trade surplus versus the US (“Japan Bashing”). Since the turn of the millennium, China was under pressure to let appreciate the yuan (“China Bashing”).

The fact that the Japanese and Chinese authorities allowed their currencies to appreciate paved the way to speculative bubbles, which became (Japan) or are likely to become (China) a pre-step for lasting stagnation. (The Figure shows the two real estate markets in different time periods.) With the Plaza Agreement (Sept. 1985) Japan was forced to let announce a strong appreciation of the yen against the dollar. This triggered tremendous capital inflows betting for revaluations gains. Between Sept. 1985 and Sept. 1987 the yen appreciated by 50% against the dollar, what caused a deep recession. To soften the pain, the Bank of Japan cut interest rates to an unprecedented low level. This created the breeding ground for the Japanese bubble economy. The bursting of the bubble in December 1989 is widely acknowledged to be the starting point of now 2.5 lost decades of economic stagnation.

In China, the decision to let the yuan move on a predictable appreciation path between July 2005 and July 2008 and between June 2010 and January 2014 triggered again large one-way bets on appreciation. These speculative capital inflows were often disguised as export revenues to circumvent inward-bound capital controls. Therefore, the speculative capital inflows showed up in growing current account surpluses. The capital inflows were funnelled either into additional capacities in the export sector (via the state-owned banking sector) or into the property market (often via shadow banks). This has led to overcapacities in industrial production and a real estate bubble. The paper shows how the sterilization of the monetary effects of rapid foreign reserve accumulation ensured for quite a long time via real exchange rate stabilization the clearance of the over-capacities in the export sector. Yet, now, both bubbles seem to have burst. 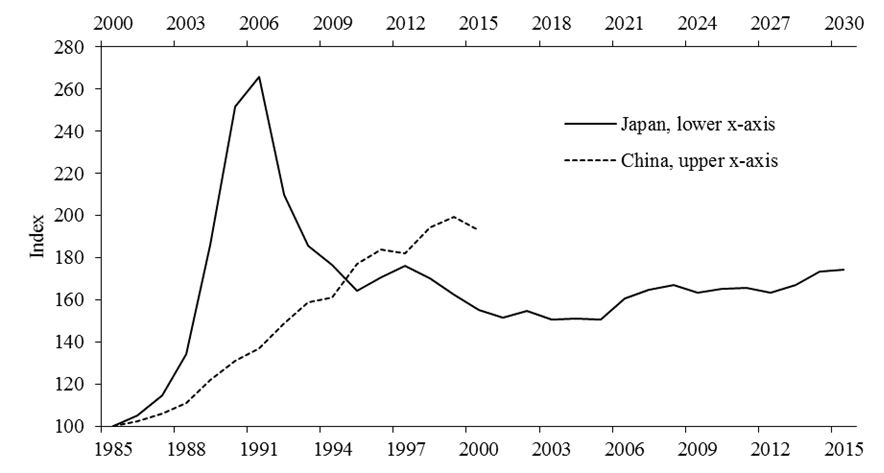 The monetary overinvestment theories by Hayek (1931) and Mises (1953) explain, why monetary and fiscal expansion in the face of bursting bubbles do not help to revive growth in the long run. Cheap liquidity provision paired with Keynesian stimulus programs in response to crisis impede the cleansing process, which is regarded as a prerequisite for the economic recovery. During the upswing – which is driven by too low interest rates – resources become bound in parts of the economy with low productivity. Therefore, a sustained recovery can only occur, when this non-productive investment is dismantled. Otherwise, growth is paralysed, because resources remain bound in non-productive parts of the economy. Higher interest rates encourage the reallocation of resources towards new investment with higher productivity. If monetary policy aims to prevent this adjustment process, a long-term economic stagnation as observed in Japan is the consequence.

This scenario is likely for China, if the country follows the Japanese crisis therapy path, which has been characterized by excessive fiscal and monetary expansion (lately dubbed Abenomics). China (as well as Japan) should therefore mimic the current attempts of the US Fed to tighten monetary policy. This would also send the right signals to the European Central Bank not to flood Europe with cheap liquidity, which paralyses growth in the south of Europe and encourages a real estate bubble in Germany.

2 thoughts on “Guest Contribution: “China Should Rebalance by Following the Fed””