The extent to which exchange rates changes affect domestic prices is an empirical question that has been the subject of a large research effort. Since at least the 1980’s, soon after the beginning of the modern period of floating exchange rates, it has been recognized that the “pass-through” of exchange rate changes to imported goods depends on a complicated mix of macro and micro factors. Almost all the empirical studies estimate coefficients of exchange rate pass-through less than unity, but different models offer a wide variety of explanations for limited pass-through. At the macro level, the degree of price stickiness, the stance of monetary policy, and the choice of invoicing currency have important implication for exchange rate pass-through. However, pass-through will also depend on microeconomic factors associated with price and markup determination and the degree of competition in traded goods industries.

While the literature has made major contributions to the understanding of how price adjustment depends on the behavior of exporting firms, one aspect that has received much less attention is the other side of the trading relationship, the role of importing firms. This perspective has become more important, however, since it has increasingly been acknowledged that a large fraction of international trade is “granular”, in the sense that the role of individual firms as buyers and sellers may be critical for the way in which prices and quantities are determined.

Using a unique micro data set that allows us to identify transactions and characteristics of all importers and exporters into Canada over a six year period, we investigate the structural determinants of exchange rate pass-through at a highly disaggregated level. In particular, we focus on the importance of the market share of firms on both sides of the market, the exporting and importing firms. Our results support a U-shaped relationship between exporter market share and exchange rate pass-through at a highly disaggregated level. Both small and very large exporting firms, relative to the market, tend to have higher pass-through than firms with intermediate market shares. 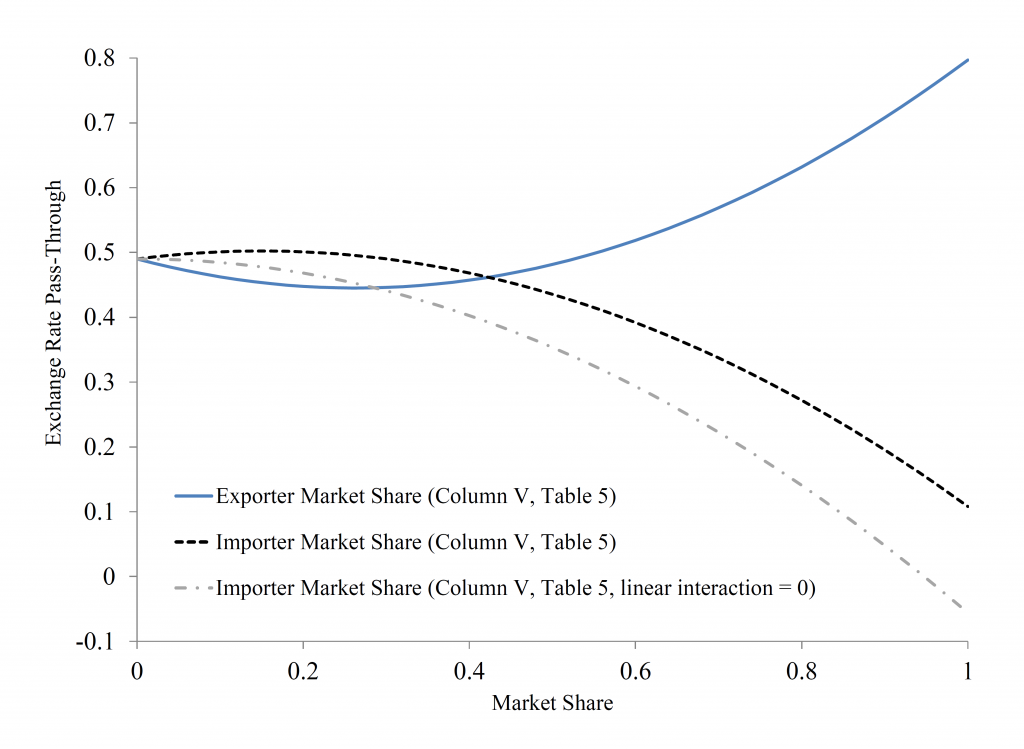