A special edition of the purchasing managers’ index (PMI) – a well-regarded survey of activity produced by research group Markit – has been published to provide a picture of how the UK economy has fared after the referendum. The picture is not pretty.

The PMI survey for Britain’s powerhouse services sector – which accounts for nearly 80 per cent of the economy – has dropped to a seven year low of 47.4 for July from 52.3 at the June survey. Any reading below 50 indicates contraction. The outcome was far lower than economists’ forecast of a reading of 48.8. 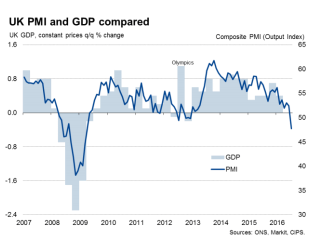 The yield curve has not yet inverted. 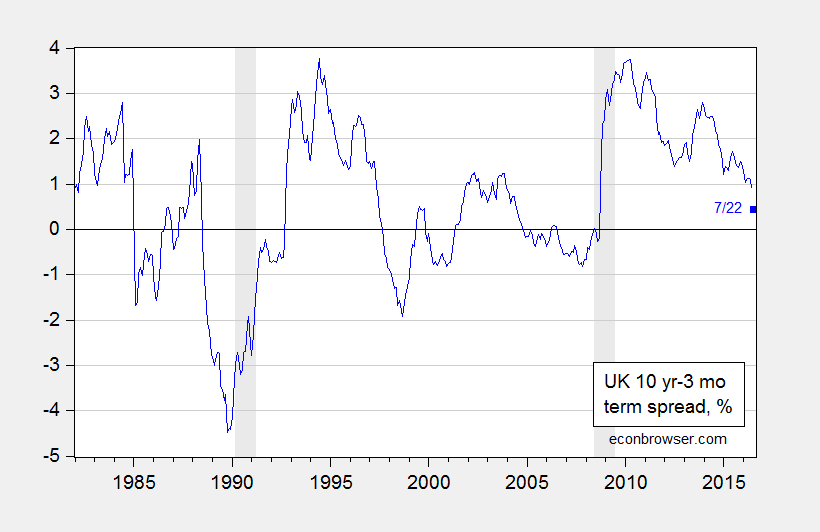 Note that, as discussed in this post, most of the flattening of the yield curve has been due to a falling long yield, rather than a rising short rate.

While the yield curve does not appear to be a reliable indicator of recessions in the UK (as defined by ECRI), there is a statistically significant correlation between yield curve and (real time measures of) GDP growth over the subsequent 4 quarters (see Chinn and Kucko, 2015).

A drop in the spread of about 0.5 (that’s the drop in the ten year since the Brexit vote) implies about a 0.25 deceleration in GDP growth.