I’m working on revisions to a draft textbook on international economics (the macro section). One thing I have to change substantially involves the discussion of parity conditions.

On interest rates, that’s due to important work that Claudio Borio, Robert Neil McCauley, Patrick McGuire and Vladyslav Sushko, all at the BIS, have published in Covered interest parity lost: understanding the cross-currency basis.

Ever since I was a graduate student (in the 1980s), it’s been taken for granted that interest rate returns expressed in common currency terms, after being hedged by use of forward rates, are equalized.

Covered interest parity (CIP) is the closest thing to a physical law in international finance. It holds that the interest rate differential between two currencies in the cash money markets should equal the differential between the forward and spot exchange rates. Otherwise, arbitrageurs could make a seemingly riskless profit. For example, if the dollar is cheaper in terms of yen in the forward market than stipulated by CIP, then anyone able to borrow dollars at prevailing cash market rates could profit by entering an FX swap – selling dollars for yen at the spot rate today and repurchasing them cheaply at the forward rate at a future date.

Yet since the onset of the Global Financial Crisis (GFC), CIP has failed to hold. This is visible in the persistence of a cross-currency basis since 2007. The cross-currency basis indicates the amount by which the interest paid to borrow one currency by swapping it against another differs from the cost of directly borrowing this currency in the cash market. Thus, a non-zero cross-currency basis indicates a violation of CIP. Since 2007, the basis for lending US dollars against most currencies, notably the euro and yen, has been negative: borrowing dollars through the FX swap market became more expensive than direct funding in the dollar cash market. For some currencies, such as the Australian dollar, it has been positive (Graph 1, left-hand and centre panels). The authors argue that, post-crisis, the widening of covered interest differentials is due to increasing limitations on arbitrage. Those limitations are then due to tighter management of capital and funding risks.

Uncovered interest rate parity is the proposition that expected interest rates, expressed in common currency terms, are equalized when capital is free to flow across borders, and assets are perfectly substitutable; for a review see this post. UIP cannot be directly tested, since expectations are not observable, but the joint hypothesis of UIP and rational expectations – sometimes called the unbiasedness hypothesis – can. This proposition implies that the slope coefficient of a regression of ex post depreciations on interest differentials should be statistically indistinguishable from unity. Figure 1 shows what the data yields (from panel regressions through 2007). 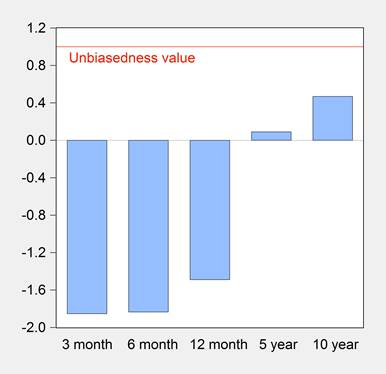 Recent developments here include more formal modeling of one explanation for the failure of the unbiasedness hypothesis using a DSGE (namely the impact of a central bank reaction function), along with incorporation of the zero lower bound. In other work, observable measures of risk and liquidity have been incorporated (see here).

More recently, research has focused on incorporating economic policy uncertainty on excess returns (the gap between realized interest rate returns expressed in common currency); some of this work was presented at this recent conference. One example in this vein is a paper by Kimberly Berg and Nelson Mark; and Husted, Rogers and Sun (see more discussion here). I think this is going to be an area where we’ll see new and interesting insights into this puzzle.