Today we are fortunate to have a guest contribution written by Zidong An (American University) and Prakash Loungani (IMF).

In August 2010, an article in Slate noted there were “two gangs of economists warring over the cause of high unemployment” in the United States. Paul Krugman, the ringleader of the “cycs” said the cause was cyclical—specifically, inadequate aggregate demand; the “strucs” blamed a host of structural factors for the increase and predicted that unemployment would not decline unless these were addressed. Six years later, which side won the battle?

Round up the only suspect

Paul Krugman wrote in 2011 that unemployment was high “because growth is weak — period, full stop, end of story.” The “strucs” had a longer list of solutions: “changes in education, immigration, occupational regulation, foreign direct investment, unemployment insurance and patent law,” according to a 2012 op-ed by Diana Furchtgott-Roth of the Manhattan Institute.

The evidence is in: growth has trumped the longer list of suspects. Figure 1 shows the relationship between the cyclical components of unemployment and real GDP using U.S. annual data. There is a very tight relationship with a R-square of 0.80 and a slope coefficient of -0.45. The recent years, shown in red in the chart, do not stand out.

In deference to the views of Jim Hamilton, these cyclical components were constructed using not the Hodrick-Prescott (HP) filter but the one that he recommends instead. In practice, using the HP filter gives similar results: a R-square of 0.78 and a slope coefficient of -0.54. The relationship between the change in the unemployment rate and the growth rate of real GDP, which does not rely on any explicit filtering, is also very strong. With quarterly data, the relationship between unemployment and output gets somewhat noisier but remains very robust (Ball, Leigh and Loungani, 2016). 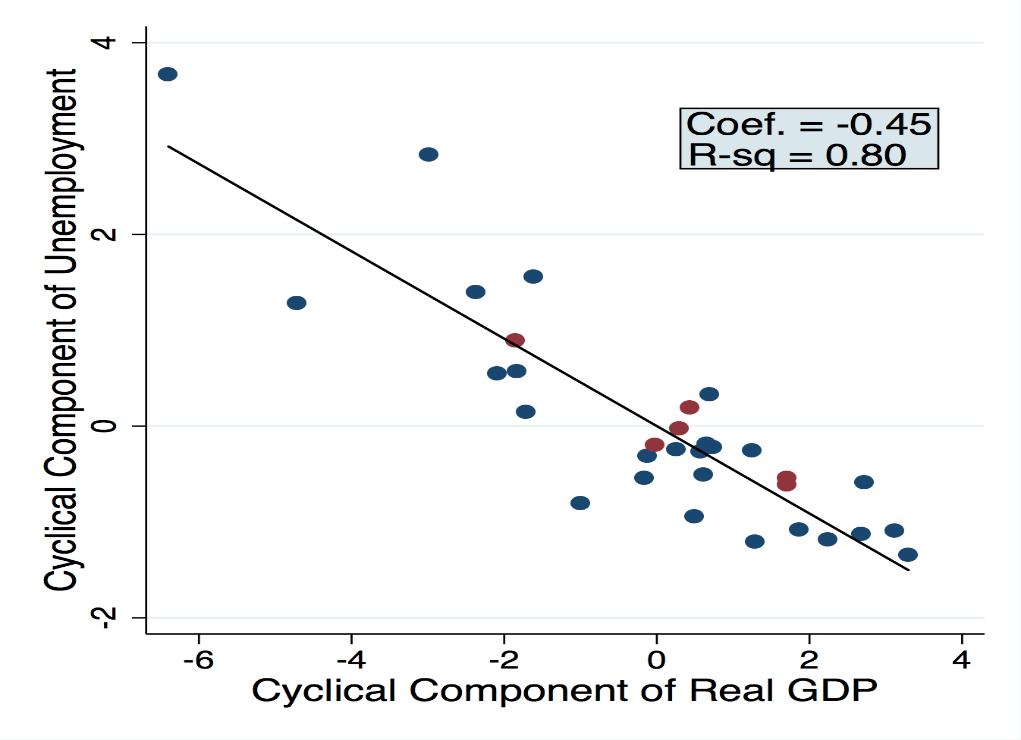 The Great Recession did not affect all U.S. states equally and the pace of the subsequent recovery also varied across states. At various times, state politicians — such as former Texas governor Rick Perry — have touted particular labor market policies they have pursued as the reason for their state’s superior employment performance. However, a sub-national look at U.S. states casts doubts on such claims and instead further bolsters the evidence that the “cycs” are right. 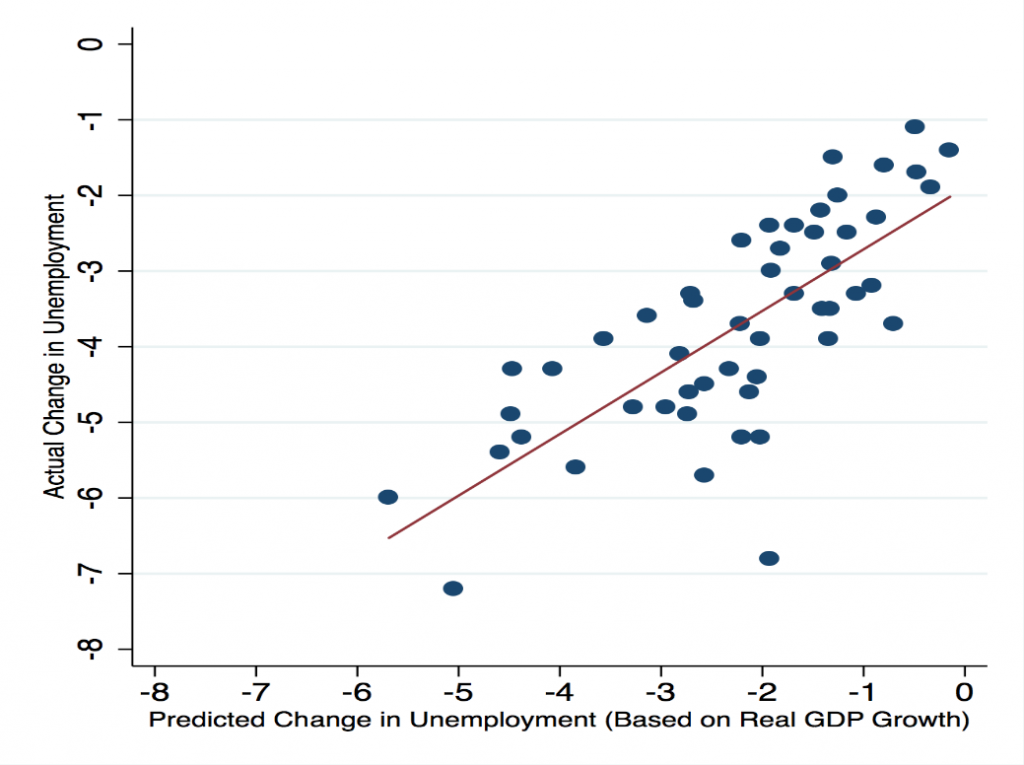 Figure 3 shows the results of a similar exercise using data on several advanced economies. This time the vertical axis shows the change in unemployment in each economy between 2010 and 2015. The horizontal axis shows what could have been predicted on the basis of the country’s real GDP growth over this period and the historical relationship between unemployment and output in the country. Once again, there is a very strong relationship between the two. In countries, such as the US and UK (highlighted in the chart), where real GDP growth has been stronger than elsewhere, the decline in unemployment rates has been sharper (Ball, Furceri, Leigh and Loungani, 2016). 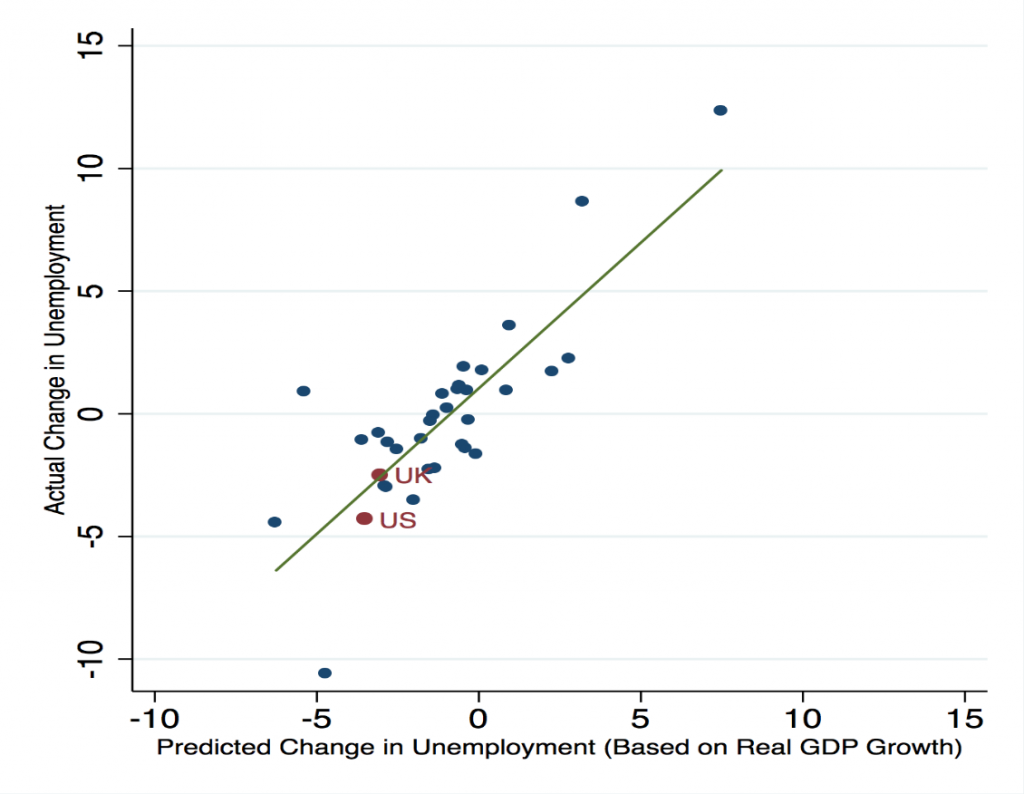 The sub-national, national and international evidence thus all point to a clear victory for those who were arguing for a cyclical explanation for the cause of high unemployment in the United States and other advanced economies. By extension, the evidence vindicates the policy prescription of aggregate demand stimulus through monetary and fiscal policies that was recommended by the “cycs”. It is unlikely that the growth differences in U.S. states and advanced countries observed over this period reflected the differential effects of structural policies. Instead, they likely reflect the timing of central bank actions (e.g. Fed vs. the ECB) and differences in the fiscal stance (Kose, Loungani and Terrones, 2013).

Of course, labor market problems remain even in countries such as the United States where conditions have improved significantly over the past few years. As Kocherlakota (who went from the camp of the “strucs” over to the “cycs”) noted recently, U.S. labor force participation has declined—the reasons for this decline and how persistent it will prove remain a matter of debate. Kocherlakota argues that cyclical conditions are still weak and uncertain enough that “raising rates or signaling a December increase would be a mistake” by the Fed. Others say the U.S. economy is now at full employment and further improvements in labor market conditions should come about through structural policies rather than monetary or fiscal stimulus. So the war between the “cycs” and the “strucs” will continue; but in a field where outcomes are never clear cut, it is good to pause and declare that the “cycs” won the battle of 2010-16.

10 thoughts on “Guest Contribution: “Battling Unemployment: A Clear Win for the ‘Cycs'””