In short: Rural areas will not like what they get from a combination of expansionary fiscal/counter-cyclical monetary policy.

We have seen expansionary fiscal policy combined with tight monetary policy before: this is the textbook case of the Reagan/Volker macro policy combination of the early 1980’s. In this case, monetary policy is not trying to wring inflation out of the system, but it is a case where each arm of policy is likely to be moving in opposite directions. (If the aggregate supply curve is kinked, and we are close to full employment GDP, then we might get more than 1.7 ppts increase in the Fed funds rate.) This is shown in Figure 1, using an IS-LM model, where the LM is flat at iT, the target Fed funds rate. As it turned out, the increase in real rates led to a remarkable appreciation of the dollar. Figure 2 depicts the evolution of real interest rates and the real US dollar during the 1980’s. (See also lecture notes for further explication.) 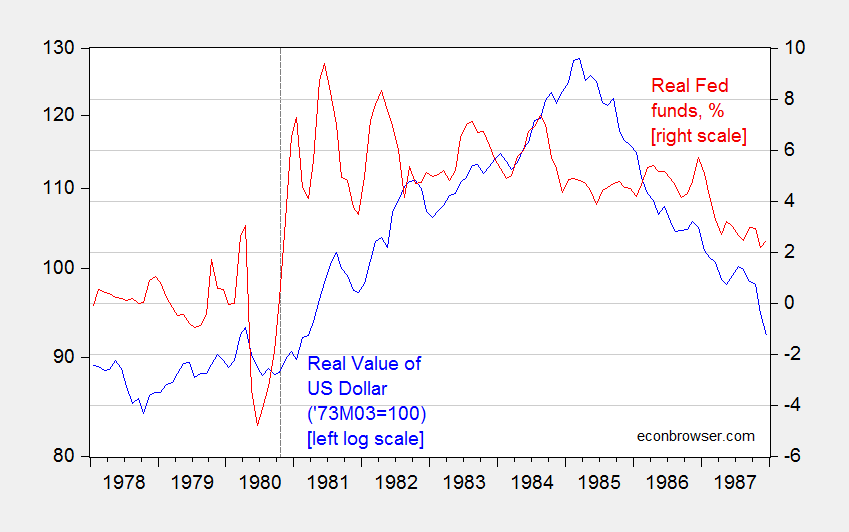 Note that the peak change in the US real Fed funds rate (proxied by Fed funds minus lagged one year CPI inflation) was about 6.9 percentage points (Oct 1980 to August 1983). The real dollar appreciated by 25% (log terms) over that same period, eventually peaking in March 1985 37% (log terms) above October 1980 levels (45%). The implied semi-elasticity of real dollar value with respect to US real interest rate is about 3.5, or 5.4 including the ascent through 1985. More formally, estimating a cointegrating relationship between the US real exchange rate and real interest rate through 2007M12 yields an estimated semi-elasticity around 8. If real rates rise by 1.7 percentage points, then the dollar will rise approximately 14% (log terms).

For evidence on interest rates and the dollar exchange rate over the more recent period of unconventional monetary policy, see this post.

One common empirical result is that the dollar’s value and commodity prices are inversely related; see for instance Akram (Energy Journal, 2009) [ungated version], and Widmar. This is apparent if one looks at a long time series of the real rate. 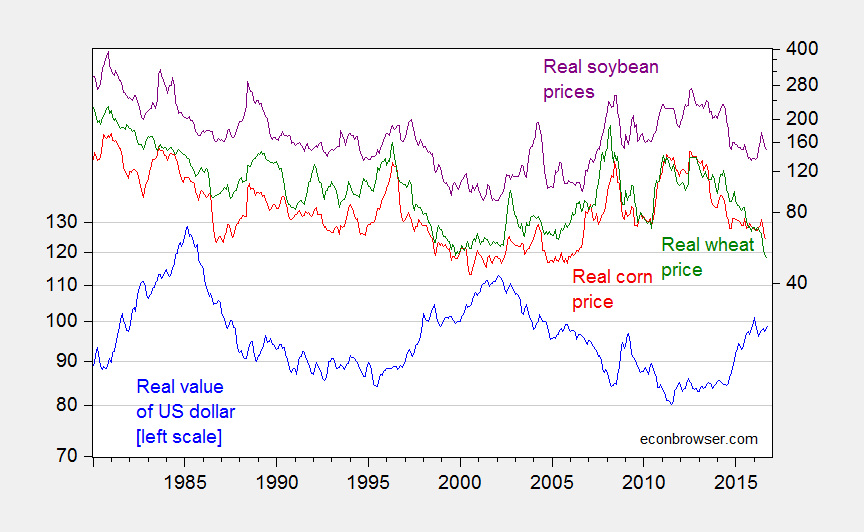 In any case, with real rates likely to rise and the dollar to appreciate, lower agricultural commodity prices are in store. To the extent that agricultural commodity prices are tightly linked to rural incomes, rural household incomes are likely to come under pressure in the coming years. Should higher interest in the US cause emerging market crises (e.g., [2]) that reduce demand of agricultural commodities, that conclusion applies with even more force. And I haven’t even talked about retaliation against unilateral moves by the US on trade policy (remember that jump in exports last quarter? — that was soybeans; a lot exported to China).

Next up: the return of the twin deficits? 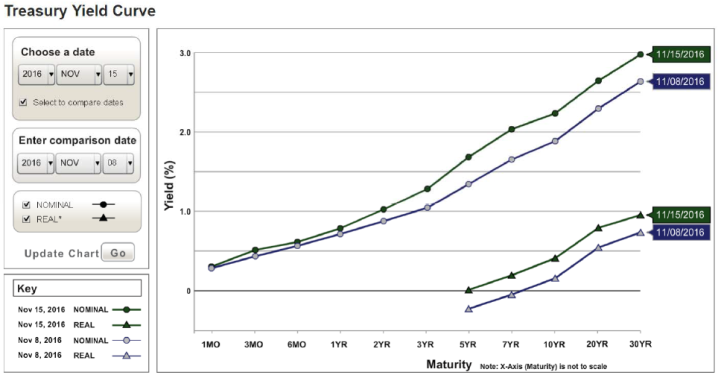