I was astounded not only by the outcome of the U.S. presidential election but also by the response of financial markets.

Of course I was not the only one who experienced shock on November 8. As polling results came in that night, S&P 500 futures prices plunged 5%. Paul Krugman offered this immediate assessment:

It really does now look like President Donald J. Trump, and markets are plunging. When might we expect them to recover?…. a first-pass answer is never.

But it turned out that the market recovered all of that loss the next morning. And stocks ended last week 2% higher than they had been before the election. 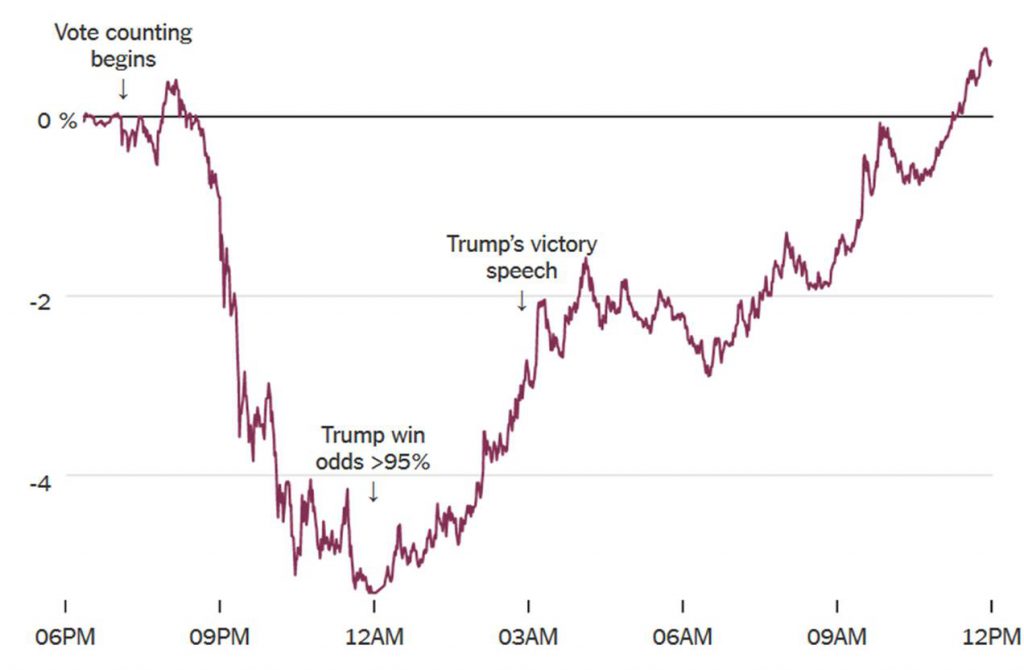 The same thing happened to exchange rates. The dollar fell 2% in overnight trading, only to make it all back the next day. Today the dollar is up 4% against the euro, 5.6% against the yen, and 10% against the Mexican peso, compared to before the election. 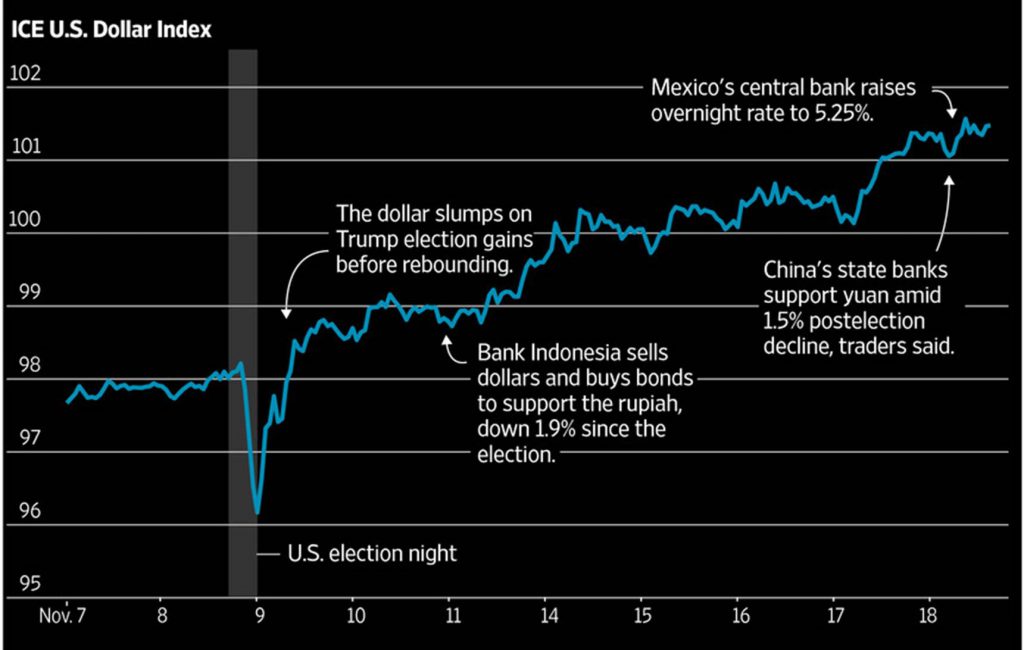 And long-term U.S. interest rates, which had been sinking all year on a growing consensus of dimmer prospects for long-term growth, are now up almost 50 basis points since the election.

Yield on 10-year U.S. Treasury security as reflected in the price of CBOE TNX contract. Divide by 10 to get interest rate in annual percentage points.

What does all this mean? Krugman offered this reassessment on the Friday after the election:

[Trump] will, in fact, be a disaster on every front… But it’s important not to expect this to happen right away. There’s a temptation to predict immediate economic or foreign-policy collapse; I gave in to that temptation Tuesday night, but quickly realized that I was making the same mistake as the opponents of Brexit (which I got right). So I am retracting that call, right now. It’s at least possible that bigger budget deficits will, if anything, strengthen the economy briefly.

Justin Wolfers was another observer surprised by the market turnaround, and offered this interpretation:

Call it a failure of imagination. Investors simply failed to imagine how they might feel when they woke up to President-elect Trump…. I know that my thoughts in the days after Mr. Trump’s win are different than those that dominated my election-eve conversations.

So what exactly should we see more clearly now? I think one thing we may reasonably expect is less regulation of banks, energy companies, and utilities, which could increase near-term profitability. Financials figured prominently in the recent stock-market gains.

We also are likely to get some significant fiscal stimulus. Both Clinton and Trump had advocated new infrastructure spending as part of their campaign proposals. If Trump and the Republicans are able to find some common ground with Democrats on this issue, it could be an important step in trying to heal some of the deep wounds this election inflicted. There will surely also be some significant tax cuts as well. Calculated Risk notes this assessment from Goldman Sachs:

For most of the last eight years, policymakers have been solely focused on shoring up the recovery; today they also must consider the risk of overdoing it. Given above-trend growth, and with the prospect of fiscal stimulus, we see the US economy moving into modest disequilibrium over the next 1-2 years, with an unemployment rate falling below its long-run sustainable rate, and inflation rising above the Fed’s target.

The Federal Reserve may not have sufficiently powerful tools to get inflation back up to 2%. But the new Administration and Congress likely do. Though as interest rates and the deficit rise, we may once again soon be wondering what the plan is for keeping the debt-to-GDP ratio from growing unsustainably.

But for now, markets seem less worried about the prospect of President Trump than many of us would have imagined three weeks ago.

33 thoughts on “Mr. Trump and the markets”