One of the exciting implications for economists of the digitization of everything is the ability to study economic relations and behavior at a level of detail far beyond anything that could have been attempted a decade ago. I’ve earlier called attention here to new measures of inflation obtained from millions of prices posted on the web, new insights into pricing behavior coming from scanner data on individual store transactions, and understanding of consumer behavior based on debit and credit transactions of 25 million Americans. Here I discuss another new study based on smart-phone apps.

Here for example is the kind of data we used to rely on. It comes from the Bureau of Labor Statistics’ Consumer Expenditure Survey, which asks people to report how much they spend on gasoline each month. It’s obvious that at a minimum there is a lot of rounding and reporting error, with people reporting $200/month instead of $190 or $210, for example. 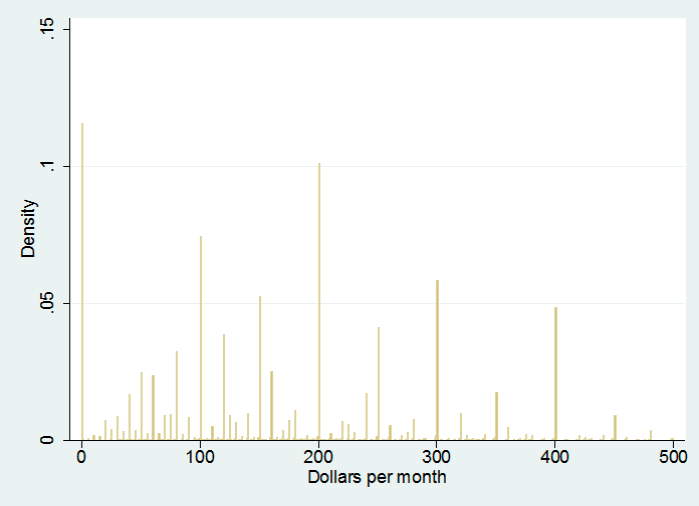 By contrast, the authors find over 20% of app users make no gasoline purchases in any given month. Once the zero spenders are taken out, we see as expected that spending is more smoothly spread out. 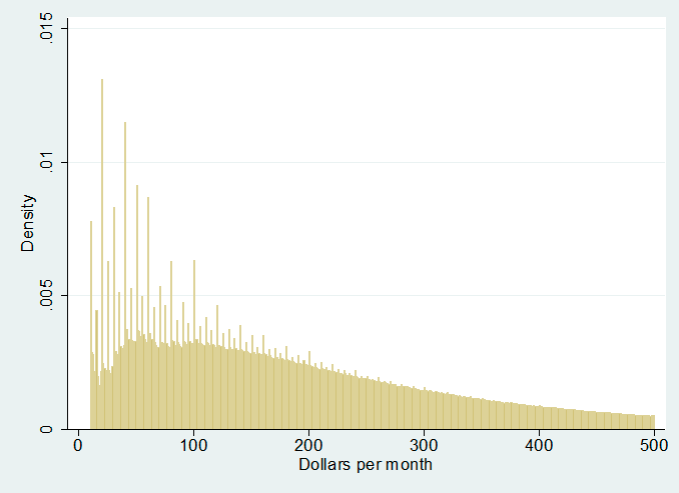 The particular focus of the paper is on how consumer spending changed in response to the big drop in gasoline prices in 2014. Lower gasoline prices meant a big windfall in spending power for the people at the right end of the above distribution, who had been spending hundreds of dollars each month on gasoline, compared to those at the left end, who spent little or nothing. The authors find that consumers essentially spent all of the money they saved on gasoline on other goods and services. That finding is similar to the JP Morgan Chase Institute analysis of individual debit and credit transactions as well as Baumeister and Kilian’s recent analysis of aggregate U.S. consumption spending in response to the oil price decline.

And it’s also consistent with something I’ve been saying here for a long time: changes in oil prices are an important factor in driving changes in consumer spending.