Christiane Baumeister and Lutz Kilian presented an interesting paper at the Brookings Institution last week that takes a detailed look at the effects on the U.S. economy of the dramatic oil price decline of 2014-2015.

An oil price decrease loosens consumers’ budget constraints, and historically this tends to show up as higher consumption spending. I had done some earlier analysis suggesting that might not be happening this time. But Baumeister and Kilian update those calculations and conclude that there was a significant boost to consumer spending, noting that real consumption spending grew on average by 3.1% over the two years since oil prices began falling in 2014:Q3 compared with only 2.0% during the preceding two years. Their conclusion is also consistent with the finding from a JP Morgan Chase Institute analysis of individual credit card histories.

The U.S. imports 6 million more barrels of crude petroleum and refined products than it exports every day. Between June 2014 and March 2016 the real price of oil declined by 68%. As a net oil importer, the fact that Iraq and Iran are now willing to sell us more oil at a lower price should be good news for the U.S. economy. In idealized economic models, the resources that had been producing oil should now shift to producing other goods, and with the new terms of trade we should as a result be even more productive than before.

But in the real world shifting resources is easier said than done. We now have a large stock of capital that was being used to develop U.S. shale oil, and contrary to the predictions of simple economic models, there is not some other more productive place to use that equipment. One very interesting part of Baumeister and Kilian’s analysis was a look at the performance of individual sectors. Somewhat surprisingly, there wasn’t even any significant gain in the transportation sector, the one area you might have expected to enjoy the biggest windfall from lower oil prices. The weak performance in transportation comes from a big drop in rail shipments, dominated by lower rail transport of petroleum. Idealized economic models treat capital as if it’s a big fungible lump that you can use wherever it’s most productive. But it turns out to be not that easy to try to carry milk in an old oil tanker rail car. 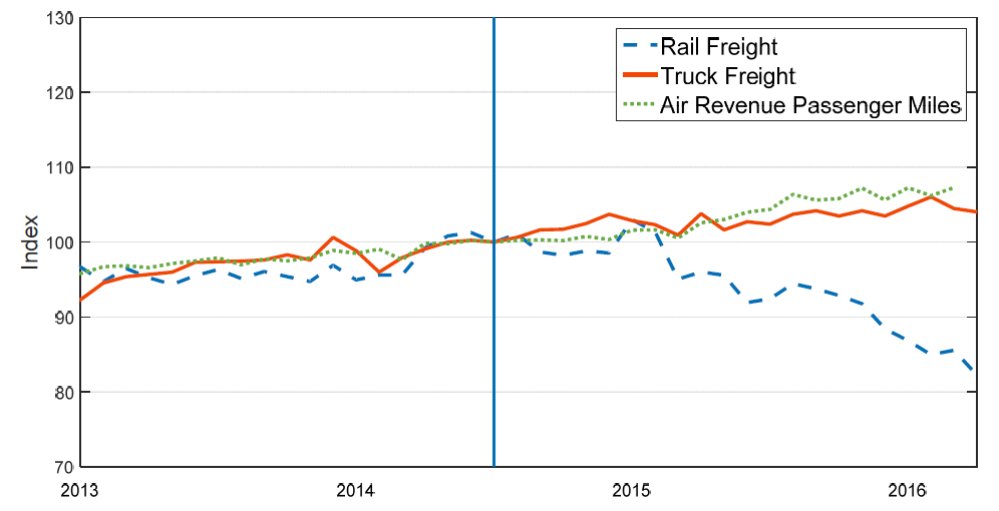 Their paper examined a number of details of the economic response. The bottom line is that there seemed to be little net stimulus to the U.S. economy from the collapse in oil prices.