The yuan is sliding against the dollar. What about against other currencies?

This figure, drawn from Louis Kuijs at Oxford Economics (not online), illustrates the decline in nominal terms. 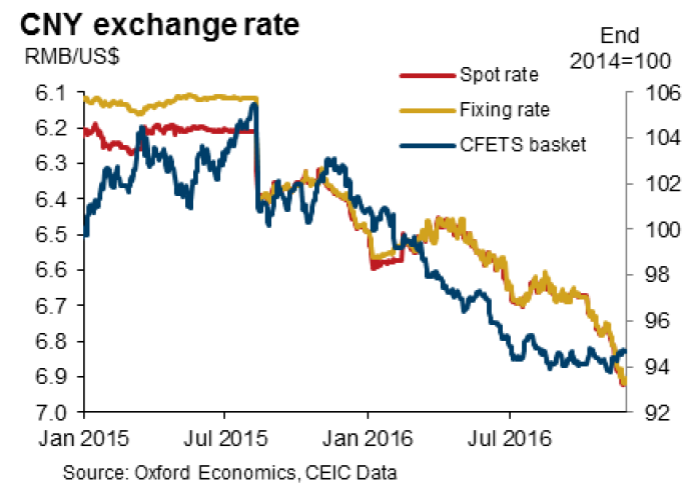 The figure shows that against the CFETS basket established last year, the yuan has also fallen. Earlier views that Chinese policymakers would maintain rough stability in this measure have thus been unfulfilled. On the other hand, the CFETS basket always seemed to me an odd basket to target. And in any case, the “real” value of the currency is what is important for many macroeconomic issues. Here, as shown in Figure 1, there is a marked divergence between the nominal bilateral and the real trade weighted. 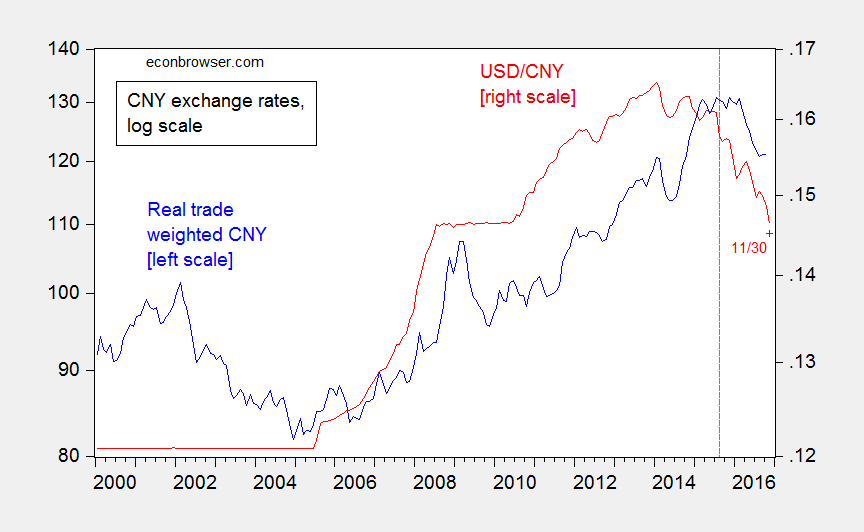 What is the future path of the yuan? Since the yuan is a managed exchange rate — with the People’s Bank of China (PBoC) currently intervening to keep the yuan stronger than it otherwise would be — the answer to that question surely depends on the authorities’ objectives (and views of the long run equilibrium value of the exchange rate, see this post). Kuijs argues:

In the face of such outflows, there may be a case for reducing or even abandoning FX intervention and letting the FX market pressures drive the CNY weaker. This would limit or even halt the bleeding of FX reserves and could reset expectations for the CNY going forward.

However, while capital account factors point to further depreciation, in terms of the real economy there is no obvious case for significant further trade-weighted depreciation. Indeed, China still runs a healthy current account surplus and the global market share of its exports is still rising.

In such circumstances, a significant depreciation may lead to overshooting, which is unhelpful for the real economy. This is an issue for China’s policymakers, as they tend to employ a ‘real economy’ perspective on exchange rate policy. A rapid, large depreciation could also compromise confidence in the CNY, spark turmoil in global FX markets and garner unfavourable reactions from politicians around the world.

The case for resisting a significant depreciation that is not warranted in terms of the real economy would also fit with the government’s objectives to rebalance the economy, improve the industrial structure and move up the value chain.
Such considerations make steps to reduce capital outflows more likely than significant depreciation.

On the other hand, the determination of the authorities to rebalance the economy will surely be tested if growth slows down more than anticipated. In other words, to the extent that policy authorities cannot completely control the economy’s evolution then it’s possible that the choice will be for a weaker yuan. That’s essentially (I think) behind Brad Setser’s contention that there are possible multiple equilibria for the yuan:

I would argue that there aren’t just multiple possible exchange rate equilibria for China, there are also at least two different possible macroeconomic equilibria.

In the “strong” yuan equilibrium, outflows are kept at a level that China can support out of its current goods trade surplus (roughly 5 percent of GDP), which translates to a current account surplus of around 2.5 percent of GDP right now, though it seems likely to me that an inflated tourism deficit has artificially suppressed China’s current account surplus and the real surplus is a bit higher.**

In this equilibrium, a larger “on-budget” central government fiscal deficit—together with an expansion of social insurance—keep demand up, even as investment falls.

In the “weak” yuan equilibrium, China lets the market drive its currency lower—and a weaker currency increases the trade and current account surplus. Such surpluses would finance sustained capital outflows in excess of half a trillion dollars a year without the need to dip further into China’s reserves.

3 thoughts on “The Yuan: Nominal Bilateral vs. Basket vs. Real Trade Weighted”