A legislated monetary policy rule was first proposed by John Taylor (2011). By the end of 2015, legislation along the originally proposed lines had passed the House Financial Services Committee, the Senate Banking Committee and, as the Fed Oversight Reform and Modernization Act, the House of Representatives. The proposed legislation would require the Fed to specify a numerical rule which relates the federal funds rate to inflation and a measure of real economic activity, and to report to Congress if it deviates from the rule. The results of the Presidential election have increased the likelihood that some variant of the legislation will be enacted.

We proceed to discuss the three criteria.

Criterion 1: Economic Performance over a Long Historical Period. In another new paper, Policy Rules and Economic Performance, we calculate quadratic loss ratios, the (inflation plus unemployment) loss in high deviations periods divided by the loss in low deviations periods, where a good policy rule will have a large loss ratio, from 1965 to 2015 for the 100 policy rules with α and γ between 0.1 and 1.0 in increments of 0.1. The results for the 12 rules are shown in Table 1. The inflation gap tilting rules are in the first (best performing) quintile, the balanced rules are in the second and third quintiles, and the output gap tilting rules are in the fourth and fifth quintiles with the worst performance. The preference for inflation gap tilting rules is in accord with Laubach and Williams (2015), who discuss the implications of uncertainty in real-time measures of the equilibrium real interest rate which are relevant for policy and advocate a strong response to inflation in order to reduce the importance of accurately measuring the equilibrium real interest rate. 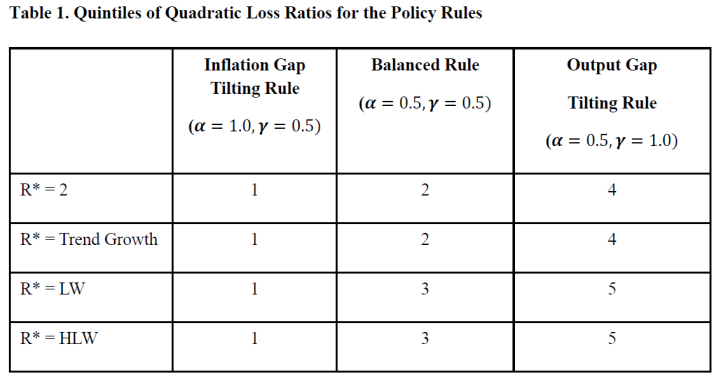 Criterion 2: Fed Policy Following the Great Recession. If the Fed were to adopt a rule, it seems self-evident that it would want to choose a rule which was in accord with recent, current, and projected policy. Between 2009 and 2015, we use the shadow federal funds rate from Wu and Xia (2016) as a measure of Fed policy which incorporates quantitative easing and forward guidance. Table 2 reports the average of the policy rule deviations between the prescribed and shadow federal funds rate. The four lowest deviations are for the balanced and inflation gap tilting rules with LW and HLW equilibrium real interest rates, with the smallest deviation being for the Yellen (2015) rule. The Taylor (1993) and Yellen (2012) rules have larger deviations. 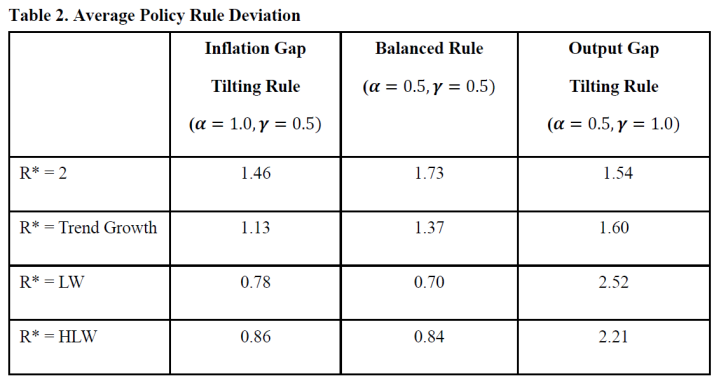 These results relate to the proposed policy rule legislation. In an earlier paper, Policy Rule Legislation in Practice, we use a threshold of two percentage points to define a deviation from a legislated rule. Table 3 reports the number of quarters between 2009:Q1 and 2016:Q3 where the absolute value of the difference between the prescribed and shadow federal funds rate was greater than two percent. The most striking result is that there are no periods since the Great Recession with deviations greater than two percent for either the balanced or the inflation gap tilting versions of a policy rule with LW equilibrium real interest rates. Under this criterion, if the Fed had adopted the Yellen (2015) rule in 2009, there would have been no subsequent periods with deviations large enough to trigger Congressional testimony. 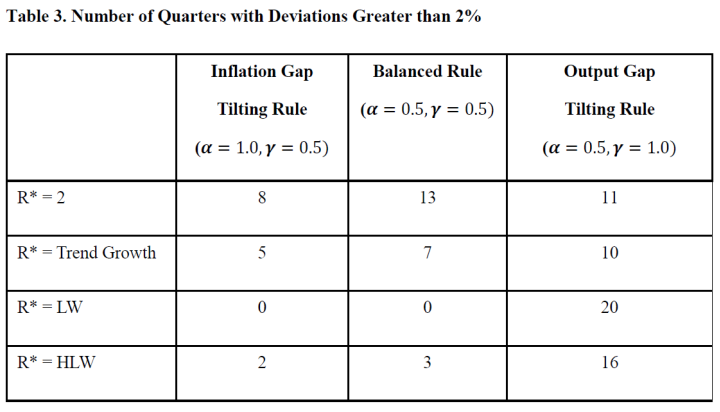 Criterion 3: Current and Projected Fed Policy. At the September 2016 FOMC meeting, the members voted to keep the target range for the federal funds rate at between 0.25 to 0.50 percent, although three regional bank presidents dissented in favor of raising rates. Table 4 reports the prescribed federal funds rate at the time of the meeting for the 12 rules. The closest to the Fed’s target is the inflation gap tilting rule with LW equilibrium real interest rates, although the other three balanced and inflation gap tilting rules with LW and HLW rates are also close to the target. Both the Taylor (1993) and Yellen (2012) rules prescribe a much higher policy rate. The paper also presents evidence that the balanced and inflation gap tilting versions of the Yellen (2015) rule are consistent with the Fed’s Summary of Economic Projections going forward. 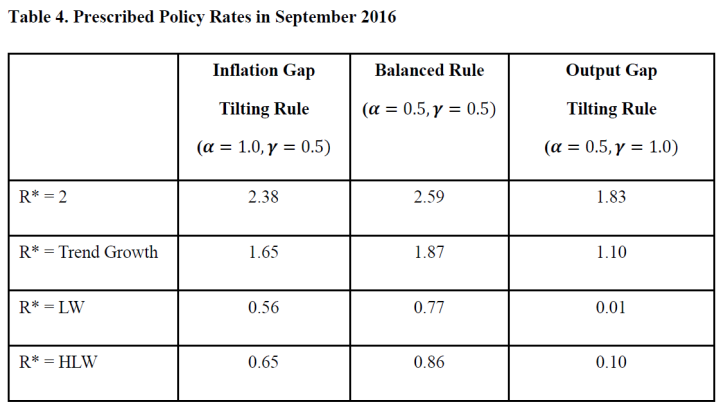 The next meeting of the Federal Open Market Committee (FOMC) is scheduled for December 13-14 and it is widely expected that the FOMC will raise the target range for the federal funds rate to between 0.50 and 0.75 percent. At this time, core PCE inflation is 1.7 percent, the output gap projected by the Congressional Budget Office for the end of 2016 is -1.34 percent, and the LW equilibrium real interest rate is 0.18 percent. Using these numbers, the prescribed federal funds rate is 1.06 with the balanced and 0.91 with the inflation gap tilting versions of the Yellen (2015) rule. If the FOMC had raised the rate in September, it would have been exactly on target with another rate increase in December. Since the rate wasn’t raised in September, a December rate increase will leave the Fed only one 0.25 percent increase in the federal funds rate behind the prescriptions.